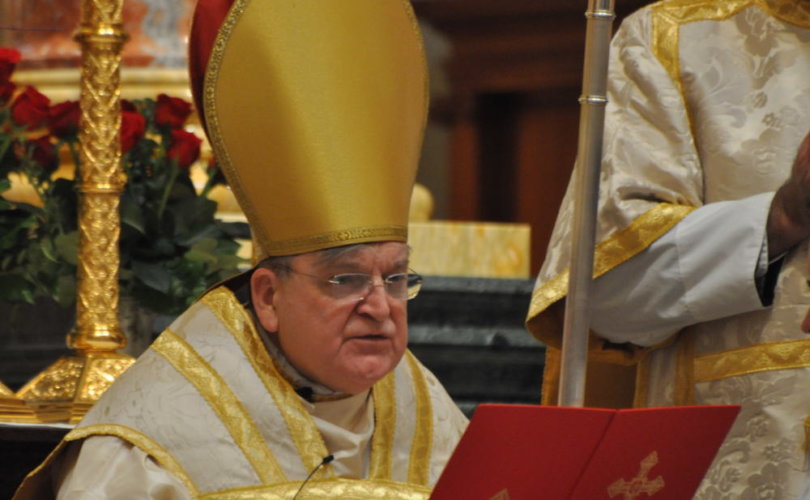 Cardinal Raymond Burke offers a Pontifical High Mass on December 10, 2016, at the Shrine of Our Lady of Guadalupe, La Crosse, Wisconsin.Lisa Bourne / LifeSiteNews

Update: LifeSiteNews has now released the full text of our interview with Cardinal Burke (HERE), and a second article on the interview: Cardinal Burke: When you’re insulted for defending truth, ‘adhere ever more strongly’ to Church.

December 19, 2016 (LifeSiteNews) – In an exclusive interview with LifeSiteNews, Cardinal Raymond Burke has given an indication of the possible timeline of a “formal correction” of Pope Francis should the Pope not respond to the five dubia seeking clarity on Amoris Laetitia, presented to the Pope by four Cardinals, including Cardinal Burke.

“The dubia have to have a response because they have to do with the very foundations of the moral life and of the Church’s constant teaching with regard to good and evil, with regard to various sacred realities like marriage and Holy Communion and so forth,” Burke said during a telephone interview.

“Now of course we are in the last days, days of strong grace, before the Solemnity of the Nativity of Our Lord, and then we have the Octave of the Solemnity and the celebrations at the beginning of the New Year – the whole mystery of Our Lord’s Birth and His Epiphany – so it would probably take place sometime after that.”

The cardinal, who is the patron of the Sovereign Order of Malta, said the format of the correction would be “very simple.”

“It would be direct, even as the dubia are, only in this case there would no longer be raising questions, but confronting the confusing statements in Amoris Laetitia with what has been the Church’s constant teaching and practice, and thereby correcting Amoris Laetitia,” he said.

The exhortation has caused widespread confusion in the Catholic Church since its release in April, largely due to its ambiguity on important moral questions. This has caused various bishops as well as bishops’ conferences to interpret the document, at times, in ways that are at odds with Catholic teaching on marriage, sexuality, conscience, and reception of Holy Communion. For example, the bishops of Buenos Aires and Bishop Robert McElroy of San Diego have interpreted the document as allowing civilly divorced and remarried Catholics who are living in adultery to receive Holy Communion in certain cases. The Pope himself wrote to the Buenos Aires bishops to praise their guidelines, saying there was “no other interpretation.”

Cardinal Burke, along with Cardinals Walter Brandmüller, Carlo Caffarra, and Joachim Meisner, submitted the dubia, five yes or no questions, in September seeking clarity from Pope Francis on whether the exhortation conforms to Catholic moral teaching. When the Pope did not issue a response after two months, the cardinals released the dubia publicly. It was after this that Cardinal Burke disclosed that a formal act of correction would be necessary, if the Pope refused to clarify the meaning of his exhortation.

While such an act of formal correction is something rare in the life of the Church, it is not without precedent.

Pope John XXII in the 14th century was publicly challenged by cardinals, bishops, and lay theologians after denying the doctrine that the souls of the just are admitted to the beatific vision after death, teaching instead that heaven is delayed until the general resurrection at the end of time. Pope John eventually recanted his position, due in part to a joint letter from theologians from the University of Paris that professed total obedience to the pope while making it clear to him that his teaching contradicted the Catholic faith.

Burke called the procedure of correcting the error of a pontiff a “way of safeguarding that office and its exercise.”

“It’s carried out with the absolute respect for the office of the Successor of Saint Peter,” he said.