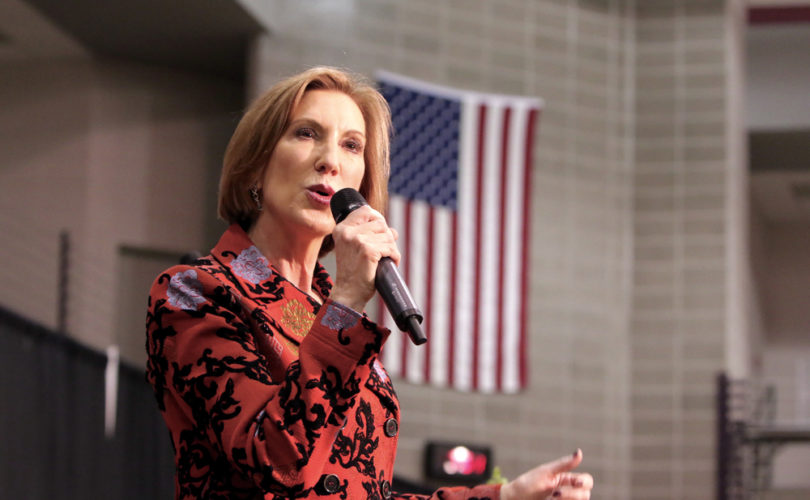 WASHINGTON, D.C., January 18, 2016 (LifeSiteNews) – She vowed she would not sit down and be silent about abortion. Now, Republican presidential hopeful Carly Fiorina tells LifeSiteNews exclusively that she is excited to give the keynote speech at this week's March for Life.

“The policies of this administration have continued to threaten the very character of our nation,” Fiorina told LifeSiteNews this morning. “It is time for a president who will stand for life and religious liberty.”

“I am proudly pro-life and look forward to speaking at the March this week,” Fiorina told LifeSiteNews.

Fiorina, who ran for the U.S. Senate seat in California as a pro-life candidate, vowed at the last Republican debate in South Carolina that she will not stop.

“All of my life, I have been told to sit down and be quiet. Settle…Don't challenge the system,” she said in her closing statement.

“That's what the American people are being told now and we have been told that for way too long — sit down and be quiet about our God, about our guns, about the abortion industry,” she said, taking aim at Gov. Nikki Haley's response to the State of the Union address. “Settle for illegal immigration that's been a problem for decades, as so many of our problems have festered for decades.”

“I will not sit down and be quiet, and neither will you,” she concluded.

The 2016 annual March for Life takes place next Friday, January 22, the 43rd anniversary of the Supreme Court's Roe v. Wade decision that promulgated a woman's constitutional right to an abortion as a penumbra of the right to privacy. This year's theme is “Pro-Life and Pro-Woman Go Hand-In-Hand.”

A musical performance begins at 11:40 a.m. at the Washington Monument, with the main presentation beginning at 12 noon.

“Carly Fiorina will be among many inspiring women who can share their testimony as female advocates of pro-life issues,” said Jeanne Mancini, president of the March for Life Education and Defense Fund. “Her national profile and work in the pro-life movement embody this year’s theme. Pro-life female speakers will also include Sen. Joni Ernst and Mrs. Marjorie Dannenfelser, who will introduce a video created to inspire young pro-life women to consider running for elected office.”

In addition to Fiorina, Ernst, and Dannenfelser, Mancini says the following speakers have been confirmed for Friday's event:

“The pro-life movement will be losing a true leader in Congress with the retirement of Congressman Pitts,” Mancini said. “We praise his leadership as head of the Values Action Team, a coalition of pro-family members [of Congresss], and as chair of the Health Subcommittee in Energy and Commerce.”

“We are also deeply grateful for the example he has set for other members of Congress,” she added, “in approaching his position with courage and humility.”