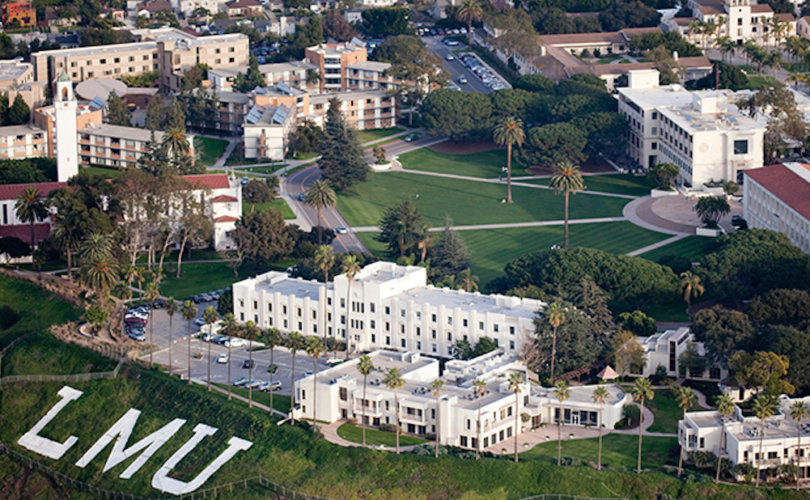 LOS ANGELES, May 10, 2016 (LifeSiteNews)—A Catholic university suspended an employee last month for telling students that there are only two genders.

The employee’s husband told LifeSiteNews that his wife was suspended for two weeks and faces ongoing hostility from Jesuit-run Loyola Marymount University for her Catholic beliefs.

According to a press release from LMU’s Gender Sexuality Alliance, LGBT Student Services put up signs advertising Rainbow Week events and “depicting facts about LGBTQ+ issues.”  Sometime between 9:30 a.m. and 12:00 p.m. on April 14, the signs were “removed and trashed, hidden next to a nearby trash can.”  Students from LGBT Student Services put the fliers back up when “an LMU employee emerged from Von der Ahe building and aggressively confronted the students.  The students engaged her in conversation and she replied hatefully,” according to the press release.

The employee had a civil conversation with the students, her husband said, and they shook hands at the end of it.

“At no time was any one of us hostile to each other,” the LMU employee said in her official statement about the incident, which her husband provided to LifeSiteNews.  “The dialogue never got heated or out of control.  No one asked to stop or indicated they were being ‘hated’ on or hurt.  The girls engaged me in the dialogue, I answered their questions, and gave my opinion and they gave me theirs.”

“The messaging on the signs [was] very offensive to me as a Catholic working on a Catholic campus,” the employee said.  “The messaging was very anti-Catholic and a direct hit against the principles of the faith.  Every time I walked by them I experienced great sorrow and an aching pain within the very depths of [my] soul.  My conscience was telling me this is not right.”

They asked if I read them and I indicated I did, all of them.  They expressed excitement that I had read them, stating[,] ‘Great[,] no one comes up to us to dialogue, we welcome your dialogue.’  We then engaged in what I thought was a healthy ‘dialogue’, the word they chose to use for our engaged conversation.  I felt it was a good exchange of ideas and opinions.

‘The girls tried to bait her’

According to the Gender Sexuality Alliance, the LMU employee “[denied] the existence of transgender people,” and claimed that only men and women exist.  The LMU employee apparently also referred to one of the students as a “man,” despite his “gender non-conforming identity.”

The employee’s husband said that his wife told the students that she loves everyone and that she’s called to love everyone.

“A couple of times the girls tried to bait her,” into saying something hateful, he said, but his wife simply expressed the Catholic view that men and women are perfectly made for a procreative union with each other.

The Catechism of the Catholic Church teaches, “Everyone, man and woman, should acknowledge and accept his sexual identity” (CCC 2333).

According to LMU’s own rules, on-campus advertising “must be compatible with the University’s mission.” And according to LMU’s mission statement, “The University is institutionally committed to Roman Catholicism and takes its fundamental inspiration from the combined heritage of the Jesuits, the Marymount Sisters, and the Sisters of St. Joseph of Orange. This Catholic identity and religious heritage distinguish LMU from other universities and provide touchstones for understanding our threefold mission.”

California Catholic Daily printed an email from the accused employee’s husband, which the husband referred LifeSiteNews to as an accurate account of the incident:

Yesterday (Thursday) my wife came home from work very excited and happy about a conversation she had with a couple of students at work. She has worked at Loyola Marymount for the last 15 years in the Alumni department. The students were placing signs along the walkway of the University promoting among other things, “PanSexuality”, meaning any and all sexual preferences. These girls were member of the LGBTQ group at LMU. LMU still calls itself a Jesuit Catholic University.

At the time my wife was talking to alum, who thankfully heard the entire exchange. After determining they had permission to post the signs, the group engaged in a what my wife thought was a very good dialogue of ideas and opinions. The girls were posting signs promoting the various sexual activities and orientations of the LGBTQ. My wife is Catholic and a strong supporter of the Church, marriage and family, and Catholic morality. Of particular focus was the girls promotion of what they label “PanSexual” i.e. someone who participates (or prefers) every kind of sexual encounter. One of the girls identified herself as lesbian and accused my wife of not loving women. My wife pointed out she was called to love everyone, including the girls. She said she found the whole sexual labeling thing was causing confusion especially in the youth whose sexuality is still malleable. The girls agreed with my wife that they too disagreed with the ideas behind Pan-sexuality, claiming they wanted monogamy, but wanted to give it a label so people could identify themselves. My wife pointed out that this was promotion of these lifestyles not just labeling and this was offensive to her heart. It was lovingly expression of disagreement, and a legitimate exchange of ideas and reasons, with my wife defending the Truths of the Church, and listening with love to these girls ideas.

One girl did ask if she thought they were going to hell, to which my wife gave the only legitimate Catholic response, that she could never say anyone is going to hell and “I’m not called to judge that”. However she could and had a right to disagree with signage that contradicted Catholic morality, especially at a so called Catholic University. My wife pointed out that none of the signs promoted Catholic teachings, it was the girls who suggested that Campus ministry place a sign promoting the Catholic idea of relationships next to their signs next year. My wife of course agreed. At the end everyone shook hands and my wife invited them into the Alumni office anytime they wanted to talk more. The girls express out loud how much they enjoyed the opportunity to ‘dialogue’ on these subjects with my wife.

Everyone thanked the other upon leaving, the girls thanking my wife for her opinions and “appreciated the dialogue’. My wife agreed.

The husband continued, “My wife was informed this morning that she is suspended from her job of 15 years pending an investigation of this ‘incident,’” despite the fact that “no one got her side of the story.”  The employee’s husband also wrote that no one spoke to the alumni witness who could verify the employee’s account of the conversation.

The employee’s husband provided to LifeSiteNews the witness’s statement, which described the LMU employee as non-judgmental.  The witness also denied that the LMU employee referred to one of the students as a “man.”

The student said that she was ‘gay’ and that she knew she was gay at the age of 3 years old. Then the student asked…if she hated gays. [The employee] said, ‘Absolutely not. I don’t hate anyone. My Catholic Faith teaches me to love everyone. I love you.’  The girl then said, ‘You don’t believe in transgender then?’ [The LMU employee] said, ‘No, I don’t. There are only males and females, that’s the truth. You have a female body and all the female parts as God intended.’ Then the girls got into a discussion that everyone is not the same in terms of body parts but [the LMU employee] said they still were male and female and the differences did not change that.

No-one from the University talked to my wife before the Loyolan article was written, or before she was suspended and sent home. My wife, when she read the article, immediately went to her supervisor to protest the accuracy of the article. Her supervisor refused to talk to her and simply sent her home to let HR investigate.

In response to the LMU employee’s defense of Catholic teaching, around 30 students and 20 faculty and staff members organized a protest the following week “in solidarity with LGBTQ+ members and other marginalized groups on campus,” The Loyolan reported.

“At this point the investigation is still continuing,” Celeste Durant, LMU’s Director of Media Relations, told LifeSiteNews.  “It’s a personnel matter, so I can’t comment on it.”

Durant also declined to specifically confirm that an employee is under investigation, saying she doesn’t have all the facts.

Alexis Dolan, the Senior Administrative Coordinator of LMU’s philosophy department, wrote a strongly-worded letter to the editor of The Loyolan admonishing her “fellow LMU” employee for her “choice” to “bully, intimidate and condemn” students.

The employee’s husband told LifeSiteNews that his wife was allowed to return to work after two weeks of paid suspension and that the university will likely announce the conclusions of its investigation this week.  It took LMU more than a week to interview the employee about her side of the story.

The couple retained Charles LiMandri and Paul Jonna as legal counsel.  They also may pursue canonical action against the university.

Investigations “in process” mean “BIRT is currently collaborating with university offices charged with reviewing, investigating, and resolving a reported incident,” according to LMU’s website.

The employee’s husband told LifeSiteNews that their attorneys filed a complaint about anti-Catholicism with BIRT, which read:

My client…an employee of LMU, has been subjected to Anti-Catholic bigotry by having her religious beliefs as a devout Catholic repeatedly called “hateful”. She has been made an object of ridicule and scorn for compassionately expressing the Magisterial teachings of the Catholic Church to willing LMU students, even though those very same students thanked her and said they appreciated the constructive dialogue. She has nonetheless been repeatedly attacked in the LMU newspaper and falsely accused of ‘hate speech’ and even ‘hate crimes’. This is not only false but defamatory and actionable. This also violates LMU's professed Mission Statement as a Jesuit Catholic University, and contradicts the recent statements of Pope Francis, a Jesuit, that gender ideology is inconsistent with our Catholic faith and destructive to the dignity of the person. There are also signs that have been posted around campus that promote Anti-Catholic beliefs and activities and that create a hostile work environment for devout Catholic faculty and staff, in violation of LMU's nondiscrimination policy and other applicable policies. For practicing her Catholic faith on the LMU campus, [my client] has been placed on administrative leave, without explanation or due process, which has caused her great emotional distress.

This complaint does not appear to be listed on the BIRT section of LMU’s website.

A form on LMU’s website allows users to “report discrimination and bias incidents” if they “feel” they have been discriminated against.

“The university does not tolerate hate crimes or bias-motivated incidents and will respond to them with appropriate sanctions, which may include: for students, expultion, suspension, or exclusion from the campus; for faculty and staff, disciplinary action up to and including termination,” LMU’s website warns.  “Students, faculty, or staff who experience or witness any form of hate crime or [sic] bias-motiavted incident should immediately report it to the Department of Public Safety.”