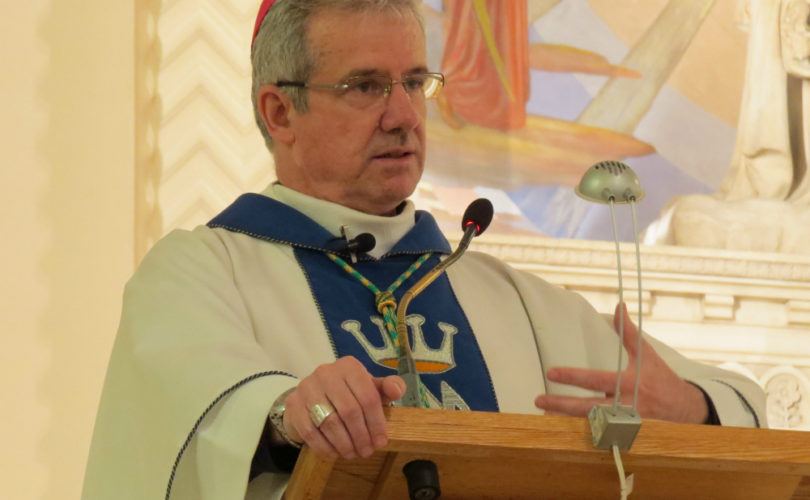 Canadians headed to the ballot box for the fall federal election should remember the right to life is 'the most basic thing in society,' the archbishop tells LifeSiteNews.Pete Baklinski / LifeSiteNews

OTTAWA, May 25, 2015 (LifeSiteNews.com) — Montreal’s archbishop, Christian Lépine, weighed in on what the Catholic Church actually has to offer people struggling with the biological sex they were born with, telling LifeSiteNews in an exclusive interview that it’s no mistake that God creates the human person as male or female and that every person must look for their identity within a “view of God.”

“The teachings of the Church as such, its most basic one, is that we’re made in the image of God. That's always the starting point. And when you lose track of that — that you're made in the image of God — then somehow you come to lose trust in who you are as a human being, and you know less of who you are, and you don't know anymore who you are, and you [find yourself] looking for your own identity outside of a view of God,” Lépine told LifeSiteNews last week one day prior to the annual National March for Life that drew an estimated 25,000 pro-life advocates.

Following the first book of the Bible, where it is stated that God created human beings as “male and female,” the Catholic Church has always taught, and continues to teach, that the male/female binary is God’s plan for mankind.

As the book of Genesis (1:27) states: “God created man in his own image, in the image of God he created him, male and female he created them.”

The Catechism of the Catholic Church stresses that recognizing and preserving the male/female sexual difference is necessary for a healthy society.

“Everyone, man and woman, should acknowledge and accept his sexual identity. Physical, moral, and spiritual difference and complementarity are oriented toward the goods of marriage and the flourishing of family life. The harmony of the couple and of society depends in part on the way in which the complementarity, needs, and mutual support between the sexes are lived out,” the Catechism states.

Lépine said that anytime questions about sexual identity arise for the faithful, “we must go back to the basics,” namely that “every human is created in the image of God, and of course, biblically, every human being exists as a woman or as a man.”

The archbishop’s words are foreign to mainstream notions of so-called ‘gender fluidity’ where male/female difference is construed as a social construct and ultimately as a personal choice.

Lépine acknowledged that some people suffer when it comes to accepting their own sexual identity as either a male or female based on biological characteristics.

He called the male/female binary “a reality that is part of the [human] experience,” adding that it is also “taught in the Bible.”

Lépine stressed that the Church does not leave people “looking for a meaning in their lives and their own sense of identity” to struggle on their own, but offers them many helps and aids, including a clear anthropology on the nature of the human person.

“So, how [are we] to help [such] people? You can talk about things theoretically, which is one thing. But also, we have to be conscious of people who live through situations where they're looking for their own identity and we need, I think, the Bible and faith to help them.”

Fluid notions of gender have been criticized by Pope Francis on at least three occasions, and prior to this, by Pope Benedict XVI.

“Gender theory is an error of the human mind that leads to so much confusion,” Pope Francis told young people during his voyage to Naples, Italy last March.

In his 2012 Christmas greeting, Pope Benedict condemned gender theory as a “profound falsehood” since it denies the male and female sex as a “given element of nature.” According to Benedict, instead of acknowledging that God created people male and female, gender theory posits the existence of sexual social constructions that people can decide to conform to or not.

“The profound falsehood of this theory and of the anthropological revolution contained within it is obvious. People dispute the idea that they have a nature, given by their bodily identity, that serves as a defining element of the human being. They deny their nature and decide that it is not something previously given to them, but that they make it for themselves.”

“When the freedom to be creative becomes the freedom to create oneself, then necessarily the Maker himself is denied and ultimately man too is stripped of his dignity as a creature of God, as the image of God at the core of his being,” Benedict concluded. “The defence of the family is about man himself. And it becomes clear that when God is denied, human dignity also disappears,” he said.

Earlier in the interview, Lépine spoke about the need to “promote relentlessly life and respect for life” in the face of the country’s top court setting the legal stage for allowing doctors to end the lives of their patients under the pretext of compassion and mercy.

“You don't take care of someone when you suppress the life of someone, because you're not solving a problem. You're suppressing the person. It doesn't work,” he said.

Referring to the upcoming federal election this fall, the archbishop called “life and the right-to-life and dignity of the person” an “important subject, because it's the most basic thing in society.”