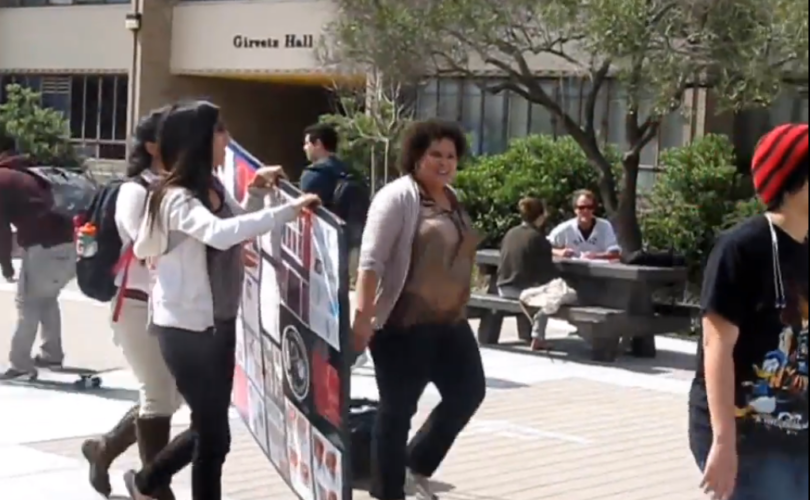 Miller-Young had previously pled no-contest to three charges of grand theft from a person, battery, and vandalism after she stole a sign from Thrin Short and her sister in March. In addition to scratching Thrin, she destroyed the stolen sign. Two students assisted with the theft of the sign.

Although a charge of battery can result in imprisonment according to Calfiornia law, Zonene said Miller-Young's position as a professor and the fact that the pro-abortion activist was pregnant should shield her from a harsh sentence.

During the sentencing, which took place on August 15, Judge Brian Hill reportedly stated that he has “no question” that Miller-Young is “of impeccable character outside of this incident.”

When asked whether he agreed with Hill, Zonen said Miller-Young's lack of a criminal record and status as a professor at UC-Santa Barbara were “considered” as part of Hill's decision.

In addition to Miller-Young's legal history and profession, Zonen said that Miller-Young had suffered enough for her crimes.

“The real punishment to her,” he stated, “is what occurred to her publicly after this happened.” He intimated that the media attention and criticisms Miller-Young received after the commission of her crimes were problematic for her, and that the sentences were devastating to a public figure and college professor.

Zonen said that “nobody goes to jail for misdemeanors” in Santa Barbara county because of overcrowding.

He also cited Miller-Young's being seven months pregnant as reason to not place her in prison.

The District Attorney's office did not press charges against the two students who helped Miller-Young steal the signs. Zonen said this was because Miller-Young was the person who initiated the illegal acts, and the student involvement was not serious enough to warrant charges.

However, Thrin's mother, Catherine — who is the legal director of the Life Legal Defense Foundation, a pro-life legal group based in California — said in a public statement provided to LifeSiteNews that while Miller-Young's record may be clean, her history is not.

“Shortly after the incident [in March], I was contacted by members of another group, Justice for All (JFA),” Short said. “A few years ago they set up a pro-life display at UCSB. Miller-Young approached the display and engaged in the same type of angry, bullying, demeaning diatribe in that situation as she did here.

Justice For All did not reply to queries from LifeSiteNews as of press time.

While Miller-Young received condemnation from media outlets and pro-life leaders, she also received a great deal of support from her fellow educators. One UCSB professor, Paul Spikard, wrote in support of Miller-Young that she is being targeted by “an energetic smear campaign that seems to have little to do with her person or her actions, and a great deal to do with fomenting racial hatred and rallying right-wing political sentiment.”

According to Fox News, another of Miller-Young’s colleagues, Professor Eileen Boris, wrote that “if [Miller-Young] appears smiling on camera, she is 'wearing the mask,' that is, she is hiding her actual state through a strategy of self-presentation that is a cultural legacy of slavery.”

Other letters of support have come from faculty at other universities, including Emory University and the University of Arizona.

According to a court document provided to LifeSiteNews, Catherine Short noted that while Miller-Young offered an apology for some of her actions in March, her “apology says nothing about her pushing, grabbing, and scratching Thrin. Until Miller-Young takes responsibility for everything wrong she did that day, it is less than a complete apology.”

That apology read in part:

I wish to apologize for my actions. … The Survivors of the Abortion Holocaust group had a perfect right to come to UC Santa Barbara to express their views about women’s reproductive rights. As much as the images they displayed were offensive and distressing to my students, and to me, I had no right to take their poster or destroy it.