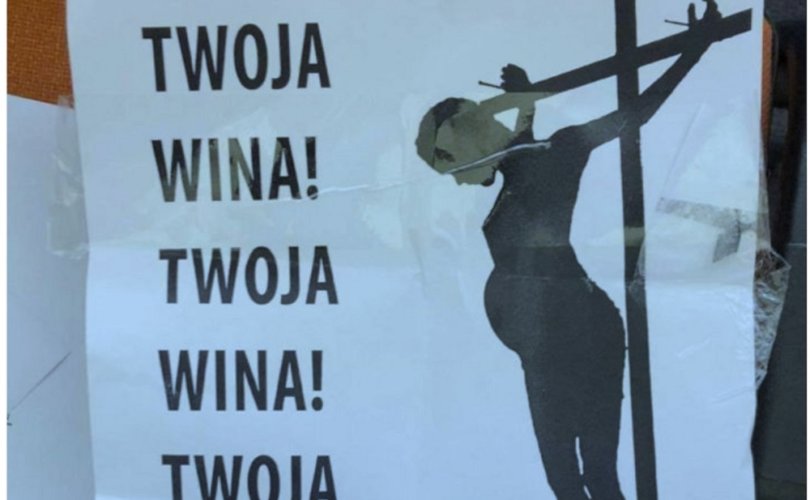 KRAKOW, Poland, October 26, 2020 (LifeSiteNews) — A young man who recruited his friends to protect the churches of his city from pro-abortion activists says Polish Catholics are not ready to let their country go the way of the West.

Kraków resident Kay Łancucki (pron: wan-TSOOT-ski), a married father of one, told LifeSiteNews that the citizens’ defense of churches there was “spontaneous” and “decentralized.”

“It was a spontaneous decentralized initiative, and as it should be in a majority Catholic country,” he stated.

“People are ready to take a stand.”

Łancucki believes that there is a general sense of duty among Polish Catholic youths and that the “call to duty” was sounded when the country’s left wing reacted violently to Thursday’s historic declaration that eugenic abortion violates the Polish Constitution.

“We do not want to repeat the mistakes of the West,” Łancucki declared.  “Polish conservatives will nip the issue in the bud.”

The Kraków defense was a case in point. Łancucki stated that the group of volunteers was formed within less than twelve hours.

“Several organizations came up with the same idea,” he said.

“As many others were, I was texted by a friend, and I called a few more. Before long, we had a large crowd ready to act.”

Their fears for their churches were not unfounded.

“With my own eyes, I saw acts of vandalism and blasphemy,” Łancucki stated.

“People tried to create blasphemous installations consisting of rosaries, their slogans, and hangers. I saw people sticking blasphemous posters with a pregnant woman nailed to the cross, and I saw people trying to spray-paint gates and doors. I know from sources in other cities that some churches had their stained-glass destroyed with rocks, dirty underwear thrown [through church doors], and Masses disrupted.”

Poland’s Catholic Church leadership has called for a reasoned discussion between Poles who support the right to life of unborn children with illnesses, disabilities, and genetic disorders and those who do not. Łancucki does not believe this is always possible.

“It seems that the Church is trying to reason with the mob and moderate the temperament of the crowds,” he told LifeSiteNews.

As yet [bishops have] not called for public defense of Church properties. Instead the Church has asked us to take a step back a try to engage in dialogue,” he continued.

“I believe it is possible to engage in a meaningful conversation with an individual, but never with a mob.”

— Article continues below Petition —
PETITION: Ask Pope Francis to clarify and rectify scandalous remarks on homosexual civil unions
Show Petition Text
22713 have signed the petition.
Let's get to 25000!
Thank you for signing this petition!
Add your signature:
Show Petition Text

And what a mob it was. Łancucki said there were there two groups of protesters on Sunday, the larger being thousands of Poles, misinformed as to what the constitutional ruling will actually outlaw, showing their anger again and hatred for the Church, and the smaller group composed of far-left activists.

According to the young Catholic, the first group rightly sees the Catholic Church as the source of moral order in Poland, whereas the second “consists of radical leftists, anarchists, and communists who know well what is their end goal — the same cliches that they want anywhere else in the world at this moment: to put an end to religion, to demolish the patriarchy, to fight with capitalism, and to sexually liberate all.”

There were many women among the pro-abortion demonstrators, Łancucki said, and the majority of them seemed between 16 and 35 years old. Their disgust for children with Down syndrome was audible.

“They were equating saving the life of an unborn with fascism, Nazism, totalitarianism, and hatred of women,” he said.

“Their language was far from civil:  for hours they repeatedly shouted, ‘You raise your Down’ (referring to kids with Down syndrome); ‘F— off’; ‘F— the Church’; ‘Our body, our choice’; and the like. When we tried to talk with smaller groups, we often spotted individuals under the influence of drugs and alcohol.”

What has happened to Catholic Poland?

Visitors to Poland are used to thinking of the nation of a bastion of Catholicism, a place where saint John Paul II is still, somehow, the pope. However, Łancucki believes that the left’s “long march through the institutions” has come to fruition even there.

“The left has completed its march through institutions, the very same march Rudi Dutschke prescribed as a necessary condition for the revolution,” he told LifeSiteNews.

“One can say that it is a total failure on the part of the Church and Polish education system,” he continued.

“Conservatives neglected the education in Poland while at the very same time the international left has funded countless initiatives since the 1990s to reform and inform the educators. Far too long were we at ease, thinking that the living memory of JPII is all that Poland needed to remain Catholic and conservative.”

But the conservative movements ceded entertainment and pop culture to the left, with fatal results.

“There are hardly any popular TV shows or books even subtly promoting Christian and conservative values,” Łancucki said.

“Modern Christian music is unattractive, and Christian movie productions are often inaccessible to the modern mind, not to mention the art. Polish youths are the very same youths of France, Ireland, and the U.S.: not at all immune to the global trends and secularization. We need to be brave and restore everything in Christ.”

The Church has not risen to the challenge, he believes. Although orthodox “in many regards,” it has not found the new language necessary to connect with the new generation of Poles. Guitar Masses, an over-reliance on the memory of John Paul II, and “infantalized catechesis” has led to indifference and apostasy.

“Over the years, our youths started following and listening to the very same celebrities that corrupt the brains of many in the West,” the young father said.

“Poles are watching the same movies and subscribing to the very same Netflix.”

Meanwhile, the “revolution” now taking place in Poland is the same that became palpable in Western Europe of the 1960s.

“Little by little, we saw a formation of numerous Saul Alinsky–style community organizing associations and groups funded by the international left and the likes of George Soros,”  Łancucki said.

“One notable source of such financial disruption is the [Soros-funded] Stefan Batory Foundation that funnelled tens of millions of zlotys [into Poland] over the course of many years.”

Ultimately, Łancucki is “proud” that he and other Cracovians managed to stop several acts of vandalism and “shown the anarchists that they are not welcome in the house of God unless they came to worship.”

“Further, we have managed to clean every single church, and we took down every single hanger, poster, and pro-abortion sign in the town,” he added.

“I am especially proud of what we have done with the candles scattered around town by the protesters. We disposed of those marked with [obscene] signs and stickers and turned the rest into makeshift prayer altars for the intention of the unborn.”

He added that despite the lack of hierarchical Church support, religious brothers and priests helped to remove the offensive anti-Catholic displays.

“There were no voices of support from around the world for the Polish Constitutional Tribunal, the ruling right wing and Polish Catholics,” Górny stated by email.

Reflecting on earlier coverage, he said, “Nobody said it was a historic event. Nobody said that the Polish pro-life decision goes against all global trends.”

To congratulate the Polish pro-life movement for their historic victory in defense of human life, and to offer material, emotional, and/or spiritual support, please contact: