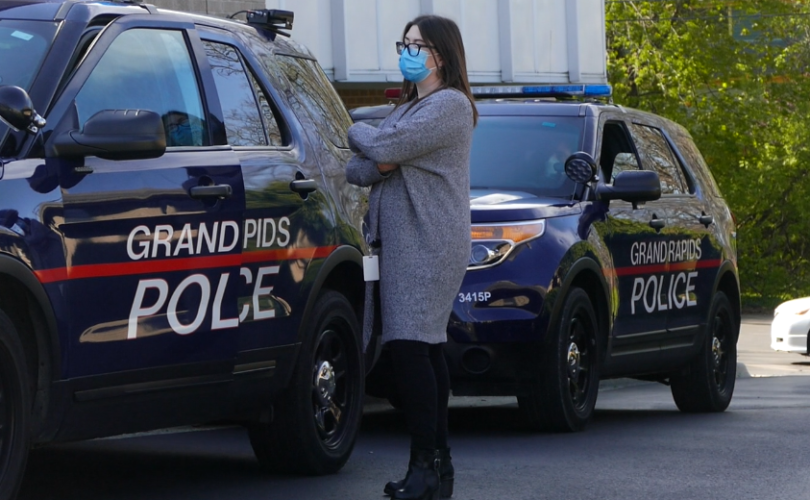 Kelly Benzin-Brinks standing outside Heritage Clinic for Women abortion center where she is the counseling supervisor, May 13, 2020.Stephen Kokx / LifeSiteNews

GRAND RAPIDS, Michigan, May 27, 2020 (LifeSiteNews) — According to a police report obtained by LifeSiteNews, an abortion clinic director in Grand Rapids, Michigan told law enforcement that pro-life activists during a May 13 Red Rose Rescue “entered” the clinic. Two women were subsequently arrested for trespassing. The pro-life rescuers claim, however, that they did not enter the clinic. This LifeSiteNews reporter was also on site, videotaping and photographing the rescue from 8:15am until 12:00pm and can confirm that neither of the two women who were arrested entered the facility.

The police report says that the clinic’s “office manager” informed law enforcement that several of the rescuers “entered the building” and “needed to be told to leave.” That claim, police later told Grand Rapids’ NBC affiliate WOOD-TV 8, is what led them to arrest the protestors for “trespassing.”

More than a dozen pro-life activists standing on the sidewalk outside the clinic can also confirm that the two women who were arrested never entered the facility. At no point does extensive video evidence of the rescue show the arrested women entering the abortion clinic.

The rescue was the fourth to be held in Michigan since September 2017. It was organized by Citizens for a Pro-Life Society, a Michigan-based pro-life group led by veteran activist Dr. Monica Miller. Miller was joined in the rescue effort by Matthew Connolly, Ann Norton, Robert “Doc” Kolavy, Caroline Davis, and Heather Idoni, ranging in ages 21 to 70.

Five trespassing violations were issued but only Davis and Idoni were handcuffed and brought to jail, allegedly, according to the police report, for having entered the clinic.

Miller told LifeSiteNews she entered the facility’s stairwell earlier in the morning. She left on her own accord, however, and was not arrested.

Although the clinic director’s name was redacted in the police report, LifeSite discovered her identity after a simple internet search. Kelly Benzin-Brinks is listed on LinkedIn as being the Counseling Supervisor at Heritage Clinic for Women since October 2019. She previously served as the reproductive counselor at the clinic.

Benzin-Brinks was seen by LifeSite standing and walking in the center’s parking lot during the rescue operation on May 13. She was later interviewed by Melissa Jeltsen, a senior reporter for the left-wing Huffington Post, about the rescue. Jeltsen published her article about the incident on May 21, 2020.

Benzin-Brinks’ account she gave to the Huffington Post differs significantly with what she allegedly told the police as written in the police report obtained by LifeSiteNews.

Kelly, the clinic administrator who asked to be identified only by her first name, called the police. She immediately recognized the protest as a “red rose rescue,” an aggressive tactic where anti-abortion activists physically enter clinic waiting rooms and refuse to leave.

“Our patients were shaken up, scared,” Kelly said. “We haven’t had anything that invasive since the 1980s.” The protesters did not make it inside the facility, she said, but at least one person attempted to enter through the locked security door at the top of a stairwell.

Benzin-Brinks’ admission to the Huffington Post that the protestors did not enter the facility stands in contradiction to what the Grand Rapids Police Department’s report says she told them on May 13. The most significant part of the police report, which is replete with spelling and grammatical errors, reads as follows:

Officers were called back a fourth time, as two people had trespassed into the lot again. This time a staff member, Office Manager __, stated a different female get into the building and had to be told to leave.

__ explained that when the women enter the building they attempt to get into a secured door by saying they are with the patients, or that they need to use the restroom. They are not granted access, and told to leave. The women become aggressive, yelling that they are murderers, and intimidate the patients. They make it as far as the stairwell inside the building, but not into the main portion of the building.

__ advised on this retun trip that the female who had entered the building was now gone.

After officers arrived back to the clinic, a female, identified as Heather Idoni, was standing outside the clinics west side entrance, harassing __ advised that Heather had entered the building. Ofc Fischer placed Heather into handcuffs and advised her that she was under arrest for trespassing.

Miller confirmed with LifeSiteNews that her pro-life partners Idoni and Davis “never entered the clinic, never tried to enter.”

Idoni also confirmed with LifeSiteNews that she did not enter the building.

“When the manager was standing on the other side of the glass (outside door) I did ask about a bathroom. Politely!  She told me to go away and I did, saying nothing else to her,” she added.

Miller told LifeSiteNews that the facility should release any security tapes showing the protestors entering the building and causing a disruption. She issued the following statement to LifeSite:

“The errors and falsehoods in this police report stagger the mind. This Red Rose Rescue took place on the parking lot of the abortion facility– not that there would have been anything wrong at all if we did enter the abortion center to help the mothers and defend the unborn. But we made a decision, due to the Coronavirus situation, to stay outdoors and talk to the mothers in the parking lot.

The report says that Heather Idoni, Caroline Davis and Robert Kolavy entered the abortion facility — when they never did!

The report also states that we shouted — and indeed no shouting at anyone ever occurred!

Indeed, such a thing is contrary to the principles of the Red Rose Rescue.

The report also says that I was escorted out of the building and — again that never happened!  One wonders if this was the same rescue in which we participated.

The clinic director has allegedly spoken falsehoods. One can only venture a guess as to why.

LifeSiteNews reached out to WOOD-TV 8 on multiple occasions last week to inform them that their initial report about the rescue was inaccurate and needed updating. Their original report said that the Grand Rapids police told them that two people “went into the building and yelled at employees and others inside.” LifeSite’s request was not heeded. Miller and Idoni also reached out to WOOD’s newsroom. Only after multiple phone calls did they update their report to include a sentence on how Idoni claimed she did not enter the building.

Miller and her fellow rescuers are scheduled to appear at the 61st District Court in Grand Rapids on July 14th at 8:30 am. LifeSite will continue to follow this story and provide any relevant updates.