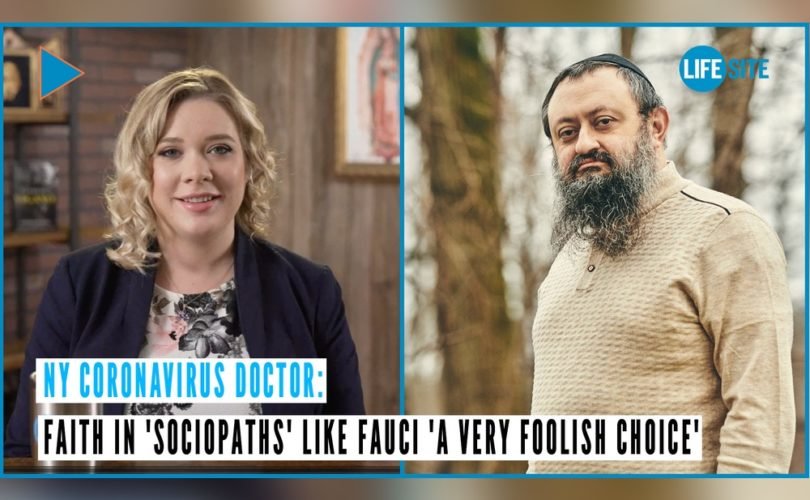 Important Correction: This article originally incorrectly reported that Dr. Zelenko recommended “Corcidin, vitamin C, vitamin D, and zinc’” as a treatment protocol for COVID. The correct first item is actually Quercetin and NOT Corcidin. We apologize for the error that resulted from transcription of the audio that appeared to sound like Corcidin.
Also: In the video interview, Dr. Zelenko mentions that Michael Yeadon has stated that most people vaccinated with the Covid-19 vaccines will die within 2 years after vaccination. It was instead Prof. Dolores Cahill who made that statement, about which Dr. Yeadon has been recorded stating he “would not go that far”.

July 9, 2021 (LifeSiteNews) – Dr. Vladimir Zelenko, the New York doctor who pioneered the use of hydroxychloroquine (HCQ) and zinc as treatment for COVID-19, gave a lengthy interview to LifeSiteNews explaining why this protocol has been so successful. Speaking with LifeSite’s Claire Chretien, Zelenko discussed coronavirus vaccines and the “group of sociopaths” that wants to administer these injections to the entire world, as well as the rampant censorship of information about treating the virus.

Zelenko has been a family physician for two decades in upstate New York. COVID-19 swept through that area at the advent of the coronavirus outbreak in March 2020. Of the more severe cases of the Wuhan coronavirus at that time, most patients were put on respirators, but “80 to 90 percent of people on a respirator were dying, so that wasn’t a very good treatment model,” Zelenko noted.

From 3,000 COVID-positive patients under his care, Zelenko identified 1,000 as “high risk” with whom his HCQ- and zinc-based medical intervention “reduced the death rate from 7.5 percent, to less than half a percent.”

“That is an 84 percent reduction in hospitalization and death.”

Yet this protocol hasn’t been widely adopted by the medical community. Many Americans who caught the coronavirus found their doctors wouldn’t prescribe Hydroxychloroquine, or pharmacists wouldn’t fill prescriptions for it.

“It has been embraced by world-leading physicians who are honest and capable of deductive reasoning and are not indoctrinated,” Zelenko told LifeSite, but “unfortunately, 90 percent of physicians in this country are incapable of independent thought.”

“The net result is that they follow blindly the recommendations of their employers or government agencies without using common sense. They just follow orders, like the Nazis did.”

However, Zelenko drew attention to a number of prominent doctors such as Peter McCullough, M.D., cardiologist and professor of medicine at Texas A&M University Health Sciences Center, and Harvey Risch, M.D., Ph.D., professor of epidemiology at Yale University, both of whom have successfully utilized his HCQ protocol for the treatment of COVID-19. They have testified, including before the U.S. Senate, that “early intervention in the pre-hospital setting is the key to overcoming this health problem.”

“There are dozens of studies that corroborate” his approach to treating the virus, Zelenko added, before adding that his protocol is not the only effective remedy: Ivermectin is one of the more powerful preventative measures against illness from the virus.

Despite government restrictions on the distribution of HCQ, a necessary component of the protocol, Zelenko found an over-the-counter alternative which works in the same way to help zinc penetrate the cells and inhibit viral replication.

“This is the cure for tyranny,” he stated, adding that the principal reasons a patient will die from COVID-19 infection are centered on “the government you live under, and the doctor you choose,” rather than the virus itself.

Explaining, Zelenko said, “if I can tell you ‘Go to the pharmacy and get quercetin, vitamin C, vitamin D, and zinc’ which are all over the counter, and if you use them in the right dosage, you will get better and stay healthy, all of a sudden I have empowered the individual not to be subjugated or brutalized by terrible governance and physician malfeasance and malpractice.”

‘There is no medical necessity for this experimental liquid’

Given the success of his treatment regimen, Zelenko said that “there is no medical necessity for this experimental liquid,” in reference to the mRNA gene therapy vaccines being administered around the world. According to the Centers for Disease Control and Prevention (CDC), people under 18 years of age have a “99.998 percent recovery from COVID with no treatment,” Zelenko noted.

This contrasts with the approximately 7,000 deaths, and many hundreds of thousands of adverse events reported following injection with an mRNA vaccine, the physician said, adding that the risk of harm to children from the vaccines could be as high as 50 to one.

Among the 18- to 45-year-old demographic, Zelenko explained the recovery rate drops marginally to 99.95 percent. Similarly, the safety risks in taking an experimental substance outweigh any potential benefits, of which Zelenko admits the efficacy is “questionable,” even among those in higher risk categories for whom his medical protocol has had demonstrable benefit.

Characterizing the coronavirus crisis as “the biggest psychological warfare in human history,” Zelenko went on to explain that the entire world has been filled “with pathologic fear.”

“That fear is then used to manipulate human behavior,” he said, recalling how some of the most powerful men in the world, like Microsoft founder and billionaire Bill Gates, whom he called “a sociopath,” have used fear to push an agenda “that the world population has to be reduced.”

Regarding the current public health takeover, “in 2020, Gates said that seven billion people will need to be vaccinated,” with a solution that remains dangerous and untested.

Recognizing the gargantuan task of convincing seven billion people to take a vaccine, Zelenko suggested that this end can only be achieved by “generating such pathologic fear, and then offering an artificial solution. You become their saviour.”

“There have always been tyrants and despots who have delusions that they are a deity, or godlike, and feel that they are entitled to set the course of human history.”

The basis of human nature, Zelenko said, can be thought of in two main ways.

— Article continues below Petition —
PETITION: No to mandatory vaccination for the coronavirus
Show Petition Text
1073250 have signed the petition.
Let's get to 1100000!
Thank you for signing this petition!
Add your signature:
Show Petition Text

“If that’s the case, it’s not in the realm of the human being to decide how many people should be in the world and how long we should live.”

In opposition, said Zelenko, is the “Darwinist … eugenics approach which is that the dominance hierarchy of humanity is dependent on superior genetic makeup.”

“The Nazi ideology was exactly that,” he said. The Nazis felt entitled to eradicate “those that they considered subhuman,” including those that didn’t agree with them politically, he added. “The same thing is happening now, except it’s not anti-Semitic.”

According to Zelenko, Gates and the World Economic Forum’s Klaus Schwab, the latter of whom wrote the book The Great Reset, are part of a “group of sociopaths.”

This group believes they have “evolved into a higher being,” a type of “superhuman.”

“They’re pushing this transhumanist agenda,” Zelenko warned, as well as encouraging the eradication of private property and fossil fuels, and trying to vaccinate every person on earth.

“It’s conspiracy – but not theory – and it’s a conspiracy to commit genocide by a group of sociopaths who think that they’re God … This is a war against God.”

“We are living in World War Three … the problem is the weapon that’s being used [fear] is a silent killer,” he said.

The doctor exhorted people, “Don’t give into fear.”

“You are being tested by God. Who are you going to bow down to?”

Zelenko himself has faced persecution for his unwillingness to stay quiet about his research. Regardless of the efficacy of his protocol in saving patients’ lives, he has been banned from Twitter, Facebook, and YouTube, all on account of his successful, counter-narrative approach to COVID-19.

In no uncertain terms, Zelenko described the suppression of his information on life-saving treatment, and the life-saving information provided by others, as part of a “conspiracy to commit murder.”

“I think that all the death that we have suffered as a society and a world has been intentional, wilful, malicious, and due to nefarious governance,” he decried. “This is a crime of historic and biblical scale.”

Zelenko also told LifeSiteNews that early during the coronavirus outbreak, when he began speaking out about using HCQ and zinc to treat the virus, then-President Trump’s chief of staff Mark Meadows called him to talk about Zelenko’s findings. Zelenko said he has treated a number of high-profile patients including former New York City mayor Rudy Giuliani.