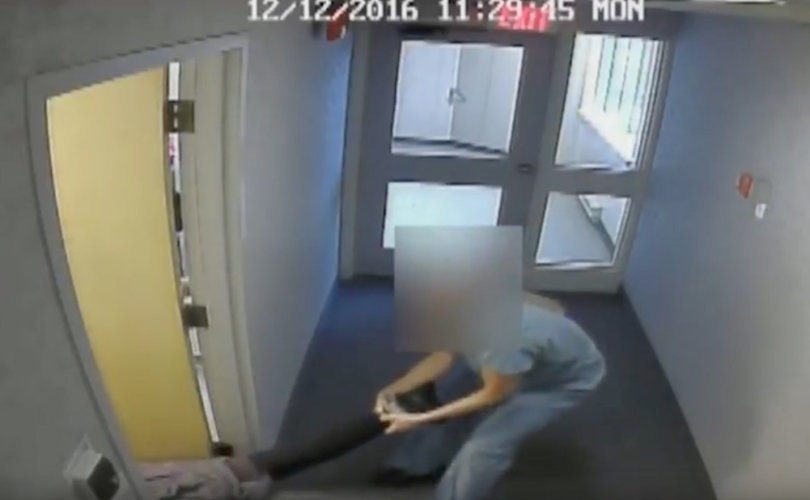 Wagner was arrested December 12 at the Bloor West Village Women’s Clinic while attempting to persuade women to choose life for their unborn children, and charged with breach of probation and mischief.

The abortion facility's video surveillance clip, introduced by the Crown as evidence in her trial, shows the abortion “doctor” pulling Wagner by the legs out of the facility before the police arrive.

LifeSiteNews was not able to publish the clip under an interim ban issued by Justice Ian Nordheimer, pending a full hearing on the Crown’s application for a publication ban.

Superior Court Justice Julie Thorburn released a decision Thursday that “the doctor’s” name could not be published.

RELATED: Judge orders media not to name abortion ‘doctor’ who testified against pro-lifer

“All references to the doctor shall refer only to ‘the doctor’ without any further identification,” Thorburn said.

There is “a real and substantial risk of harm to the witness and a need to protect doctors who perform these legally protected services from that risk,” the judge ruled.

However, neither she nor the Crown objected to the video being released in an edited form.

Horgan described the 15-second video clip to LifeSiteNews as a “metaphor” for what goes on inside the abortion center.

The “doctor” drags Wagner from the abortion facility, as the “doctor” forcibly pulls unborn children from the womb.

And the roses Wagner attempted to give to women in the waiting room being flung out the door after her is a metaphor for the afterbirth of babies killed in utero and discarded.

The abortion facility “usually sees 10 to 20 plus patients a day,” the “doctor” testified June 14.

“At this point I was telling Ms. Wagner that she was trespassing in our clinic, asking her to leave,” the “doctor” said when describing the video to the court.

“I am encouraging her to depart and showing her the path to the door.”

“We just saw you grab her,” noted Crown counsel Craig Power. “Was she resisting?”

“Yes, she was,” replied the abortion “doctor.”

“As we approached the door, Ms Wagner dropped to the floor and grabbed the frame of the adjacent door,” the “doctor” testified.

“At that time she was saying, ‘Stop killing the babies, don’t kill the babies,’ and she was also saying, ‘You’re assaulting me’.”

“When you first saw her, were you angry?” Power asked.

“Yes, I was angry that she had come into our clinic,” the “doctor” replied.

A further video shows an abortion center staff member guarding the door of the abortion facility until the police arrive.

Wagner told the court she was upholding the law by attempting to protect the lives of unborn children.

Libman convicted Wagner of breach of probation and mischief on August 15, and sentenced her September 29 with three years’ probation, and 15 hours community service.

Originally from BC, Wagner, 43, had already served nearly six months in jail awaiting trial.  She has spent four years and eight months in jail for her attempts to protect women and children from the violence of abortion.