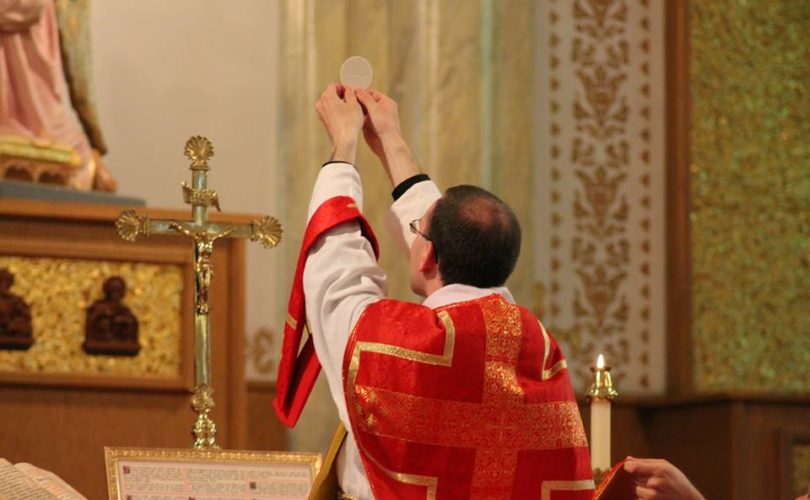 Fr. Kenneth Walker offers Mass at Saint Hedwig Parish in Barry's Bay, ON, in 2012.Our Lady Seat of Wisdom Academy

PHOENIX, AZ – According to a communiqué of the Diocese of Phoenix, 28-year-old Father Kenneth Walker, a priest of the Priestly Fraternity of Saint Peter (FSSP), was killed last night at the rectory of the FSSP’s Mater Misericordiae Mission in what is believed to be a burglary.

Fr. Joseph Terra, 56, the mission’s pastor, was also injured in the attack and remains in critical but stable condition. Father Walker, who had just celebrated his second anniversary of ordination, died in hospital after being shot, according to police.

Born in upstate New York, Father Walker was the middle of 11 children. Prior to entering the FSSP, which is devoted to offering the Tridentine Mass, he took two years of study at one of Canada’s leading pro-life Catholic colleges — Our Lady Seat of Wisdom Academy (OLSWA) in Barry’s Bay, Ontario.

Professors and former students spoke with LifeSiteNews today, remembering with a potent mixture of sorrow and joy their former student and classmate.

They all recalled that from the first he was committed to becoming a priest.  He participated in the college’s pro-life activities, which include the annual Life Chain demonstration.

Jenna Craine, a classmate of the then-19-year-old Walker told LifeSiteNews of how ‘Kenny,’ as he was known, “had a singular love for Christ.”

She recalled that in one writing class that was populated with only women apart from Kenny, the female professor instructed the class to write about ‘your perfect wedding proposal.’ After an initial private protest from Kenny, he was permitted to write a story on his being called to the priesthood.  Craine, who Kenny asked to proofread his essay prior to its submission, recalled, “It made me cry it was so beautiful, it was so sincere and expressive of who he was.”

Frances Platt, another OLSWA classmate, recalled that Kenny spent his mornings praying in the Church and served Mass daily – as Professor John Paul Meenan recalls, “each and every day.”  Craine says that that habit of prayer was so ingrained in Kenny that he would say grace “for cookies” rather than for meals only. He said those prayers with great devotion, clutching the miraculous medal he wore constantly around his neck.

His example of prayer and focus on Christ was made all the stronger by his friendliness, kindness, and thoughtfulness.  Professor Meenan recalls, “He enjoyed to laugh and joke; indeed, his joy and laughter were infectious in the best of ways.  I’m not sure there was a social event or trip that Kenny missed.”  Platt said her former classmate was “a really great and thoughtful friend, and a wonderful example of faithfulness to everyone around him.”

While at the Academy, Kenny played a minor role as a cardinal in the drama Dr. Faustus, and later played lead role in For Whom the Bell Tolls.

Craine told LifeSiteNews that the many girls in his class at OLSWA were delighted to see him in priestly robes during the production as they had all taken a vested interest in seeing him fulfill his desire for the priesthood.

“There were so many girls in his first year class,” she said, “we all saw him as our little brother because we knew of his strong desire for priesthood, even though he was our own age.” “It was so exciting for all of us when he entered (seminary),” she added.

The great love for Kenny at the Academy went both ways, as he wrote in the college year book, “My time at the Academy has proved to be well spent and an important event in my life.  The people here are warm and generous beyond my original expectations, and this kind heartedness was, to me, most expressed through the Catholic spirit of the faculty and students.”

Professor Scott Nicholson told LifeSiteNews that after his first year at the college, Kenny returned the following year. Two of his sisters came the year after that.

Jenna Henry, another classmate, told LifeSiteNews that after the initial shock of hearing of Father Walker’s murder, she thought, “If anyone was to go get martyred it was him — he was ready to go 10 years ago when he was here.”

Henry recalled that Kenny was involved in a near-miss car accident that alarmed several of the passengers who eagerly related the harrowing tale. Kenny’s contribution to the discussion, by Henry’s recollection was, “Yeah, I started saying my act of contrition.”

In a closing reflection on Father Walker, written for OLSWA, Professor Meenan writes, “Father Kenneth, you will be missed, but our consolation, to paraphrase Saint Therese, is that you will do much greater good in heaven.  Requiescat in pace, et ora pro nobis, frater meus.”