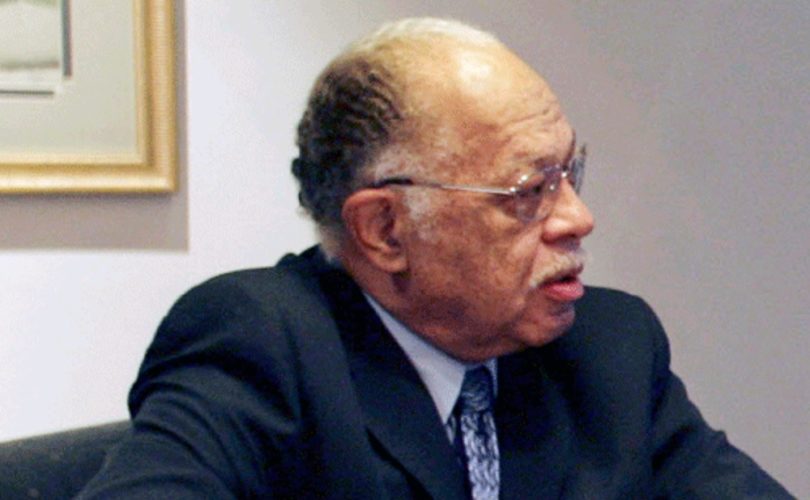 October 3, 2018 (LifeSiteNews) – Gosnell: The Trial of America's Biggest Serial Killer is set for release on October 12, and MJM Entertainment Group has provided LifeSiteNews with an exclusive clip depicting a moment in the trial of Philadelphia late-term abortionist Kermit Gosnell.

The film, which is slated for release in 750 theaters across America next Friday, depicts Gosnell’s arrest, trial, and conviction for the first-degree murder of three born-alive babies and the involuntary manslaughter of patient Karnamaya Mongar. It’s based on a similarly-titled book by the film’s producers, Ann McElhinney and Phelim McAleer, who are also prolific documentarians and investigative journalists.

The dramatic clip features veteran actor Nick Searcy as Defense Attorney Mike Cohen, who is based on Gosnell’s real-life lawyer Jack McMahon. Cohen cross-examines a clinic worker who testified against Gosnell, insinuating that she made a deal with prosecutors to avoid prosecution on drug trafficking charges and that her testimony was tainted by “personal animosity for Dr. Gosnell.”

“This exchange is drawn directly from the court transcript when (…) McMahon questions witness Kareema Cross and undermines her credibility,” MJM Entertainment explained to LifeSiteNews. “He stated in the courtroom that she has a Forest Gump-style ability to be present at all the pivotal moments in the case.”

Cross, the final witness in prosecutors’ case, was particularly dangerous to Gosnell’s defense. She took 10 photos of unsanitary conditions and fetal remains at Gosnell’s clinic, and testified that she witnessed more than 10 babies breathing.

The details of Gosnell’s 2013 trial shocked the nation. According to the 280-page grand jury report, the abortionist killed hundreds of newborns who survived abortion in his blood-stained clinic by cutting their spinal cords with scissors, and preserved their feet in jars. Witnesses described infants who survived initial abortion attempts as “swimming” in toilets “to get out.” Gosnell was ultimately sentenced to life in prison.

The real-life McMahon, who has publicly acknowledged he favors legal abortion, claims his client’s common depiction as “some horrific monster” could not be “further from the truth,” and blasted the film’s version of events as “fiction.”

“We have conducted dozens of hours of interviews with Kermit Gosnell, both in person and on the phone,” Phelim McAleer responded in an email to Metro. “We rely heavily, very heavily on actual court transcripts — the film represents what happened in this investigation and trial (…) Every report and film about everything ends up using composite terms and composite writing — it has to be done to tell a story.”

As a film presenting a critical look at one of Hollywood and the mainstream media’s sacred cows, abortion, Gosnell has faced numerous hurdles on the road to release.

Every major film distributor in Hollywood rejected it, forcing producers to turn to crowdfunding (more than 30,000 people ultimately donated $2.2 million). Judge Jeffrey Minehart, the trial judge in the case, attempted to block both the film and the book with a defamation suit. NPR objected to advertising text that called Gosnell an “abortionist” or “abortion doctor.”

“(M)any people, some of them good friends of mine, declined to work on this film, not because of its quality but because of the fear of reprisal or even ostracism by the groupthink herd in Hollywood,” Searcy wrote last month in National Review. “More than once, I was asked questions like ‘Are you crazy?’ or ‘Are you sure you want to do this?’”