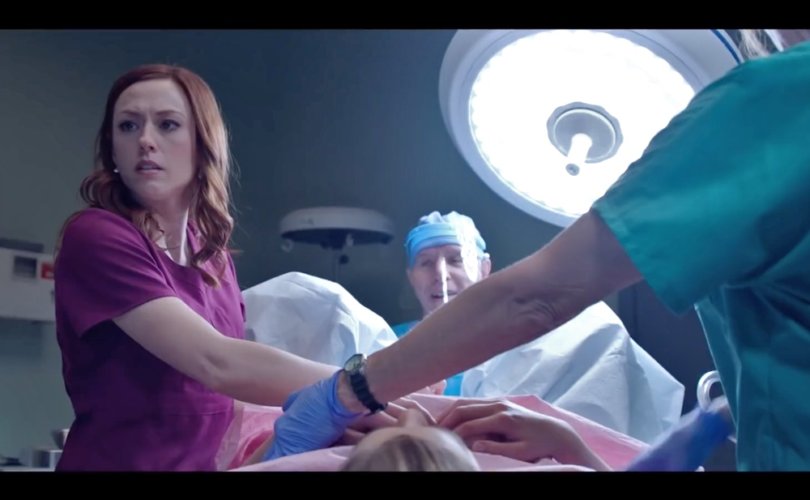 HOLLYWOOD, March 4, 2020 (LifeSiteNews) — Hallmark has reportedly asked a Christian-based movie review organization to reissue its award show that was broadcast on the channel to include the nominations of pro-life movie “Unplanned.”

The move comes after Unplanned’s lead actress Ashley Bratcher set off a social media storm Sunday in which she blasted Hallmark on Facebook and Twitter for “scrubbing” all references to Unplanned in its February 24 broadcast of the annual Movieguide Award show.

But Dr. Ted Baehr, founder and publisher of Movieguide, told LifeSiteNews on Monday that it was his company — not Hallmark — that edited the three-and-a-half-hour gala award ceremony down to the 42-minute show and made the call to edit out Unplanned in the nominee announcements while mentioning other films that were nominated. The show was simply broadcast on Hallmark.

“We made some decisions. We may have made some wrong decisions, but we’ve made decisions,” Baehr said in a telephone interview from California.

Movieguide states on its website that it “reviews movies from a Christian perspective for families and works in Hollywood to redeem the media.” Its annual awards gala, dubbed the “Christian Oscars,” recognizes Christian and family films.

Baehr added on Monday that he “fought to get” Unplanned nominated, but that staff at Movieguide, as well as other judges, were opposed to it.

“I hate abortion, I hate it, that’s why I nominated the movie, and people said ‘don’t nominate it, it’s not that good a movie,’” he said, adding that some people in his organization “hated the movie.”

“The people who did not like it were pregnant women who are pro-life and fight for life, but did not like the violence and the jump cuts and the bifurcated plot. They are women who have fought against abortion for years. One cries when she reads anything about abortion because she loves children,” he said.

Baehr said in that interview that Movieguide’s videographer Jeremy Carroll was responsible for the 42-minute version that Hallmark originally broadcast, and that he trusted his editor.

“I’m not going to go to my editor…and tell him he shouldn’t have cut it,” Baehr said. “I’m sure he cut it for good reasons, and I’m sure he’d make the right decisions and I trust my editors.”

Baehr, however, told LifeSiteNews in a follow-up email Tuesday that “Hallmark asked us to re-edit to include the nominations in the streaming version.” He did not say when this version will be released. In the wake of the controversy, it appears that Hallmark has pulled the broadcast of the show from its streaming app.

He also said he had called Bratcher that morning and apologized.

Baehr sent the following statement to LifeSiteNews late Wednesday afternoon on behalf of Hallmark regarding the re-airing of the show: “We have scheduled the MOVIEGUIDE® Awards to re-air on Hallmark Drama on Monday, March 9th at 10 PM. It will also be available on the TV Everywhere app. All telecasts will include mentions of the film, ‘Unplanned’ and its lead actress, Ashley Bratcher. We at Crown Media [Hallmark] extend our sincere apologies to Ashley.”

Bratcher confirmed in a telephone interview Wednesday with LifeSiteNews that she spoke with Baehr on Tuesday, and accepted his apology.

“I think the world of Movieguide and what they’re doing, I mean, their ministry is very impactful. I respect Ted for calling me and having a private conversation with me,” she said.

“I respect him as a person, any apology he’s made to me I’ve accepted,” added Bratcher. “I respect the whole organization, so I hope that whatever has happened is just corrected, and the right thing is done.”

“I’m sorry if there was confusion but he actually just edited it but all final creative was Hallmark’s. He would never have had any power to do anything with out their direction,” he said.

“The Broadcast was cut and edited by us under direction by Hallmark Channel and their representatives. All final creative approval was done by Hallmark and not Movieguide or it’s editor Jeremy Carroll.”

Unplanned, written and directed by Chuck Kozelman and Carey Solomon, dramatizes the conversion of Abby Johnson from director of a Planned Parenthood abortion facility to a full-time pro-life advocate.

The movie was nominated for a Movieguide award in the category of best film for mature audiences, and for the Faith and Freedom Award. Bratcher was nominated for the Grace Prize for most inspiring performance in a movie for her portrayal of Johnson.

The film depicts Johnson realizing what happens to the unborn child during an abortion when she assists in an ultrasound-guided “procedure” as well as undergoes a traumatic medical abortion during which she endures severe pains and excessive hemorrhaging.

The controversy, which reportedly has resulted in fans deluging Hallmark and Movieguide with protests, began when Bratcher tweeted Sunday that all references to Unplanned’s three nominations had been “scrubbed” from the broadcast.

Outraged. Movieguide awards recently aired on @hallmarkdrama & @UnplannedMovie & I were nominated. We were the ONLY nominees who were not recognized. Hallmark has ERASED us from the show and refused to acknowledge us as nominees. This is completely UNACCEPTABLE.@hallmarkchannel pic.twitter.com/n6KZiXnp1k

“It's one thing to cut the speech, it happens all the time, but the show completely erased us in the nominee announcements. Every other nominee was announced. There's no excuse, even if they say it's time. It takes a millisecond to show our nominee clip.”https://t.co/kj5sTprQ8g

Indeed, in the lead-up to announcing the winner in the three categories, Unplanned is the only one in Movieguide’s list of nominees, announced here, that is not mentioned.

Bratcher told LifeSiteNews she watched the show on three different streaming services “to confirm that I was not crazy, and everywhere that it’s televised, we are completely erased,” she said.

“There is absolutely no justification for announcing every other nominee and not including us,” Bratcher said. “It was like we were never nominated. It’s so deceitful.”