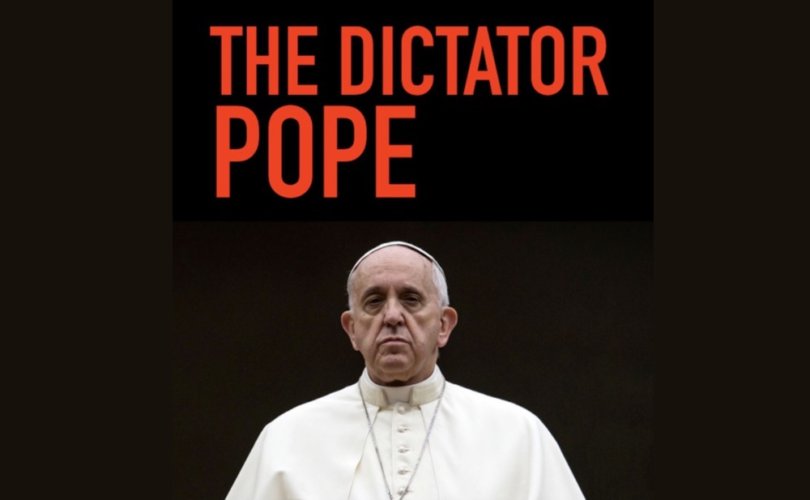 ROME, December 12, 2017 (LifeSiteNews) — “The popular image of Pope Francis is one of the most extraordinary deceptions of the present time,” Marcantonio Colonna, author of The Dictator Pope, has said in a new interview with LifeSiteNews.

The explosive new book, which first appeared in Italian and then in English on December 4, has provoked praise and consternation and drawn considerable attention, particularly in Catholic media.

The author assumes the pseudonym of a real historical figure named Marcantonio Colonna. Born in 1535, Colonna was an Italian aristocrat who served as a Viceroy of Sicily and is best remembered for his service as admiral of the papal fleet in the Battle of Lepanto.

About the author’s true identity, we are only told in the brief biographical note accompanying the book that he is “a graduate of Oxford University and has extensive experience of historical and other research. He has been living in Rome since the beginning of Pope Francis’s pontificate, and his book is the fruit of close contacts with many of those working in the Vatican, including the leading Cardinals and other figures mentioned in the narrative.”

In an email exchange with Marcantonio Colonna, we discussed why he wrote The Dictator Pope, what he hopes the book will achieve, and the most surprising discovery he made in his research.

LifeSite: Why did you write ‘The Dictator Pope’?

Colonna: The popular image of Pope Francis is one of the most extraordinary deceptions of the present time, and contrasts totally with the reality of Bergoglio’s character as it was known in Argentina before his election and is known in the Vatican today. My aim was to let the cat out of the bag and to set out, in a series of studies of policies followed over the past five years, the true nature of Francis’s pontificate.

What do you hope the book will achieve?

I don’t know whether my book could have the effect of encouraging cardinals and other churchmen to tell Francis, “The game’s up.” Perhaps not. But what I principally had in mind was trying to avoid a similar mistake being made again in the next Conclave. My aim was to expose the myth of the supposedly liberal Pope who was elected in 2013 and to urge the cardinals at the next Conclave to avoid electing an unknown figure who turns out to be quite different from what he had been thought.

If your main concern is to see that a similar mistake not be made at the next Conclave, why did you not simply send a report privately to the cardinals. Why go public? Some readers may wonder if the book might do more harm than good, by fostering division and ill will toward Pope Francis among the faithful.

The notion that the College of Cardinals as a whole would read a 60,000-word book sent to them privately is wholly unrealistic. Moreover, the book needs to have the credibility that comes from having been made public and recognized as true by those who know the Vatican. And the cardinals do not make their choice in a vacuum. When they vote in the next Conclave, it needs to be in a context in which the whole Church has recognized the imposture that has been practiced upon it and realizes that we need a Pope who is primarily a man of God and not a politician.

What did you find most interesting, surprising, or shocking in your research?

In fact my book is mainly based on a long series of articles which have already exposed many aspects of Francis's pontificate, but the world's media have preferred to take no notice of them. A personal contribution of mine has been to transmit to the rest of the world the estimate of Bergoglio that had long been held in Argentina. In researching Bergoglio’s past, one of the most significant pieces of evidence I came across was the report written by his religious superior [Father Peter Hans Kolvenbach] in 1991 when it was proposed to make Bergoglio a bishop. The Jesuit General wrote that Bergoglio was not suitable for such an appointment, that he was a man of devious character, lacking psychological balance, and had been a divisive figure as Provincial of the Jesuits in Argentina. The existence of this report has long been known, and I received the account of it from a priest who read the document himself at the time.

What’s your overall view of Pope Francis in light of what you discovered?

My view of Pope Francis is mainly formed from researching his Argentinian background. He emerges as a flawed character, who is capable of impressing people profoundly and forming warm friendships, but who, as one of his priest friends remarked, “manipulates people through the affections.” This characteristic has enabled him to establish a skillful ascendancy over his subordinates in Rome, as he had done previously in Buenos Aires. Bergoglio is also very much the product of the peculiar political culture of Argentina, formed by the populist dictator Juan Perón, of whom Bergoglio was a follower from his early years, and whom he very much resembles in his style of government.

How does this compare with pontificates of the past?

Francis’s pontificate is absolutely unique in modern times, and can only be compared to a few disastrous pontificates of the past, when the cardinals manifestly made a mistake in their selection. This is bound to happen from time to time, but we have to go back a long way for any earlier precedent, and it’s not surprising that people will find it difficult to believe that such a total mistake could have been made.

Even some who have praised the book for its thorough research call it tendentious. How do you defend these claims?

My book can only be called tendentious in the sense that it makes a case; but it makes it on the basis of a vast array of facts, which are fairly presented. By contrast, the current public image of Pope Francis is a PR exercise which bears no relation to reality.

The book is well researched and heavily footnoted, but not where you speak of allegations that the Vatican made financial contributions to Hillary Clinton’s presidential campaign. Why did you include these allegations in the book?

This accusation was made to me unambiguously by a contact in the Vatican, whose identity I have to protect. However, the allegation is quite well known to journalists. With this and other scandals I mention, my desire was to encourage further investigation by researchers who are better qualified than I am to delve into financial matters.

The Vatican is reportedly seeking your true identity. Why did you use a pseudonym? And are you afraid of reprisals?

Sadly, what emerges in the book is Pope Francis’ tendency to vindictiveness. The present-day Curia lives in a state of fear that any criticism of the Pope will lead to dismissal, as it did in the case of three officials of the Congregation for the Doctrine of the Faith who were summarily dismissed by Francis without explanation. Those who wish to tell the truth are therefore compelled to anonymity, to protect not only themselves but those around them.