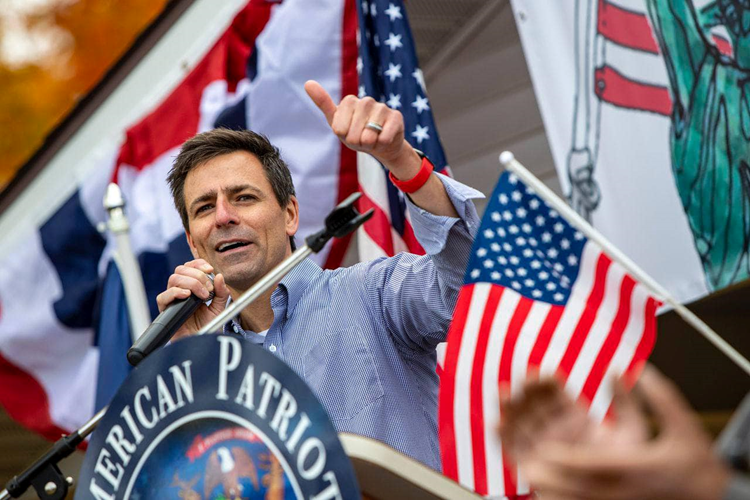 Ryan D. Kelley is a Republican candidate for governor in Michigan.Facebook

(LifeSiteNews) — Michigan GOP gubernatorial frontrunner Ryan Kelley told LifeSiteNews that his campaign is “full speed ahead” after his arrest by the U.S. Federal Bureau of Investigations (FBI) Thursday morning.

“This doesn’t change anything. We’re full speed ahead. The governor’s race is still on. If you didn’t know me before, you know me now. Nothing changes with the race,” Kelley said in a telephone interview.

Kelley, a 40-year-old father of six and devout Catholic, was taken into custody after a team of more than 20 FBI agents raided his personal residence in the small town of Allendale, Michigan Thursday morning while his children were at home. He was served with four misdemeanor charges related to his presence at the U.S. Capitol on January 6, 2021. Kelley, who has been an Allendale Township Trustee and enjoys a successful real estate career, has consistently maintained innocence of any wrongdoing.

Approximately 50 supporters greeted Kelley at the courthouse Thursday when he was set free on his own recognizance around 3 p.m. He made no statements to the media at the time. Further developments with his case are expected in the coming weeks.

Thus far, Kelley has run an effective grassroots-focused campaign. He has been an outspoken critic of COVID mandates and is an ardent supporter of medical freedom. Kelley’s list of competitors decreased several weeks ago when former Detroit Police Chief James Craig and businessman Perry Johnson were told they would not appear on the ballot due to signature discrepancies. Both were considered moderates.

The Republican race for governor is now, in effect, down to Kelley, Kevin Rinke, media personality Tudor Dixon, and chiropractor-turned-politician Garrett Saldano. Dixon is generally seen as the state establishment’s preferred choice, having just won the endorsement of the wealthy DeVos family, of which former U.S. Secretary of Education Betsy DeVos is a member. Saldano, meanwhile, has been grappling with Kelley for grassroots support. Former President Donald Trump is yet to give his endorsement to either of the candidates.

Maija Hahn, founder of United for Healthcare Workers, told LifeSite she believes the timing of Kelley’s arrest is intentional.

“Ryan is a good man. A husband, father, and patriot who loves his country, who sees this country is in danger by a biased media and corrupt government,” Hahn continued. “He’s doing everything he can to defend truth and justice. He is not a terrorist. He was not in the Capitol building that day.”

Kristen Meghan Kelley, who is also active in the medical freedom movement in Michigan, told LifeSite she thinks the arrest was politically motivated as well.

“Ryan is running on a platform that aligns with the constitution and individual liberty,” she said. “He was kidnapped by the federal government. This is a witch hunt. I believe Democratic Governor Gretchen Whitmer sees him as an actual grassroots threat. This arrest was intended to scare him or disparage his name. In reality, he has garnered even more support in this one day.”

Kelley is running on what his campaign calls a “Michigan First Policy” that emphasizes the importance of election integrity, medical freedom, the 2nd Amendment, and the right to life from the moment of conception. A May 27 Target-Insyght/MIRS poll had him ahead of the GOP primary field by a margin of 4 points over the next of three challengers with a recent surge of net sentiments rising by 86%.

Kelley’s arrest comes on the same day that the Democratic-led House of Representatives Select Committee investigating the events of January 6 begins its first of several hearings to present evidence it has collected.

Last year, Revolver News issued a report on U.S. Department of Justice court filings that indicated how FBI operatives may have not only participated in the January 6 riot but had a role in actually organizing it as a means of entrapment. Amplifying and summarizing this report, Tucker Carlson said at the time, “FBI operatives were organizing the attack on the Capitol on January 6, according to government documents.”