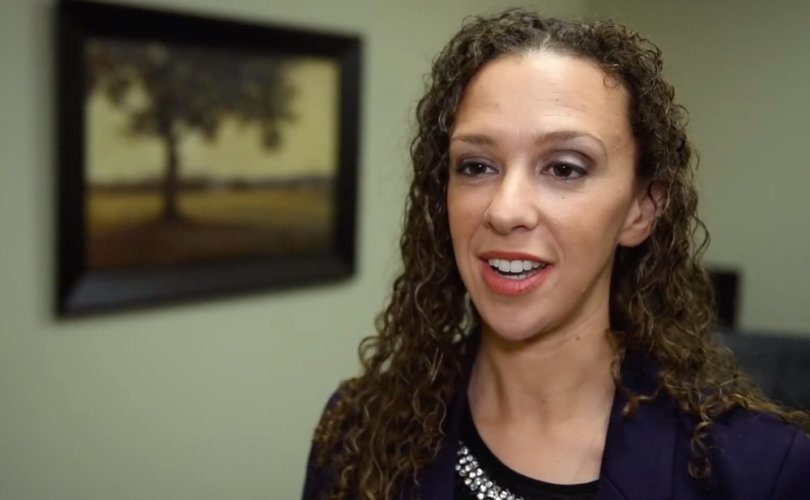 CAMBRIDGE, Ontario, August 5, 2020 (LifeSiteNews) – Last month Belinda Karahalios, a Member of Ontario’s Provincial Parliament (MPP), was kicked out of the Conservative (PC) Party for voting against a Coronavirus-related bill giving extraordinary powers to the Premier of Ontario.

Karahalios, 38, the child of Trinidadian and Portuguese immigrants to Canada, was praised by conservative groups for her stand against Bill 195. The Canadian Justice Centre for Constitutional Freedom (JCCF) called the new act an “unconstitutional power grab.”

LifeSiteNews spoke to the now “independent” MPP last Friday on several topics, including her dismissal from the PC caucus.

“My vote did not make or break that vote,” Karahalios told LifeSiteNews about Bill 195. “This wasn't a campaign promise or the budget bill. So the fact that I was removed from caucus because I was doing what my constituents asked me to do is a little ridiculous.”

Karahalios said Bill 195 was extraordinarily unpopular with the public.

Karahalios said she read the bill thoroughly, checking the Acts it referenced, and asked for additional briefings on the proposal. She said she made her concerns quite clear. Her biggest problem with the bill is that it dispenses with the ability of MPPs to speak on behalf of their constituents by giving decision-making power directly to Premier Doug Ford, his proxy, or any of his cabinet ministers.

“I have a big, big problem with that because it essentially gives him the power to do what he feels is necessary,” Karahalios said.

“And what if that ‘necessary’ is only what the mainstream media is saying it should [be]?” she continued.

Karahalios said that as a parent it made her feel “very uncomfortable” that the government was mandating what her child wears on his face.

The MPP said that the support she received after her vote and her dismissal was “nothing short of overwhelming” and also “humbling” because she had just done what she had to do: vote the way her constituents wanted her to vote.

“Because I got kicked out, it was incredible: the emails, the phone calls,” she said.

There were also social media messages in her favor, but Karahalios was intrigued that many people told her that they don’t use social media because they don’t like being criticized. This leads her to believe that more people support her and other social conservatives more than the media would have the public believe.

Karahalios told LifeSiteNews that she has been interested in politics since her Trinidadian father told her and her brothers growing up that it was important to know what governments on all levels―municipal, provincial, and federal―were up to.

“We live in a democracy, and we want to be part of those decisions, or make our voices heard,” she recalled him saying.

Politics was always a part of the standard conversation in her life, and when Karahalios reached the Canadian legal voting age, she began political volunteering. Once she started working, she donated money and took part in campaigns. She told LifeSiteNews that the values of the Conservative party made sense to her.

“They involve things like, fiscally, not overspending, being wise with the budget, and accountability, and the freedom of speech and religion,” Karahalios said.

“On the social conservative side of things, I do not agree with abortion or euthanasia, for example,” she continued.

“I believe that life is a very precious gift, and we should cherish that.”

“But the problem is that a lot of the parties in Canada are being run in a corrupt, undemocratic manner. And it is typically done to exclude pro-lifers and conservatives at large.”

One trick that particularly infuriates Karahalios is the in-party practice of ballot-box stuffing. This means that one person votes several times and/or that ineligible people are allowed to vote. The MPP told LifeSiteNews that other Canadian political parties do this, but that this is a real problem for the PCs. Tampering with internal party elections is not illegal in Canada.

Karahalios cited a recent election for the president of the PC party as an egregious example of ballot-box stuffing. Karahalios’ husband Jim Karahalios was the runner-up in that contest.

“In that election, there were more ballots than there were attendees at the convention,” Belinda Karahalios said.

“Brian Patterson supposedly won by 56 ballots, but there were many more ballots than people present. A lawsuit about that is before the court.”

The MPP said that this can be demoralizing for socially conservative grassroots members who buy party memberships so they can take part in nominations, supporting like-minded or courageous candidates who will vote the way their constituents want them to.

“When you stop having nominations and candidates are appointed, that's when you see silencing of the pro-life individual, the socially conservative individual, but also all of our grassroots members. Then [the establishment] finally disqualifies candidates or they kick someone like me out of caucus,” Belinda Karahalios said.

She secured a private member's bill called Bill 150, which aims at stopping voter fraud in internal party elections. It would make ballot-box stuffing and lying in elections an offence. Karahalios says that it has cross-party support.

“It's sitting at committee right now,” she said.

“It's a safeguard that we need in this province and in the country to ensure that no one's voices are being silenced when it comes to choosing an individual who could likely be an elected representative at the provincial level.”

The MPP said corrupt internal party elections are very discouraging for people who want to get involved at this level.

“And when people see the candidates that they would like being disqualified, or see signs of corruption, a lot will just throw up their hands and say, ‘What's the point?’” she continued.

“We're very lucky in Ontario that we have Campaign Life Coalition. They do a really great job advocating and supporting MPPs like me who are pushing the establishment on issues like this.”

Karahalios does not believe that being pro-life has hurt her political career, but she was critical of politicians who say that they are pro-life but are unwilling to put their beliefs into action.

“I've seen it on the federal level  where you'll see members of parliament saying, ‘Well, you know, you can't be a dead soldier’ so they don't vote the right way on the issues that they speak so passionately about. They don't actually do the advocacy work,” she said.

Working behind the scenes for pro-lifers, churchgoers

When challenged, Karahalios pointed to her own behind-the-scenes advocacy work on behalf of pro-lifers in the Kitchener, Ontario area. An abortion center in the small city had asked for a “bubble zone” which would make it illegal for anyone to pray or offer help to abortion-minded women.

“It's quite frankly [troubling], if you're interested in the freedom of speech,” the Cambridge MPP told LifeSiteNews.

“So, I had had a conversation with the Attorney General, and I said, ‘You know, as conservatives, we should be encouraging freedom of speech. We should not be blocking people.’ And I asked quite strongly that we do not implement a bubble zone around the Kitchener abortion clinic,” she continued.

“And so we do not have one currently. I really hope that that continues to be true.”

Karahalios also said that she had worked to get Ontario churches reopened after they had been closed because of the coronavirus pandemic.

“And I very quickly brought this up with several ministers saying we have to open them up, even if it is in a restrictive way. We need to allow people to get back into their places of worship and pray. We have to.”

The MPP says that she met with many religious leaders from her community, and they were willing to do “whatever it took” to get their places of worship reopened.

“And so I'm happy to say that we now have churches open in Ontario. I believe that happened a lot faster because I did so much pedal to the metal, so to speak,” she said.

Regarding the sex education curriculum imposed by former premier and lesbian Kathleen Wynne on the province, Karahalios confirmed that Premier Doug Ford broke his campaign promise to repeal it. She declared herself a firm opponent of the curriculum, but said only Campaign Life Coalition had given her support in fighting it. She believes change will come only if others opposed to the Wynne curriculum write to and call their MPPs, the Minister of Education, and their school boards.

“Signing a petition is great, but the thing is, politicians will receive that petition and say, ‘OK, we got it. Look, we'll present it in the legislature, or we'll table it.’ But it doesn't create enough heat. To create heat, it's not enough to sign a petition.”

Karahalios recommended that parents detail in their communications exactly what it is they dislike about the curriculum and also write or call again asking for follow-up.

“I want to encourage parents,” she said.

“We can't depend on the government to deliver that [sex education] message. I think that's a slippery slope. And we've seen how that's gone with Kathleen Wynne.”

The MPP underscored to LifeSiteNews that social conservatives can make a difference by supporting like-minded MPPs with letters, emails and phone calls when they have to make “hard decisions.” Writing and calling MPPs to know where they stand on certain issues, and even requesting meetings to discuss them, can be effective. Volunteering and giving donations during nominations or elections are also helpful.

“Really it's that vocal support [that is necessary] because I believe that we are a majority when it comes to socially conservative values,” Karahalios concluded.