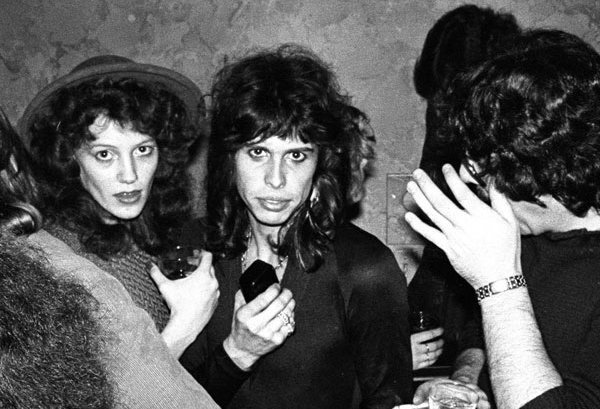 (LifeSiteNews.com) – When Julia Holcomb was sixteen she and a friend contrived to meet Steven Tyler, the frontman of the multi-platinum-selling band Aerosmith, and now co-host of American Idol.

Holcomb’s gambit was more successful than she could have imagined. She and Tyler met backstage after an Aerosmith show, and what followed was a passionate and drug-fuelled three-year relationship that nearly culminated in marriage, even though Holcomb was a full decade younger than the rock star. But the affair eventually spun out of control and ended explosively after Holcomb was pressured into aborting Tyler’s unborn child.

Until now the few known details about the relationship have come from Tyler and his band mates, as found in the band’s memoirs, Walk This Way, or Tyler’s recent autobiography, Does the Noise in my Head Bother You?

For her part, Holcomb has conscientiously maintained a several decades-long silence, leaving many wondering what ever became of her. The last public word about her fate appears to have come from one of Tyler’s subsequent girlfriends, who spoke of “suicidal phone calls” from Holcomb to Tyler while he was on tour. But now she has broken her silence, in a brief 5,000-word memoir published by LifeSiteNews.com in cooperation with Rachel’s Vineyard Ministries, a ministry for post-abortion healing.

Holcomb’s story is at turns astonishing and disturbing – but, for her at least, has a happy ending. Unbelievably, from the young, confused girl who once spent three years living with a rock star, Holcomb has since become a devout and happily-married Catholic mother of seven children – and is fiercely pro-life.

But the journey from the dark years of her late teenagehood to the present is one that she says she nearly didn’t survive.

“I became lost in a rock and roll culture,” she recounts. “In Steven’s world it was sex, drugs, and rock and roll … I didn’t know it then, but I would barely make it out alive.”

Holcomb, who is publishing her memoir under her maiden name to protect her family’s privacy, explains that she chose to tell her story after her relationship with Tyler received renewed attention through Kevin Burke’s recent National Review article discussing her abortion, as well as Tyler’s newly-published autobiography.

“I decided it was time to tell my story honestly, to the best of my memory, hoping to bring closure and peace to this period of my life,” she writes. She says that she is seeking not only to correct what she calls the “gross exaggeration” in Tyler’s accounts of their sexual escapades, but also hopes that her account of her abortion, and the painful aftermath, will help those who have had abortions to find healing and peace.

(Click here to read Julia Holcomb’s complete memoir, The Light of the World)

The topic of abortion comes up more than once in Julia’s story: she herself narrowly escaped being aborted.

Her mother found out she was pregnant with Julia in the midst of a volatile marriage with an unstable and philandering gambler, who abandoned his children when they were toddlers. Family members encouraged her to get a (then-illegal) abortion.

“Thankfully she gave birth to me and later to my younger brother, and was a loving mother,” says Julia.

An alcoholic stepfather followed the gambling father. And then tragedy struck when a car accident killed Julia’s younger brother and grandfather, and injured Julia, her sister, and her grandmother – an event that eventually landed her stepfather for a spell in a mental institution, and precipitated a divorce.

Whereas prior to the divorce Julia’s mother regularly brought her children to church and prayed with them, after the divorce she seemed “wounded and disillusioned with life,” says Julia. She took up with another man, Julia’s second stepfather, with whom she did not initially get along.

Meeting Steve Tyler, and the pregnancy

One of these new friends was a 24-year-old woman who had access to backstage passes for rock concerts. Julia described this friendship as “pivotal” and “one of the most dangerous friendships I ever formed.”

This new friend “quickly taught me to dress in revealing clothes to get noticed and use sex as a hook to try to catch a rock star.” Evidently Julia learned well, for she caught Tyler – hook, line, and sinker.

“I fell hard. And I fell heavy. And I fell so in love.” That’s how Tyler describes what happened after he met Julia, in his autobiography.

So thoroughly was Tyler smitten with his 16-year-old beauty that he began to consider marrying her, and even convinced Julia’s mother to grant him guardianship over her, so that he could take her with him across state lines.

After a few months together, Tyler confided to Julia that he wanted to have a child. “I was touched by his sincerity and said yes,” she writes. “I wanted children, and began to believe he must truly love me since he had made himself my guardian and was asking to have children with me.”

Tyler threw Julia’s birth control pills over the balcony of their hotel room, and within a year she was pregnant.

The fire and the abortion

But things started to fall apart after Tyler announced his intention to marry Julia to his parents. After his parents and grandmother expressed their reservations, due to Julia’s youth, the couple had a fierce argument, and Tyler changed his mind.

Within weeks he was back on the road touring, while she was left back home in his apartment “alone and pregnant … with no money, no education, no prenatal care, no driver’s license and little food.” It was also around this time that Tyler reportedly took up with Playboy model Bebe Buell.

Then came the fire.

One day, says Julia, while on tour Tyler sent an old highschool friend and former bandmate to the apartment to bring Julia shopping. The next thing she says she remembers is waking up in a dense cloud of smoke. The apartment was on fire.

Julia narrowly escaped with her life, in near-miraculous circumstances. After finding all exits impassable, Julia suddenly recalled fire safety advice from a Bill Cosby commercial, and crawled into an unused fireplace over which hung a picture of Jesus inherited from her grandmother.  Tyler later returned that picture to Julia, telling her it was the only thing in the apartment that survived the fire.

Julia was rescued from the burning building by firemen, and landed in the hospital with severe smoke inhalation. Tyler was told that she might not make it. But she pulled through, as did her unborn baby.

That’s when the pressure began.

According to Julia, Tyler came into her hospital room and told her that she needed an abortion “because of the smoke damage to my lungs and the oxygen deprivation I had suffered.” But Julia said no, repeatedly. She wanted the baby. Plus, she was already five months pregnant.

At that point, Tyler relented and told her she could go back to her mother and have the baby. But Julia says she was concerned that her family wouldn’t want her to have the baby either. With no money, and no expectation that Tyler would help provide for her and the baby, she gave in to his wishes.

Julia describes the abortion as “a horrible nightmare I will never forget.” Tyler was with her throughout the abortion, but was doing cocaine the whole time, and therefore seemed “emotionally detached,” she says.

She would learn, however, that Tyler was not as detached as he might have appeared.

In Walk this Way, he remembered the traumatic event: “You go to the doctor and they put the needle in her belly and they squeeze the stuff in and you watch. And it comes out dead. I was pretty devastated. In my mind, I’m going, Jesus, what have I done?” However, Julia writes that Tyler told her after the abortion that, rather than coming out dead, their baby had actually been born alive, and then allowed to die.

“My baby had one defender in life; me, and I caved in to pressure because of fear of rejection and the unknown future,” says Julia. “I wish I could go back and be given that chance again, to say no to the abortion one last time.  I wish with all my heart I could have watched that baby live his life and grow to be a man.”

After the abortion, “nothing was the same” between Julia and Tyler. Eventually she moved back in with her mother, “a broken spirit.” She says she couldn’t sleep without having nightmares of the abortion and the fire.

But she soon came to realize that her second stepfather, whom she had previously disliked, was trying to be a good husband and father, and came to respect him. Julia started going to church with them – a United Methodist church in the area – and began participating in youth events at the church.

She soon went to college, and it was there that she met her future husband, Joseph.

“Today,” she writes, “I am a pro-life Roman Catholic, the mother of seven children, and this year my husband and I will celebrate our 30th wedding anniversary.  Joseph and I have six children of our own, and I give thanks for each of them, as they are truly a gift from God.” The couple are also legal guardians to a young girl, who was born from a difficult pregnancy, but whose mother decided to choose life.

Julia describes her husband as “my true hero.” “He has been a loving husband, a generous father, and hard-working provider for our family. My husband loves me and has forgiven me from his heart and has not let my past define his understanding of who I am as a person.”

Julia and her husband converted to the Roman Catholic faith in 1992.

Julia says that she holds no bitterness for Tyler: “I pray for his sincere conversion of heart and hope he can find God’s grace.”

Mostly, however, she says she just wants people to know that abortion is never the answer.

“Someone may say that my abortion was justified because of my age, the drugs, and the fire,” she says. “I do not believe anything can justify taking my baby’s life. The action is wrong. I pray that our nation will change its laws so that the lives of innocent unborn babies are protected.”

She concludes with these powerful words:  “Our nation’s young girls, especially those like me, who have experienced trauma and abuse, and are vulnerable to exploitation should not be used as sexual playthings, scarred by abortions to free their male partners from financial responsibility, and then like their unborn children, tossed aside as an unwanted object.

“Marriage and the family are the building blocks of all virtuous societies.  I learned this lesson in a trial by fire that taught me to trust God’s plan no matter what occurs.  I pray that our nation may also find its way back to God by respecting the life of unborn children and strengthening the sanctity of marriage.”