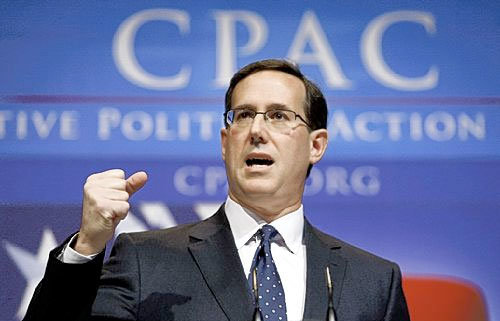 The Duggars "are a wonderful family, and Karen and I support them and encourage folks to stand with the Duggars against these ridiculous attacks from the left,” Santorum told LifeSiteNews.

Former GOP presidential candidate and senator Rick Santorum is the latest conservative figure to urge pro-family advocates to support the #DefendtheDuggar campaign, which was launched by LifeSiteNews in response to an attempt by gay activists to force the Duggars’ popular TV show, “19 Kids and Counting,” from the air.

“Karen and I have gotten to know the Duggar family, particularly Michelle and Jim Bob, personally over the last few years and have been inspired by their amazing family,” Santorum told LifeSiteNews today.

“They have chosen to raise their children in a faith-filled home, encouraging kindness and generosity, to work hard and to have a fun-loving spirit.  They are a wonderful family, and Karen and I support them and encourage folks to stand with the Duggars against these ridiculous attacks from the left.”

Sen. Santorum was referring to an anti-Duggar petition, launched in August, that jumped to nearly 170,000 signatures after it received widespread media coverage last week from news outlets like E! Online, The Huffington Post, the Washington Post, and others.

Meanwhile, tens of thousands of pro-family advocates have rallied to support the Duggars, with over 190,000 having signed a counter-petition launched by LifeSiteNews last Thursday urging TLC to stand by the Duggars against the media attacks.

The Change.org petition specifically criticizes Michelle Duggar, the matriarch of the famous large Christian family, for opposing a “transgender” bill in Fayetteville.

Michelle had recorded a robo-call urging Fayetteville residents to vote against the measure, saying it would “allow men – yes I said men – to use womens and girls restrooms, locker rooms, showers, sleeping areas and other areas that are designated for females only.”

The anti-Duggar petition also criticizes Josh Duggar, one of Michelle's 19 children, for taking a job at the Family Research Council, a large conservative think-tank, which the petition describes as “a hate-filled, anti-gay organization.” The FRC is a prominent supporter of traditional marriage.

Meanwhile, among those supporting the pro-Duggar petition have been the Benham Brothers, whose own reality TV show on HGTV was canceled after gay activists launched a campaign highlighting their traditional Christian views, and social media star and former Fox News contributor Steven Crowder.

The pro-Duggar counter-petition reads: “I 100% support the right of the Duggars to express their traditional family values, which they have always done with love and compassion, and which simply reflect the beliefs of the majority of Americans.”

“I demand that you ignore the ongoing campaign by a minority of liberal extremists to silence the Duggars, and stand with the family against this absurd attack.”

LifeSiteNews contacted TLC for comment about the controversy, but has not yet heard back.