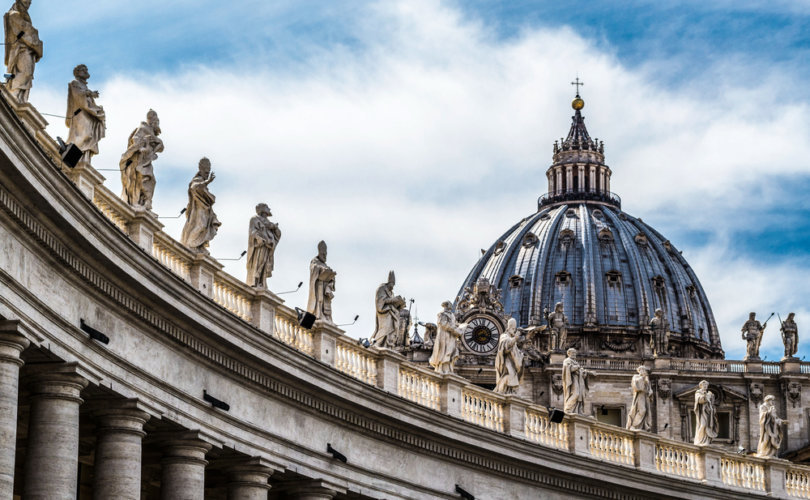 VATICAN CITY, July 19, 2019 (LifeSiteNews) – A Vatican-sponsored meeting for young Catholics in Rome in June featured speakers who called for “deaconesses,” the administration of sacraments by women, “revolution”, “LGBT” inclusion, and “structural change.”

Young Catholics at the event loudly applauded when such calls were made while calls for missionary discipleship were met with little enthusiasm.

The International Youth Forum, consisting of almost 250 young people from around the world, gathered between June 19 and 22  to discuss Pope Francis’ post-conciliar exhortation “Christus Vivit.” The pontiff published the document on April 2, 2019 following the October 2018 Synod of Bishops on Young People, the Faith, and Vocational Discernment. Some of the young people at the June Forum were auditors at the October Synod. The event was organized by the Dicastery for the Laity, Family and Life.

The general theme of the Forum was: “Young people in action in a synodal Church.”

LifeSiteNews spoke to two participants, a young man and a young woman, on the condition of anonymity, not only for their sake, but for the sake of their sponsoring bishops. The first Forum participant told LifeSiteNews of feeling uneasy as a progressive agenda was put forward by numerous speakers while participants cheered.

“The reaction to different open-floor comments and speakers quickly developed a pattern of being loud and supportive of those demanding structural change and diversity, ‘revolution’ or greater support for social issues such as the environment and [then maintaining] an almost deafening silence for those talking about evangelizing our cultures with theology of the body, being missionary disciples united in Christ, or growing in personal holiness,” the young woman told LifeSiteNews.

“During the first panel we heard from a handful of youth synod auditors talking about their experience of the synod process. During this, there was a call that in ten years time it would be ‘normal for women to be deaconesses and administering the sacraments’,” the female source said.

Wimmer also said, according to the source, that she dreamed of a Church in which women do not merely catechize for baptism but  baptize, and do not merely teach marriage preparation but perform marriages and indicated that she was for greater inclusion of “LGBT” people in the Church.

LifeSiteNews has reached out to Wimmer by email for comment, but she did not respond.

John Paul II declared in his 1994 Apostolic Letter Ordinatio Sacerdotalis that “the Church has no authority whatsoever to confer priestly ordination on women.” He added that this “judgment is to be definitively held by all the Church's faithful.”

Meanwhile, such topics as holiness and conversion largely fell by the wayside.

“While important issues such as migration, climate change and youth suicide were frequently mentioned, we seemed to be missing the crucial point – holiness, our evangelistic mission inherent of our baptism, and self-transformation – for only when we are united with Christ, can we heal families, heal our culture and ultimately bring us all back to the one true Catholic Church of God,” the source said.

The young people had been invited to discuss ways in which the ideas of “Christus Vivit” could be implemented in their home diocese to attract more young people to life in Christ. The source said that she sensed that many of her colleagues were not “Christ-centered.”

“As I got to know my fellow delegates and the conference developed, I discovered that few seemed Christ-centered or understood our call to be missionary disciples, let alone a beacon of light for Catholic orthodoxy in an ever-more secular world,” she said.

“Throughout the conference, I therefore developed a growing uneasiness about those entrusted with this responsibility.”

The second source, the young man, echoed the young lady’s unease. He indicated that, sacraments aside, the meeting lacked a solidly Catholic character and that many of the participants were Church employees.

“My overall impressions of the meeting are quite bleak,” he reported by email.

He felt that there was very little emphasis put on doctrine, and noted that the one delegate who spoke well on the importance of understanding and being faithful to the Church’s “established and traditional teachings” did not receive much applause.

“I wouldn't say deafening silence,” he said, “but [there was] definitely a very weak amount of applause for these topics. Compared to some of the other reactions (such as those towards diversity and environmentalism), it would have seemed like a deafening silence.”

He confirmed that the conversation did veer away from traditional Church teachings on such issues as sexuality, gender and ecumenism and that an Austrian delegate said that in ten years time it would be normal for women to be deaconesses and administer the sacraments.

“Yes, this was one of the preselected young people who spoke to us on the morning of the first day of the conference,” he told LifeSiteNews.

“Most of the person's speech revolved around this topic, along with environmentalism.”

Meanwhile, although there was much talk of “synodality”, there were no concrete plans formed for the young people.

“The big ecclesiastical emphasis was on the 'synodal Church', and especially the role of young people in that,” he said.

“Despite this there was very little discussion about what the phrase 'synodal Church' actually means in real terms, and the upcoming Amazon synod was not discussed at all,” he continued.

He added that although the participants were given the impression that in this movement towards a 'synodal Church' young people would have an important role in synods themselves, this was not elaborated on in real-world situations such as the upcoming Amazon synod.

While reluctant to say that his fellow participants were not “Christ-centered,” our second source said that the conversation was much more focused on issues and people than on Christ.

“I didn't hear a lot of talk that seemed Christ-centred, both in the assembly and in the work group,” he said.

“The emphasis seemed very much issue-centred rather than Christ-centred, and the way these issues were approached in general was not theocentric,” he continued.

“One of the lectures that we heard was even titled ‘On the way towards a synodal, people-orientated and missionary pastoral ministry’ which I think highlights this anthropocentric approach that was typical of the discourse at the forum.

Our second source noticed that the gathering, which was grouped according to the official languages, was dominated by Spanish-speakers

“Although less than a quarter of the young people there were from Latin America the noise that they made often made it seem as if they were in the majority,” he said.

“Generally, Spanish-language speakers received a lot more attention and applause when making their points compared to the other language groups, although English and French speakers did also at times receive great applause,” he continued.

The young woman who first spoke to LifeSiteNews thought, however, that the applause was based more on the novelties presented than on ethnicity.

“I half agree that Spanish-speakers received a lot more attention,” she said.

“I still hold that the content had a huge impact. So a Spanish speaker calling for LGBT inclusion or more space for women or some other liberal cause will have received the greatest applause, but a non-Spanish speaker saying those things would receive great applause too.”

Cardinal  Kevin Farrell, who is the Prefect of the Dicastery for the Laity, Family and Life, and Cardinal Lorenzo Baldisseri, Secretary General of the Synod of Bishops, gave speeches welcoming the participants to the event. Both also celebrated Mass for the gathering. Fathers João Chagas; Giacomo Costa, SJ; Alexandre Awi Mello; and Rossano Sala were the clergy among the speakers.