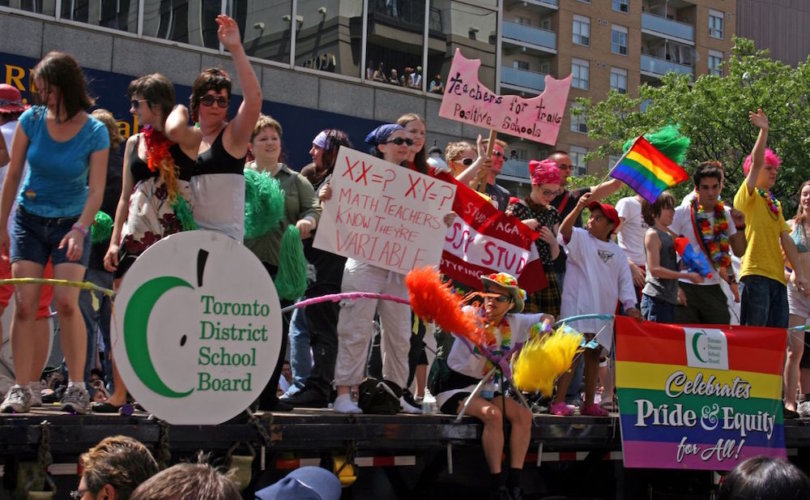 TORONTO, May 30, 2016 (LifeSiteNews) — Ontario teachers are encouraged to tell students that “it’s okay to be gay, it’s okay to be any identity you wish,” and in fact, should be “patted on the back” for “doing your job diligently” under the province’s Education Act, says Ken Jeffers of the Toronto District School Board.

“You do not have to be cautious to talk about these issues,” Jeffers, coordinator of TDSB’s gender-based violence prevention office, told a group of educators at an April conference on implementing the Accepting Schools Act, organized by the Canadian Centre for Gender and Sexual Diversity (CCGSD).

And parents need to know that requests to withdraw students from discussions on “gay and lesbian, bisexual, transgender, same sex-families” because of religious beliefs “cannot be honoured,” Jeffers said, because that “would violate human rights policies and procedures of the board.”

Ontario’s Education Act now incorporates the Accepting Schools Act in its Section 169.1(a), which means all provincial boards are required to “embed diversity education every day in schools,” he told about 60 participants in a workshop on religious accommodation.

“The expectations are that everyone is going to learn about sexual, gender identities and other identities, and that you all have a responsibility to treat each other with respect,” Jeffers said. “And you might learn one thing at home, but what you learn at school will be different.”

Jeffers said that 12,000 students were pulled from TDSB schools this September because of parents’ objections to the Liberal government’s revised sex-ed curriculum.

But for parents seeking to opt their kids out of sex-ed lessons, “blanket requests en masse…don’t really qualify as religious accommodation requests,” according to board policy, he said.

Parents must meet with school school administrators one-on-one to demonstrate how their child is adversely affected by the curriculum, Jeffers explained.

A child under age 16 must have the parents’ permission to make a religious accommodation request, Jeffers noted, but the Child and Family Services Act and the Education Act are clear the child’s safety comes first, and “the child’s rights assert primacy over the parents’ rights or the guardian’s rights,” he said.

“In other words, if the state becomes aware of something that the parents are requesting or wanting that puts a child at risk, regardless of their age, the state has to protect the child’s rights,” Jeffers told the crowd.

“Everybody within the education system has a duty to report any suspicions of abuse or neglect, it’s that notion that the child could be placed in an unsafe situation,” he elaborated.

While “for a curricular accommodation, it would be difficult to prove harm,” Jeffers outlined a theoretical case of a 14-year-old student identifying as transgendered at school, while the parents come in to request that the student opt out of discussions on gender identity, and mention they think participating in those discussions would psychologically harm the child.

Theoretically, “that would be enough of a discussion to trigger a call to CAS to say…the messages the parents are giving to the student isn’t the same as the student’s rights upheld by the Ontario Human Rights Code, and the student could be at risk for further harm,” Jeffers said.

“You’re not going to get many smoking guns like that, though,” he said, adding that the more likely scenario would be parents saying “I don’t want this,” and “the child might not even really fully assert they don’t believe it,” he said.

In that case, the school’s due diligence is “to check in the student as often as you can, make sure they have other…supports,” as psychologists and social workers, “so that when they’re ready to reach out and ask for help, should they need it, it’s available.”

But while the schools are mandated by the Human Rights Act and the Education Act to communicate the message “that it’s okay to be gay and lesbian and trans in our schools,” at the same time, “you’re not supposed to impose those views.”

“So that the student who has a creed belief that thinks, I cannot be gay, I believe that’s a sin in my religion, you don’t want them to feel ashamed for their creed belief, but you want them to acknowledge that within schools it is okay to be gay.”

This is a notion of “cognitive dissonance,” Jeffers said, which holds that “you can believe two separate notions and you can practice them and they don’t interfere with each other.”

Notably, the top court ruled in Chamberlain (2002) that the Surrey school board’s ban of three books on same-sex “marriage” for use in kindergarten and Grade 1 violated the BC School Act’s principles of secularism and non-discrimination. Chief Justice Beverley McLachlin noted while the books might cause five- and six-year-olds some cognitive dissonance, that was “neither avoidable nor noxious.”

The April 29 event was CCGSD’s second annual conference for Ontario educators on how to implement Ontario’s Accepting Schools Act.

The Ottawa-based CCGSD, formerly Jer’s Vision, was founded by homosexual rights activist Jeremy Dias, and its mandate says it “intersectionally promotes diversity in gender identity, gender expression, and romantic and/or sexual orientation in all its forms on a national level through services in the areas of education, health, and advocacy.”

‘Ridiculous’: Toronto schools claim parents have no right to pull kids from gay classes
Lesbian: I use math class to teach young kids about homosexuality so I can ‘hide’ it from parents
Lesbian teacher: How I convince kids to accept gay ‘marriage’, starting at 4 years old
Gay activist: Of course our goal is to ‘indoctrinate children into LGBTQ agenda’
Toronto District School Board backs public nudity at Pride parade
Toronto schools will not ‘condone’ exemptions from pro-homosexual classes: board chair
Toronto school board: Parents can’t opt kids out of pro-homosexual curriculum