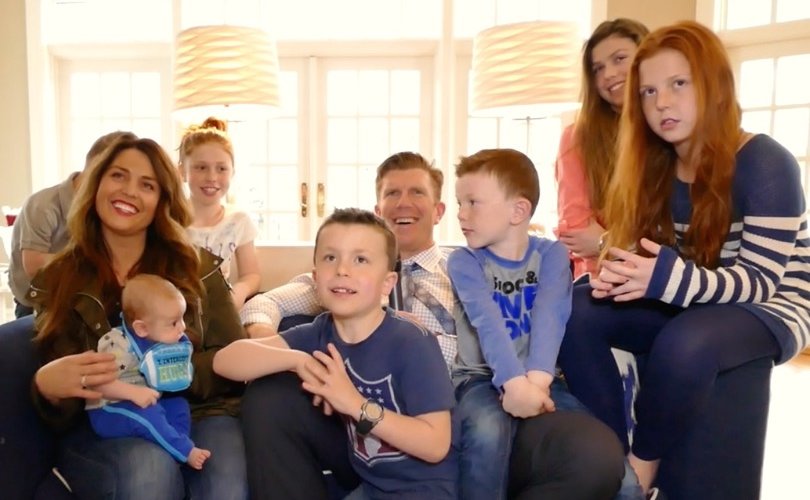 Matt & Adrianna Birk and their 7 children.

April 15, 2016 (LifeSiteNews) — When football star Matt Birk decided to quietly decline an invitation to meet President Obama after winning the 2013 Super Bowl with the Baltimore Ravens, he said at the time that he was acting on his Christian faith and pro-life convictions. The president had recently voiced his support for abortion giant Planned Parenthood, even going as far as to ask God to “bless” the organization. That made Birk upset. He wanted no honors from a man who supported the brutal killing of preborn babies. While all this is true, there was yet a deeper reason which Birk has not revealed until now.

“It was because of my faith and my pro-life conviction, but ultimately, it was because of my kids,” the 15-year NFL veteran and holder of two All-Pro awards as well as six Pro Bowl selections, told LifeSiteNews in an exclusive video interview at his Connecticut home.

“I want to not just talk about my faith, but I want to live it out too. And a few years ago, some of the older ones [were] aware of Planned Parenthood and what occurs there, and so, I wanted to set the example for them and be a dad that they could be proud of,” he said.

For Matt Birk and his wife Adrianna, parenting is not a responsibility they take lightly, especially given their large family of seven children, all under the age of 14. For them, it is their faith in God which inspires them to welcome new life into their family — including recently adopting “little Weston” in January — and to do their very best to raise their children according to God’s standards.

“We love all of our kids. They all have different positive qualities. People will say, ‘Oh, are you done?’ And, honestly, whenever God tells us we are done, we are going to be done. As of now, there is definitely probably another Birk coming. We are always welcoming for another one,” Adrianna said with a big smile.

It is the couple’s deeply held Catholic faith that gives Matt the courage to speak out on controversial issues such as defending the right to life of the preborn as well as defending real marriage and the rights of children to be raised by a mom and dad.

“Our lives and everything we do starts with our faith. We are called first to live it out and [then to] be great examples,” he said.

The Super Bowl champ with the #77 jersey — who was named the Walter Payton Man of the Year in 2012 — said he believes God gave him a platform through football to defend life, marriage, and family values.

“Through football, God gave [me and Adrianna] a platform, and so we try to use it wisely,” he said.

Matt Birk made headlines even before retiring from football in 2013 for taking principled positions on hot button life and family issues.

Most recently, he spoke at the National March for Life in Washington D.C. in January, telling tens of thousands of pro-life supporters: “We march, because I've never heard a woman give birth to a baby and say, 'I wish I had an abortion.' That is why we march.”

In a 2013 interview with The National Catholic Register, Birk encouraged people who want to make a pro-life difference but don’t know how to begin to start with “little efforts.”

“Whether it’s teaching our own children to be pro-life, contacting our elected representatives or working at crisis-pregnancy centers, we can all do something. These examples are in addition to prayer, which everyone can do and which everyone should do. Prayer is the basis of any good action. Each little effort helps to bring about a culture of life, a culture in which children are appreciated rather than disposed of,” he said at that time.

In 2012 while still playing football, Birk strongly supported the movement in Minnesota to protect marriage as the union of one man and one woman. He stated in one pro-marriage video from that time: “Bonding one man and one woman together through marriage helps connect both moms and dads to their kids; that’s why the state cares about marriage in the first place. Society should always be looking for ways to strengthen marriage, rather than redefine it.”

“Our lives and everything we do starts with our faith. We are called first to live it out and [then to] be great examples.”

Birk explained to LifeSiteNews that Christians must defend marriage for the sake of children.

“Marriage is a sacred institution that is ultimately created by God, because he created a man and woman, and the relationship between a man and a woman is the only one that can produce children. We talk about ‘having a family.’ Both the role of a mother and a father are equally and vitally important. And children need, ideally, both a mother and a father. Each child deserves that. We are really not just standing up for the institution of marriage, but also standing up for the rights of children,” he said.

To be “father and mother” to their seven children is a responsibility that Matt and Adrianna take seriously, even though they admit that there are many failures in their efforts. They know that unless God is backing their efforts, failure is inevitable. So, they pray regularly for God to bless their home, their marriage, their parenting, and their children.

“We have a morning devotion that we say on the way to school. We say a prayer in the car,” Adrianna said.

Added Matt: “We try to pray together every night before we fall asleep, exhausted from the day.”

They also pray to some of the saints in heaven to help them through the day.

“We like [Saint] Padre Pio,” said Matt, noting that the family has taken as its motto a saying attributed to the Italian saint.

“‘Pray, hope, and don't worry.’ That's kind of become a motto or a mantra of our family. I think that in today's day and age with so much going on, especially out here in the Northeast — we are not from here — it's crazy. It seems like it's mayhem sometimes. So [we have learned to] ‘Pray hope and don't worry,’ he said.

Matt said that at the end of a hectic day, it is a simple trust in God that allows the couple to keep on going after falling short of the ideal on many counts.

“We try, and we fall short of the ideal every single day. But I think that is a little bit of the point: We couldn't do it without our Catholic faith. And, most days, we feel like we are probably losing lots of battles, but our faith is what carries us through. And, we know that we will go to bed and wake up tomorrow and everything will be okay, just as long as we put it in God’s hands,” he said.