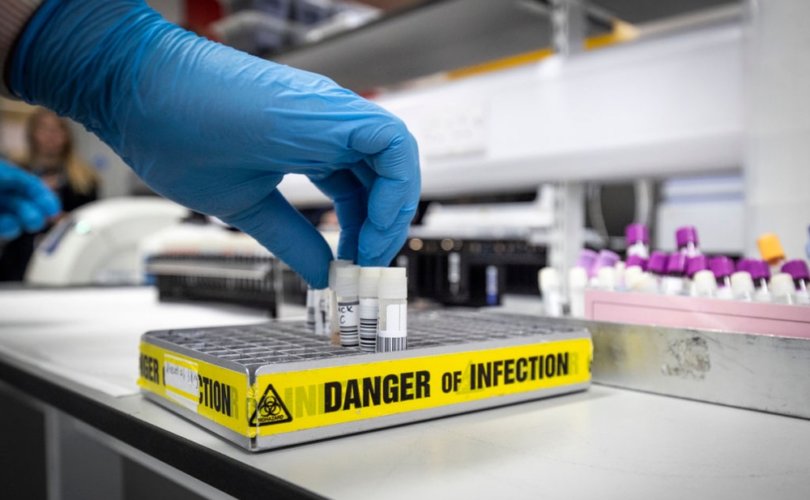 May 16, 2020 (LifeSiteNews) – A team of Australian scientists has produced new evidence that the novel coronavirus that causes COVID-19 is optimized for penetration into human cells rather than animal cells, undermining the theory that the virus randomly evolved in an animal subject before passing into human beings, and suggesting instead that it was developed in a laboratory.

The study, which has not yet been peer reviewed, provides new but not yet conclusive evidence favoring the theory that the novel coronavirus originated not in a food market as has been claimed, but rather in a laboratory, presumably one operated by the Wuhan Institute of Virology in Wuhan, China, the city in which the first outbreak of COVID-19 occurred in December of 2019.

The lead researcher on the team says that the results represent either “a remarkable coincidence or a sign of human intervention” in the creation of the virus.

The authors of the study, led by vaccine researcher Nikolai Petrovsky of Flinders University in Australia, used a version of the novel coronavirus collected in the earliest days of the outbreak and applied computer models to test its capacity to bind to certain cell receptor enzymes, called “ACE2,” that allow the virus to infect human and animal cells to varying degrees of efficacy.

They tested the propensity of the COVID-19 virus’s spike protein, which it uses to enter cells, to bind to the human type of ACE2 as well as to many different animal versions of ACE2, and found that the novel coronavirus most powerfully binds with human ACE2, and with variously lesser degrees of effectiveness with animal versions of the receptor.

According to the study’s authors, this implies that the virus that causes COVID-19 did not come from an animal intermediary, but became specialized for human cell penetration by living previously in human cells, quite possibly in a laboratory.

The authors write that “this finding is particularly surprising as, typically, a virus would be expected to have highest affinity for the receptor in its original host species, e.g. bat, with a lower initial binding affinity for the receptor of any new host, e.g. humans. However, in this case, the affinity of SARS-CoV-2 is higher for humans than for the putative original host species, bats, or for any potential intermediary host species.”

As a consequence, they add, a “possibility which still cannot be excluded is that SARSCoV-2 was created by a recombination event that occurred inadvertently or consciously in a laboratory handling coronaviruses, with the new virus then accidentally released into the local human population.”

In a separate public statement about the research made by Prof. Petrovsky on April 17, the researcher notes that the results of his study are either “a remarkable coincidence or a sign of human intervention,” and adds that it is “entirely plausible that the virus was created in the biosecurity facility in Wuhan by selection on cells expressing human ACE2, a laboratory that was known to be cultivating exotic bat coronaviruses at the time.”

“If so the cultured virus could have escaped the facility either through accidental infection of a staff member who then visited the fish market several blocks away and there infected others, or by inappropriate disposal of waste from the facility that either infected humans outside the facility directly or via a susceptible vector such as a stray cat that then frequented the market and resulted in transmission there to humans,” he added.

The researchers recognize that other possibilities exist, but regard them as improbable. They found that the novel coronavirus has a strong, but lesser binding effect on the ACE2 receptor of Pangolins, which are mammals eaten in China as a delicacy which has often been proposed as the intermediary of the novel coronavirus between bats and humans. However, they note that the Pangolin doesn’t offer a reasonable candidate for an intermediate species for human transmission, because “given the higher affinity of [the novel coronavirus] SARS-CoV-2 for human ACE2 than for bat ACE2, SARS-CoV-2 would have to have circulated in pangolins for a long period of time for this evolution and selection to occur and to date there is no evidence of a SARS-CoV-2 like virus circulating in pangolins.”

A preliminary form of the study, which is currently entitled, “In silico comparison of spike protein-ACE2 binding affinities across species; significance for the possible origin of the SARS-CoV-2 virus,” has been published on a repository site maintained by Cornell University, which warns that studies published prior to peer review should not be considered “established information” unless multiple experts in a given field are first consulted.

According to his university webpage, in addition to his work as a university professor, Professor Petrovsky is currently Director of Endocrinology at Flinders Medical Centre of Flinders University, and Vice President and Secretary-General of the International Immunomics Society. He is also the founder of Vaxine Pty Ltd., which is funded by the U.S. National Institutes of Health and is currently working on a COVID-19 vaccine.

In addition to Professor Petrovsky, the research team that produced the study includes Prof. Sakshi Piplani, also of Flinders University, Puneet Kumar Singh, who works with Petrovsky and Piplani at Vaxine Pty Ltd., and Prof. David A. Winkler, who teaches at the University of Nottingham in the U.K and Monash University in Australia.

The results of the study tend to contradict virologists who have claimed that the novel coronavirus shows no signs of having been produced in a laboratory, some of whom have gone so far as to dismiss such theories as “conspiracy theories.” The “conspiracy theory” claim has been uncritically echoed in much, but not all, of the international media. The staff of the Wuhan Institute of Virology have repeatedly denied the virus came from their lab.

Their position has been supported by a widely-referenced letter from several scientists published in Nature Medicine on March 17, which argues against the likelihood of a laboratory generating the virus in a human cell lab culture.

The argument made by the researchers in the letter is mostly based on the claim that no genetically-close progenitor to the novel coronavirus that could be a candidate for such a process has been described in any scientific study. They also assert that “repeated passage” of coronaviruses in cell cultures have not been mentioned in scientific literature.

However, the letter’s authors do not address the possibility that the Wuhan Institute of Virology researchers simply did not report all of their research to the public, a possibility that seems to have been reinforced in recent months by secrecy and cover-ups regarding COVID-19 research in China, and the repeated refusal of the Chinese government to participate in an international probe of the origins of the novel coronavirus.

Unless an animal version of virus is found, evidence points to “human intervention”

Professor Petrovsky told LifeSite in an email interview that his study indicates that “there are some highly unusual features, including optimal human adaptation, that in the absence of identification of a close to identical virus in an animal population from which COVID19 could have arisen, would point in the direction of human intervention at some point in the evolution of COVID19.”

He noted that, so far, researchers in China and elsewhere have not produced evidence of the presence in animals of a virus closely similar to the one that causes COVID-19 in humans, which would give credence to their theory of natural development in an intermediary between bats, which presumably originated the virus, and humans.

“If an animal vector and virus could be found then of course this would resolve the matter completely,” Petrovksy told LifeSite. “One would have thought that the Chinese would be intensively sampling all conceivable animals trying to find such a virus to exonerate their labs. If no such intense search is going on (which I don’t know one way or the other) then the inference could be that they are not looking because they already know what they might find.”

Richard Ebright, a molecular biologist at Rutgers University who has been critical of laboratory studies that might produce new pathogens dangerous to humans, told LifeSite that Petrovsky’s results “are plausible,” but cautioned that the results of the pre-print of the study “are from computational modelling, not from experiments, and therefore must be considered as provisional at best.”

Ebright noted that an earlier study on ACE2 receptor binding found that a bat coronavirus similar to the COVID-19 virus had strong binding power with the ACE2 of tree shrews and ferrets, making them possible animal intermediary candidates. However, the study did not compare the binding power of the virus’ animal species’ ACE2 receptors with the binding power with humans, as does Petrovsky’s study. Moreover, it did not use a gene sequence from an early version of the novel coronavirus itself, as does Petrovsky’s study, but rather used the gene sequence of a similar bat coronavirus reported by the Wuhan Institute of Virology, called RaTG13.

Ebright told LifeSite that he believes that multiple physical experiments that will ultimately determine if the novel coronavirus is optimized for binding with human cells are “probably underway in multiple locations,” although he did not cite any specific studies.

What is needed, according to Prof. Petrovsky, is a thorough international investigation into the true cause of the COVID-19 outbreak, something the Chinese government has repeatedly refused.

“Whilst the facts cannot be known at this time, the nature of this event and its proximity to a high-risk biosecurity facility at the epicentre of the outbreak demands a full and independent international enquiry to ascertain whether a virus of this kind of COVID-19 was being cultured in the facility and might have been accidentally released,” wrote Petrovsky on April 17.