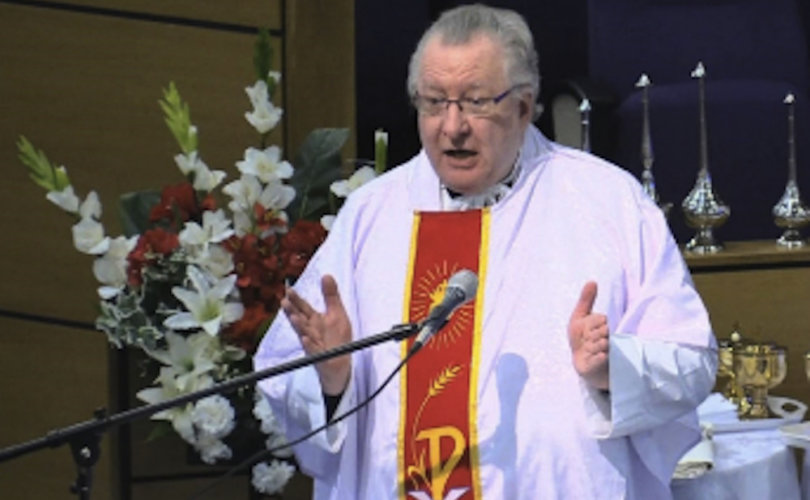 DUBLIN, Ireland, January 26, 2018 (LifeSiteNews) — A renowned Irish exorcist called upon his country’s bishops to provide more backup in dealing with an “exponential” surge of evil.

Father Pat Collins wrote an open letter to Church hierarchy in which he also reported seeing a parallel between the increase in evil activity with a growing apostasy within the Church.

“As this has happened,” he wrote, “there has been increasing evidence of the malicious activity of the evil one.”

The Irish priest reported being flooded almost daily with desperate people asking for his help in handling what they believe to be demonic possession and other evil activity.

Father Collins said he was “baffled” the Irish bishops aren’t doing more to designate priests to address the various inquiries, The Irish Catholic reported, which include people declaring supernatural encounters, being pulled from their beds and also out-and-out possession.

Father Collins noted that Pope Francis gave formal recognition to the International Association of Exorcists (IAE) in 2014, which is a group of some 300 exorcists from 30 different countries.

The IAE has reported a significant increase in demonic activity in recent few years, according to a report from Catholic News Agency (CNA).

The National Catholic Register reported last March on an alarming increase in reports of demonic activity — with the number of exorcists outpaced by demand.

Father Vincent Lampert, an exorcist for the Archdiocese of Indianapolis since 2005, told the Register that actual demonic possessions are rare.

“I’ve only seen three possessions in the last three years,” he said, “but there is also infestation, vexation and obsession.”

Demonic infestation happens in places where objects might move and there are loud noises, Father Lampert explained. In cases of vexation, a person is physically attacked and may sustain marks, including bruises, bites or scratches. Demonic obsession entails mental attacks, such as persistent thoughts of evil running through a person’s mind.

“In possessions,” Father Lampert said, “I have seen eyes rolled back in the head, throwing out obscenities, bodily contortions, foul odors, temperatures drop in the room, and I’ve witnessed someone levitating.”

The Catholic Church draws clear distinction between demonic activity and psychological issues, stating in its Catechism, “it is important to ascertain that one is dealing with the presence of the Evil One, and not an illness” (CCC 1673).

The rules of the Catholic rite of exorcism were recently updated to also state that an individual who believes they are possessed must rule out mental issues first before seeking an exorcism, the CAN report said. Having done that, if exorcism is still needed, they may pursue an inquiry with their diocese’s trained and appointed exorcist.

A spokesperson for the Irish bishops’ conference confirmed for The Irish Catholic that the Church does require each diocese to have a trained exorcist who knows how to differentiate between demonic possession and mental or physical illness.

The spokesperson also said, however that, “Exorcisms are very rare and this office has not been made aware of any cases of ‘exorcism’ in Ireland in recent years.”

Father Collins said it was possible that that he’s sought out by so many people seeking help because he’s well known as an exorcist. But he said there has definitely been a dramatic increase in people experiencing manifestations of evil.

“I can’t judge from my own subjective experience because people see on the Internet that I’m supposed to be an exorcist,” he said, “so I get an inordinate number of calls from people, and emails. All I can say is I have that reputation, but it’s only in recent years that the demand has risen exponentially.”

“What I’m finding out desperately is people who in their own minds believe — rightly or wrongly – that they’re afflicted by an evil spirit,” said Father Collins, also a trained psychologist.

Even in cases where demonic possession is not present, he added, people who come to the Church for help are frequently not getting it.

“I think in many cases they wrongly think it,” he said regarding demonic activity, “but when they turn to the Church, the Church doesn’t know what to do with them and they refer them on either to a psychologist or to somebody that they’ve heard of that is interested in this form of ministry, and they do fall between the cracks and often are not helped.”

It often takes several meetings with a trained priest to discern what the individual is experiencing and that it does not involve a demonic spirit and instead either a medical, psychiatric or psychological problem, he said.

Father Collins told The Irish Catholic it’s clear in the Bible that exorcism is fundamental to the ministry of Jesus, and that he wondered whether clergy in Church today still believe that there are evil spirits, stating, “I suspect they don’t.”

He said that for Church leadership to think there’s no demand for priests who are familiar with the ritual of exorcism is to be “out of touch with reality.”

Father Collins was also critical of the lack of training for exorcists in the Church in a documentary on evil that aired last November, saying at the time it “deeply” bothers him.

The priest said the Church was right for admitting its sinfulness in not defending children during the sex abuse scandal and for the measures put in place since. “But it appalls me that we have no safeguarding from the evil spirits.”

“I say that in the sense that we don’t train anybody to deal with these cases,” he said. “Priests – it’s not that they don’t care – but they don’t know enough about it.”

Father Collins said it was the responsibility of the Irish bishops to implement this training, Dublin Live reported.

“The buck has to land on the bishop’s desk. Who have you trained in your diocese?” he said. “I would say to bishops, ‘Woe to you that neglect the spiritual care of the people.’”