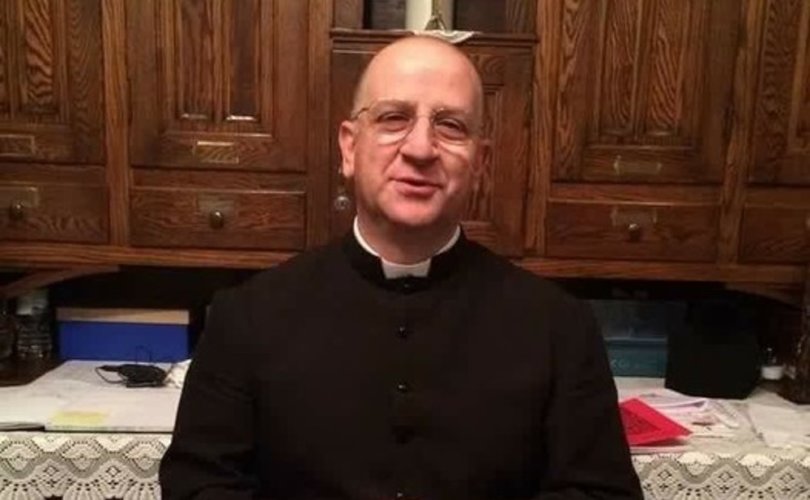 COLORADO, May 9, 2019 (LifeSiteNews) ― Catholics have responded with horror to the news that nine allegedly consecrated hosts were offered for sale on the Etsy e-commerce website this week. Today a well-known American priest revealed that such outrages are common.

Fr. Chad Ripperger, an expert in spiritual warfare and exorcism, told LifeSiteNews that the theft and sale of the Blessed Sacrament is a form of simony–the sin of buying or selling sacred things–that is common today.

“Exorcists are often aware of the fact that the Eucharist is regularly stolen from churches, that some priests are actually involved in Satanism and provide the Hosts, etc,” Ripperger said by email.

“The fact that they are being sold online is a form of simony which is extraordinarily common today as many people are selling sacred and religious items on the Internet on eBay and the like,” he continued.

“This is happening even among non-Satanists and even Catholics who consider themselves in good standing even though they’re selling certain items which the church has always said is sacrilegious.”

The exorcist added that as Satanism is allowed to flourish, Catholics have to be prepared for the fact that these sacrileges are going to happen more often. There are five different ways in which Satanists obtain the Blessed Sacrament.

“Many of them are simply due to the fact that people who are responsible for the sacred mysteries are derelict in their protection of the Eucharist,” Ripperger said.

Although naturally horrified by the the grave offense to God, Catholics will be comforted by the knowledge that Christ cannot be hurt by the profanation of the Eucharist.

“According to the theologians, Doctors of the Church and saints, in the Eucharist we only act upon the accidents of the Bread and not on the Body, Blood, Soul and Divinity of our Lord,” Ripperger explained.

“Therefore, He does not suffer when something physically happens to the accidents of the Bread,” the priest continued.

“Obviously He is offended because the accidents of the Bread … are coterminous with His Body, Blood, Soul and Divinity.”

Ripperger believes that the way to stop the sale of the of the Eucharist is to “cut off the supply.” This can be done by changing certain practises in the Church that make consecrated Hosts easy to obtain and by educating Catholics “on the necessity of our obligation to protect the Eucharist as well as fighting the advancement of Satanism within our culture,” he said.

The nine wafers offered for sale on Etsy as “Real Catholic Hosts, consecrated by a priest” in Germany were sold yesterday for $11.58. The vendor told LifeSiteNews’ original source that he had obtained the items from a church and that he couldn’t “risk anyone exposing [his] priest.” The vendor, who identified himself only with the initials AL and the name of his business, Pentagora, told LifeSiteNews that there are “a handful of priests in Germany who work in the Satanic underground.”

In 2005, online retailer eBay cancelled the listing of a consecrated Host after Catholics protested.

LifeSiteNews attempted to reach out to Etsy again, in particular to find out how readers can ask Etsy not to sell sacred objects. A representative for Etsy hung up the phone.

To ask Etsy to ban the sale of consecrated Hosts and other sacred items, like relics, please contact: