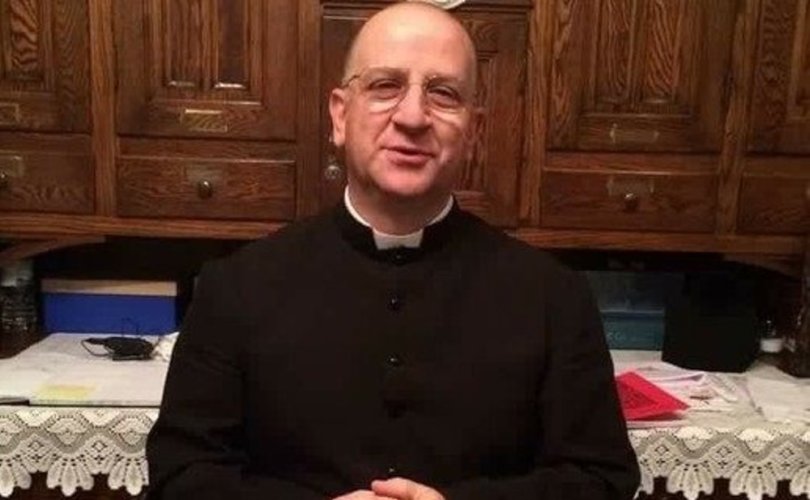 (LifeSiteNews) – A famous American exorcist said Satan told him during an exorcism session that God “is about to take my power away.”

During a podcast last week, Fr. Chad Ripperger said he “commanded” the spirit to explain the motives behind his behavior. Ripperger said the devil — which he identified as Beelzebub — began to weep, admitting that God is set to pull the plug on his influence on Church affairs.

The priest said he could not give intimate details about the reasons surrounding the possession because he did not have his “bishop’s permission to speak” on the inner workings of the case. He said the context for the demonic attack were “certain issues within the Church.”

Ripperger believes that the diabolical admission of God restricting the level of influence that the fallen angels have over Church affairs will have applications on a broader “geopolitical situation by application.”

The influence of the diabolical on the political sphere was discussed on the U.S. Grace Force podcast, hosted by Doug Barry and Fr. Richard Heilman. The trio discussed the crisis in the Catholic Church — which Ripperger called “this darkness that we are experiencing” — and the presence of Marxist philosophy in governance the world over.

The exorcist contended that communism has spread to the whole world, which he believes is evidenced by the fact that “the deep state worldwide was able to shut down the worldwide economy in less than two weeks.”

The advent of global lockdowns at the beginning of the declared pandemic was proof to Ripperger that a Marxist influence has led to a “controlling of the narrative” that arbitrated the messaging surrounding COVID-19.

Outside of his expertise in spiritual and religious matters, Ripperger has published extensively in the realm of human psychology. He said in the interview that his work with possessed people led him to investigate psychology as a way of helping those who came to him more effectively. As a result, he released a series of lectures “on how diabolical psychology and communist psychology are basically … the same.”

It “dawned” on him recently, Ripperger said, that the “structure” of how current governments and demons deal with people is not unlike an “abusive relationship.” He referred to psychology manuals “where they talk about the structure of domestic abuse cases,” arguing that “gaslighting” is a component of abusive behavior.

Gaslighting is defined as manipulating someone by psychological means into questioning their own sanity. According to Ripperger, demons and governments do this — like an abusive spouse — by making claims to the abused that are not true and then denouncing the person for not believing the lie with abusive behavior.

Ripperger believes that an example of this gaslighting is that the term “white supremacist” is used as a pejorative to describe a person who has no history of exhibiting racist behavior. The person is then “gaslit” when they are required to defend themselves against unproven accusations of being racist.

The exorcist opined that the behavior of governments is evidence of “panic” as “they’re just doing whatever they can … as quickly as they can without thinking.” He related the panic he saw in government affairs to the panic he saw in the demon he was exorcising. Ripperger believes that in the government and the Church, officials presently “tend to overextend themselves” because “they are getting hasty … they realize their time is getting short and so they’ve got to ‘do something.’”

“This panic that we’re seeing … they’re literally scrambling [in] the geopolitical situation … and even to some degree within the Church,” he added.

“The demons know that their time is limited, so they’re trying to clamp down on anything … so we’re going to start seeing the governments getting more and more tyrannical … this is an indication that they’re overplaying their hand … because they’re bluffing so much … they’re lying because of the fact that their time is very short.”

Ripperger did not suggest that society and the Church would experience immediate peace or order even with the dissipation of any spiritual tyranny. He said that “evil doesn’t go away quietly, it stomps like a baby … you know [a] violent child.”

Asked how laymen could prepare themselves “to really hunker down and engage in this battle,” Ripperger replied that Catholics ought to keep themselves “under Our Lady’s mantle, having a strong devotion to her, asking her protection.”