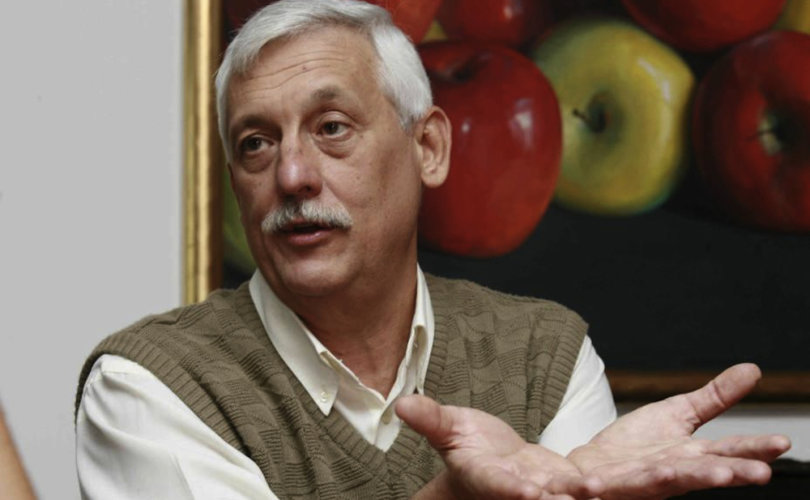 August 30, 2019 (LifeSiteNews) – Satan is a real and a personal being, an international group of Catholic exorcists said, and this is a part of Christian doctrine.

The International Association of Exorcists responded to recent comments by Father Arturo Sosa, SJ, that the devil only exists as a symbolic reality, calling Sosa’s remarks “grave and confusing.”

“The real existence of the devil, as a personal subject who thinks and acts and has made the choice of rebellion against God, is a truth of faith that has always been part of Christian doctrine,” the exorcists said.

Sosa, superior general of the Jesuits, had suggested in an interview last week that the devil was just a “symbolic reality” of the conflict in the human conscience between good and evil.

The devil “exists as the evil personified in different structures but not in people, because it is not a person, it is a way of implementing the bad,” Sosa said. “He is not a person like a human person. It is a way of evil to be present in human life.”

“Good and evil are in a permanent struggle in human consciousness, and we have ways to indicate them,” he said. “We recognize God as good, entirely good. Symbols are part of reality, and the devil exists as a symbolic reality, not as a personal reality.”

The exorcist organization said it released its August 22 press statement to give “doctrinal clarification.” The Catholic Herald picked up coverage of the statement.

Referencing the longtime body of Catholic teaching on the devil, including Pope Francis and his recent predecessors, the International Association of Exorcists said that Catholics are compelled to believe that Satan is a real and personal being, a fallen angel.

“The Church, founded on Sacred Scripture and on Apostolic Tradition officially teaches that the devil is a creature and a personal being, and she cautions those who, like Father Sosa, consider him only a symbol,” the group said.

The exorcists said the Jesuit superior general’s remarks were “outside the ordinary and extraordinary-solemn magisterium.”

In making the comments Sosa is rejecting an article of faith, which is an element in the canonical crime of heresy, noted canon lawyer Ed Peters said.

Peters said Sosa’s statements warrant an official response and pointed out in his blog that this would mean from either the bishop of the Diocese of Rimini, where Sosa made the remarks, or Pope Francis as bishop of Rome.

Sosa, 70, has been the head of the Society of Jesus since 2016. He is from Venezuela and was a Jesuit provincial superior there from 1996 to 2004 before taking on an administrative role for the Jesuits in Rome in 2014.

Sosa’s controversial comments on the existence of the devil were not his first problematic statements on Satan’s existence.

In a May 2017 interview with the Spanish paper El Mundo, Sosa also said the devil is a “symbolic figure” that doesn’t really exist.

“We have formed symbolic figures such as the Devil to express evil,” he said at the time.

After the controversy created by the 2017 remarks, a spokesman for Sosa said his comments must be read in context and that Sosa “does not hold a set of beliefs separate from what is contained in the doctrine of the Catholic Church.”

The Church teaches that Satan is a fallen angel who rejected God by free will.

“Behind the disobedient choice of our first parents lurks a seductive voice, opposed to God, which makes them fall into death out of envy,” the Catechism says. “Scripture and the Church's Tradition see in this being a fallen angel, called ‘Satan’ or the ‘devil.’ The Church teaches that Satan was at first a good angel, made by God: ‘The devil and the other demons were indeed created naturally good by God, but they became evil by their own doing.’”

Satan is “powerful from the fact that he is pure spirit,” the Catechism states, “but still a creature.”

The International Association of Exorcists is an “association of the faithful” officially approved by decree of the Vatican’s Congregation for Clergy in 2014. It consists of some 300 exorcists from 30 different countries. One of its founders was Fr. Gabriele Amorth, who died in 2016, and was known as the chief exorcist of Rome. The group has reported in recent years that there has been a significant increase in demonic activity.