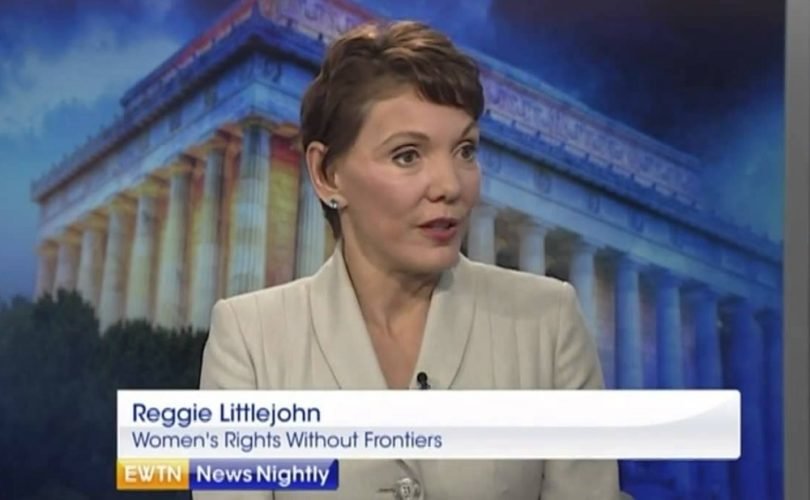 IRONDALE, Alabama, November 25, 2015 (LifeSiteNews) – An expert on China says the country's move from the infamous “one-child per family” policy of forced abortion and sterilization to a “two-child” policy will leave the status quo largely intact.

Human rights activist Reggie Littlejohn, an expert on China and the president of Women's Rights Without Frontiers, spoke with Raymond Arroyo of Eternal Word Television Network's The World Over show about China's new policy of allowing families two children.

Littlejohn said that the change from a one-child to a two-child policy is motivated not by human rights, but by demographics. “It is not that the Chinese communist party has suddenly grown a conscience…at all. It is that they are facing a threefold demographic disaster.”

First of all, Ms. Littlejohn said, China “doesn't have enough women, because of their gendercide.”

“The core of the policy is not that they allow one child or two children, but is that they are setting a limit, and enforcing it through forced sterilization, forced contraception, and a whole web of surveillance of women, monitoring women's menstrual cycles and their fertility,” Littlejohn explained. “All of that coercion will remain the same under a two-child policy.”

“A two-child policy carries all of the [same] terrible and appalling methods of abortion as the one child policy,” Ms. Littlejohn explained. “It's just that they start killing after two, instead of after one.”

Littlejohn went on to say that China's demographic problems resulting from 40 years of gendercide will not be fixed by the new two-child allowance. “Even if China were to completely abolish their policy right now, and allow to everybody to have as many kids as they want to have, it's going to take twenty years for the women to grow to the point where they can marry, and everybody to the point where they can be workers,” she said.

She said that the Chinese have “dug themselves in a hole that they can't get out of.”  Arroyo pointed out that there are 33 million more men than women in China today.

Littlejohn does not expect gendercide to decrease immediately. “What I think is going to happen,” Littlejohn said, “is couples who have a boy are going to stop at one,” because of the high expense of having children in China. “And those who have a girl first are going to continue to abort a second daughter, because they still want to have a son.”

When Arroyo pointed out that government statistics say 350 billion dollars since 1980 were levied in fines against those who tried to defy China's one-child policy, Littlejohn responded, “That's why I don't think China will ever abandon its policy: it's a huge money-maker for them.” She noted that local officials determine the amount of fines and line their pockets with the cash.

She pointed out that five years ago, the Chinese government admitted that over four hundred million babies in the womb have been killed – and that number is far greater today.

Littlejohn pointed out that any Chinese citizen who dares to tell the truth about the communist policy is persecuted. “People who get their stories to the West – not only do they have to endure the trauma of the forced abortion itself, but they have to endure trauma [against] themselves and their families from the Chinese Communist Party for seeing them before the world.”

“Thank God for Ted Cruz, also for Marco Rubio, and for Congressman Chris Smith – all three of those have come out with very, very powerful statements saying basically that the two-child policy does not fix any of the problems with the one-child policy,” Littlejohn said. “I'm so glad that they … are getting the truth out there.”

Republican presidential candidate Sen. Ted Cruz spoke against China's policy earlier this month. “In America, we should stand with victims of oppression,” he said. “These are horrific acts of brutality. They are inhumane. They are contrary not only to American values, but to human rights across the globe, and they are carried out as a matter of policy.”

Rep. Smith, chairman of the House subcommittee that oversees human rights and chairman of the Congressional-Executive China Commission, held a hearing entitled “China's One-Child Policy: The Government's Massive Crime Against Women and Unborn Babies.” Smith explained, “The policy has directly contributed to what is accurately described as gendercide – the deliberate extermination of a girl, born or unborn, simply because she happens to be female.”

In October, Republican presidential candidate Marco Rubio criticized China's two-child policy. “The policy is still repressive,” Rubio explained. “The fact remains that when couples conceive a third child, the Chinese government will force them to eliminate him or her, by any means necessary.”

Rubio concluded, “A two-child policy is as indefensible and inhumane as a one-child policy, and it would be a mistake to assume this change in any way reflects a newfound respect for human rights by Beijing. The U.S. must continue advocating for the complete elimination of government-forced population planning.”