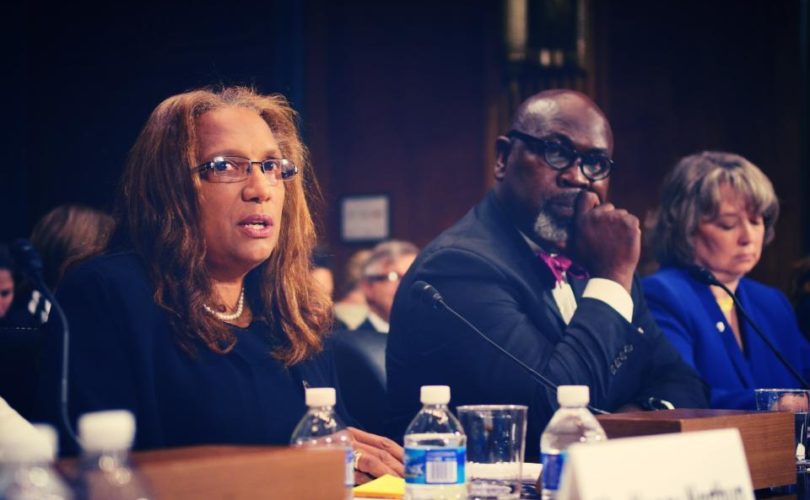 The benignly named but deadly Women’s Health Protection Act took center stage Tuesday in a Senate Judiciary hearing in which the realities of S.1696 became clear.

“This dangerous legislation could invalidate virtually any type of current state health and safety regulation and the kinds of common-sense regulation of abortion that has strong momentum across the country,” noted Americans United for Life President and CEO Dr. Charmaine Yoest. “Going even further, S.1696 would also prohibit the future enactment of laws designed to protect mothers and their unborn children from abortion industry abuses and trample Americans’ conscience rights.”

Detailing the health risks of abortion for women, Duke University Assistant Professor of Clinical and Epidemiological Research, Dr. Monique Chireau, addressed Senate leaders as part of the panel discussion of the proposed law. The distinguished physician and AUL board member noted that the bill “does nothing to protect women but everything to protect the abortion industry from oversight and accountability.”

Debunking the myth that abortion is “good” for women, Dr. Chireau examined the many harmful impacts of surgical and chemical abortion, including a 2011 meta-analysis of the data that included 22 studies and 877,181 women, which found “an 81% increase in mental health problems including depression, anxiety, substance abuse and suicide was noted in women who had induced abortion. The risk for mental health problems was increased 55% in women who had induced abortion compared with those who gave birth.”

The Committee also heard from Dr. Chireau about “the lack of oversight, reporting, data collection and monitoring of the abortion industry in the United States.” These deficiencies, Dr. Chireau testified, “have masked, understated and distorted the true extent of harm to women caused by [abortion]. This lack of accountability has contributed to other social ills as enabling the cover-up of the sexual abuse of minors, human trafficking and the exploitation of women.”

This legislation is the latest version of FOCA (the Freedom of Choice Act). S. 1696 is actually FOCA 2.0 and recklessly empowers abortionists to set the standard of care for their patients with no oversight from the state and no effective remedies for the abortion industry’s deficiencies and frequent malfeasance.

In fact, enactment of S. 1696 would invalidate hundreds of abortion-related laws, including:

Click here for more information on the health risks of abortion for women.