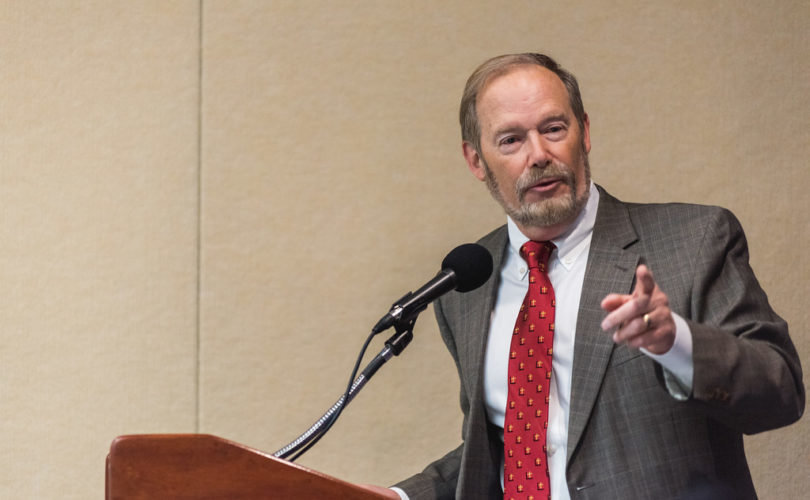 December 20, 2017 (LifeSiteNews) – China wants to displace the USA as the leader of the world, says a new book from American expert, Steven W. Mosher.

Bully of Asia: Why China’s Dream is the New Threat to World Order explains that the Chinese  government sees the USA as being in “terminal decline” and looks forward to taking back its “traditional place” as the “center” of the world. China’s current leadership, headed by the charismatic Xi Jinping, thinks this takeover will happen in the middle of this century.

Mosher, the president of the Population Research Institute, spoke to Raymond Arroyo on EWTN’s “World Over’ program to discuss his book, growing tensions between the USA and North Korea, and why Americans should worry about China instead.

China and North Korea are as close together, he said, as “lips and teeth.” North Korea, the lips, form a buffer zone protecting the teeth, China, from the American military presence in South Korea. Meanwhile, not only is China North Korea’s only trading partner, it has been providing North Korea with parts for its nuclear missiles.

Mosher, an authority on China’s harsh population controls, said that China exerts enormous influence over North Korea. “If China wanted to, it could turn the lights out in North Korea overnight,” he said.

This means that the route to suppressing North Korea’s threats against the USA and its allies is through diplomacy with China. However, it also means being aware that China does not have the USA’s best interests at heart, and that previous administrations have been taken in by China’s assurances in the past.

“We’ve been being played for a long, long time now, going on for a quarter of a century,” Mosher said.  China convinced both the Clinton and the George W. Bush administrations that if they gave humanitarian aid to North Korea, the missile program would stop. Billions of aid dollars later, it hasn’t stopped.

Mosher’s advice to Donald Trump is “Disarm North Korea; sanction China.” He believes that China has armed North Korea and has “set North Korea up as a bogeyman”  to distract the world while it carries out aggressive actions in the South China Sea and exerts soft power over the United States.

“We’re not paying attention, Raymond,” he said, “because we’re being distracted by this North Korean situation.”

Mosher stated that China has set up “about a thousand” schools across the USA, called “Confucius Institutes”, which teach American students the Chinese government’s take on Chinese history and culture.

Meanwhile, three topics may not be discussed on American satellite campuses in China: Taiwan, Tibet and the Tiananmen Square Massacre.

The goal is to weaken the USA. Xi Jinping’s dream is that China will soon rule the world, and “there’s only one country that stands in the way of that,” Mosher said.

“I think we saw some progress, at least on the trade issue, when Trump brought back 250 billion dollars in orders from China,” he told Arroyo. This, he believes, “goes a long way to righting the trade imbalance.” He thinks that Trump will keep the pressure on Xi Jinping to buy more American goods and services, “which will cause the factories to open up again, and American jobs to be created.”

However, Mosher was less sanguine about the human rights abuses and the persecution of Christians that is still going on in China. To anyone who thinks China might do a better job than the USA in leading the world, Mosher has a message.

“China’s dream is the world’s nightmare,” he said. “They want to replace [the USA] as the dominant power, but a world under China’s control would be less free. It would be less democratic. Human rights would be disrespected. It would be a world that would not only be bad for America, but for other Asian peoples and for the Chinese people themselves.”

According to Mosher, the threat posed to the world by Islamic terrorism pales to that posed by China.

“Fortunately, we now have an administration that seems to be paying attention,” he concluded.