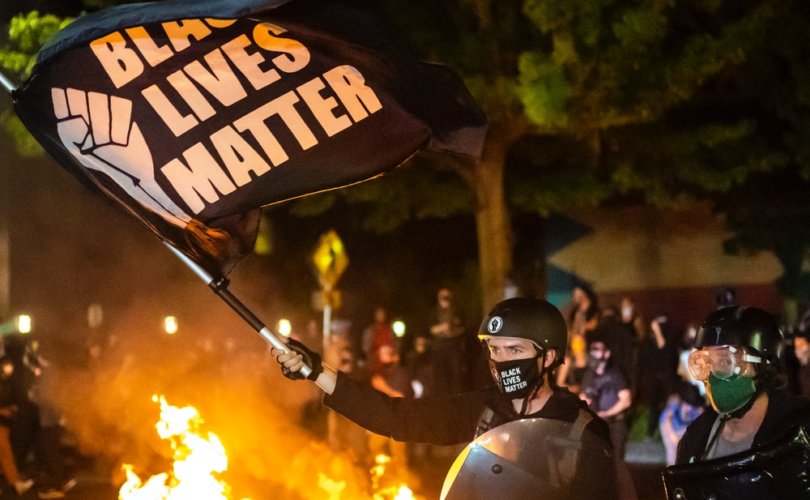 October 28, 2020 (LifeSiteNews) – The mainstream left is threatening to inflict “political terror” and violence against Trump and his supporters, even if Joe Biden wins the presidential election, Stella Morabito, an expert on cults and communist propaganda, wrote at The Federalist on October 26.

Morabito, a senior contributor to The Federalist, wrote, “I’m not talking specifically about the Antifa and Black Lives Matter street violence we’ve seen…I’m referring here to voices that normalize and promote open terror against any freedom-respecting person who has different views from those blessed by left-wing leaders, media, and Big Tech.”

Morabito listed seven “open threats” the left has made. These include Nils Gilman, who is the head of “the George Soros-funded Berggruen Institute,” essentially calling for the execution of a Trump advisor; a Salon article suggesting “criminal charges” be brought against Trump “and his key followers,” along with the launch of “a serious campaign to change the hearts and minds of Americans who have been drawn to this president’s agenda”; and former MSNBC host Keith Olbermann’s recent suggestion that everyone who supported Trump be prosecuted.

“If the Democrats take over the reins of power — in an election, a coup, or a bought-and-paid-for ‘color revolution' — what happens to those who have supported Trump?” asked Morabito.

Take a look at this Aug. 1 Salon article, which argues that even if Biden wins, Trumpism “will survive the election and continue to be an existential threat.” Author Paul Rosenberg examines the arguments in writings by John Feffer and other anti-Trump pundits who believe there is a lot of work to be done to force the “de-trumpification” of America. They compare Trump supporters to Nazis or the Baathists of Saddam Hussein’s Iraq and describe America under Trump as a “pathocracy.”

Rosenberg cites Feffer, who says the solution is “to drain the swamp Trump created, bring criminal charges against the former president and his key followers, and launch a serious campaign to change the hearts and minds of Americans who have been drawn to this president’s agenda.” He even brings up the Nuremberg trials as instructive, trials that resulted in death sentences for 37 Nazis.

That isn’t good enough, however, according to Feffer. It’s important to go after “low-level participants” to root out Trumpism. It recommends enforcing this changing of “hearts and minds” so that there is “an attitudinal shift that could lead to lasting transformation.” This is not a far cry from re-education camps and coercive thought reform.

In fact, Larry Grathwohl, a former member of Weather Underground, said in an interview some 50 years ago that many people would be sent to “re-education centers,” where they would be taught “the new way of thinking” and that an estimated 25 million Americans would be killed because they could not be “re-educated.”

As Morabito noted, former MSNBC anchor Keith Olbermann stated that Trump and his supporters “must be prosecuted and convicted and removed from our society while we try to rebuild it.”

CNN contributor Reza Aslan took it a step further than Olbermann when he openly called Trump a “nationalist terror leader” and demanded that Trump and his supporters be “eradicated from society.”

Morabito also brought up recent attacks against American leaders. Specifically, Morabito referenced the violent mob Sen. Rand Paul (R-KY) and his wife experienced when they left the Republican National Convention and the mock guillotine and Trump doll that agitators placed outside the White House.

Finally, Morabito warned that the left is turning to “doxing” – the publishing of personal information like addresses – to target Trump supporters. She stated that “The Media Manipulation Casebook” is being used to gather personal information to expose Trump supporters and that Federal Election Commission data and other open-source materials are being used to target Trump’s donors.

“If Democrats gain control of the White House and other branches, the left has spoken openly of their intent to punish a huge swath of Americans with a program that threatens to cancel them, impose thought-reform programs on them, and worse,” predicted Morabito.

In closing, Morabito warned Americans that history is “littered with societies filled with decent, normal people who descended into chaos and murder, often incited by propaganda from a heavily controlled media” and that Americans must remain vigilant so that they “don’t repeat some of the darkest days of history.”