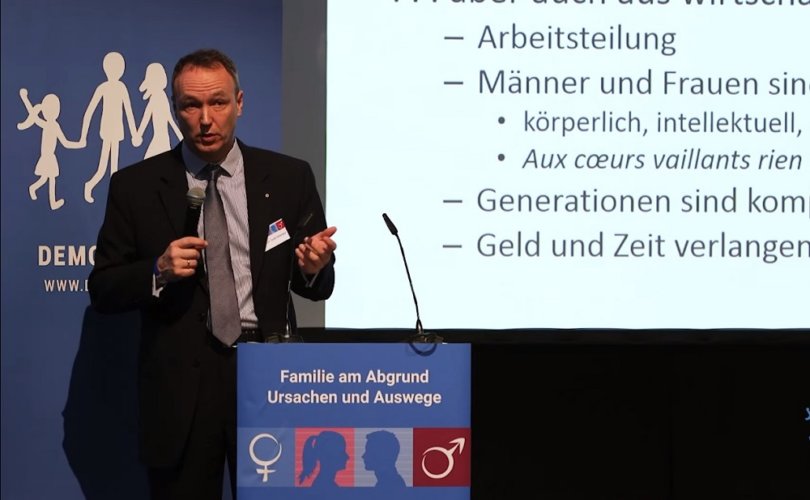 “Today, we have above all state interventionism to the detriment of the family,” Hülsmann said.

The symposium, organized by DemoFürAlle, took place on February 15 in the German town of Böblingen. Apart from Hülsmann, major speakers were Imre Téglásy, director of Human Life International in Hungary; Raphael Bonelli, an Austrian psychiatrist; and Hubertus Knabe, a historian intimately familiar with the authoritarian government in former East Germany.

Hülsmann explained that the modern state was created in contradistinction to a society based on natural law. Thus, the state was able to define what is right and what is wrong. The modern state has a tendency, he said, to grow in an “unlimited” way.

The professor argued that the state generally does not intend to harm families. Sometimes, the state might not even be aware of the consequences of a policy. Other times, the harmful consequences are in fact known and approved nonetheless, because the policy would improve another situation.

In that context, Hülsmann strongly criticized “our current monetary system, because it generates constant price inflation, which is quite deliberate.” Price inflation “creates irresistible incentives for a debt economy.”

“If you have constant price inflation, then it is worthwhile for everyone to finance long-term investments by credit,” Hülsmann said. He then asked, “How many families have been broken by the fact that there were debts the family was unable to pay?”

Hülsmann also referred to the modern state’s goal to emancipate and liberate the individual.

Laws allowing abortion and divorce make it less attractive for a man to get married, since the woman is more easily able to destroy the family at any point, he explained. Kids staying at school until the late afternoon, which was very uncommon in Germany, leads to an education less optimal than it could be, Hülsmann said, since the parents are no longer raising their own children.

The retirement and health care systems in a modern welfare state are not the best for families, according to Hülmann.

“You don’t necessarily need the wife or the husband to cope with these life problems, to prepare for old age, to stay in good health. In principle, you can have any lifestyle you want. You can do dangerous sports, consume excessive alcohol, take drugs, etc. In the end, all responsibility is taken away,” he said.

“Since you know that you will receive a state pension, the incentives to have children in the first place and to raise children decrease, because you receive payment regardless of whether and how many children you yourself have raised as future taxpayers. The benefits will be socialized and the costs of raising children will remain private,” the professor clarified the retirement question.

Hülsmann concluded by pointing out that long-term goals to help the family in the modern state require short-term sacrifices.

Imre Téglásy of Human Life International in Hungary started his talk by looking at the term “nation.” Since “nation” is from the Latin word nasci, which comes from the word meaning “to be born,” Téglásy reasoned that there are no nations without births.

Hungary still has a low birth rate, even compared to other European countries, but the government has implemented certain measures intended to increase those numbers.

Some of the incentives of Hungarian government, led by prime minister Viktor Orbán, include tax benefits and home purchase loans for families, more spaces in nurseries, various transfer payments for couples with more children, car subsidies, and no income tax for mothers of four.

All of this sounds good on paper, but Téglásy looked at the effect those policies had. He said there was practically no improvement for many families in need, while the subsidies still help that part of the population that is wealthier.

While Fidesz, Orbán’s party, targets middle-class families, the fertility rates of poorer families that did not benefit from the policies increased more significantly.

Overall, the fertility rate went up from 1.25 to roughly 1.4 in the course of the last eight years. According to Téglásy, however, all Eastern European countries increased the rate slightly after the fall of communism.

Hungary’s new constitution states, “Every human being should have the right to life; embryonic and fetal life should be protected from the moment of conception.”

Nevertheless, the law permitting abortions is still in force. Up to 30,000 abortions are performed every single year in Hungary. Téglásy mentioned that Poland, another Eastern European country with a conservative government, has only 1,000 abortions per year.

“Now it is high time for true conservatives to stand up for a full turnaround. It is time to return to God, the Creator and Lord of the universe, and to the constitution of natural law,” the director of Human Life International in Hungary said.

“It is also high time to fully and uncompromisingly recognize as persons all human beings who are still in the bosom of their mothers. We are convinced that the bosom of mothers is the most intimate and dearest border of every nation, including the Hungarian nation.”

“The atheistic profit-oriented model of Western societies continues to prevent us from recognizing the rights of children before birth and the right of parents to educate their children,” he concluded.

Hubertus Knabe, who has studied the history of former East Germany, began by quoting from the family laws of that country, which referred to the family as the nucleus of society. However, “the reality looked very different.”

Kids spent ten hours or more of their day in daycare, as the mother was required to work. “After work, the second shift was waiting for the women, namely shopping, looking after the children, working in the household.”

According to Knabe, that second shift amounted to about 47 hours every week, since modern conveniences, including stores that have everything in stock, were generally unknown in East Germany.

There was also a lack of places to live. Only after getting married, people moved up on the waiting list of those looking for an apartment. When the Iron Curtain fell in 1989, Knabe said, 800,000 people were on that list.

“The most prominent example of such a marriage is our chancellor, who is called Merkel because after graduating she married Ulrich Merkel, a fellow student, in order to get an apartment in Berlin, and then divorced him after a short time,” Knabe pointed out.

In fact, many marriages ended quickly, but often they bore children. “Statistically, divorce usually occurred within the first three to four years of marriage.”

Even though East Germany had many policies intended to help families, for instance extra money for every child, and loan money at the beginning of marriage that did not have to be paid back after a certain number of children, the fertility rate was only 1.4 in the late 1980s.

Raphael Bonelli, a psychiatrist in the Austrian capital of Vienna, said that from a psychological perspective, the family is the nucleus of society. The subconscious desire of every human being is to “grow old” with somebody else.

“No one has ever told me, ‘I have a longing for a person I can live with for the next five years, and then I separate from him.’ There’s no such thing,” Bonelli emphasized.

Narcissism and perfectionism destroy the family, he explained, because they focus on the “I” instead of on the other person.

What makes free human beings and happy relationships is self-transcendence toward the True, the Good, and the Beautiful, the psychiatrist said.

In order to lead a good life, self-transcendence is key, but in a certain order: God first, then the spouse, the children, the parents and parents-in-law, and finally siblings.

“You won’t believe how many people infringe upon that hierarchy,” Bonelli said. “If the hierarchies are not clear, families don’t work.” Many people even put their career at the top.

Bonelli concluded with a few comments on family policies, and the lack of recognition for mothers. “Smart people have children and no time to argue with idiots,” he said, referring to people with a family who have better things to do than petitioning politicians.