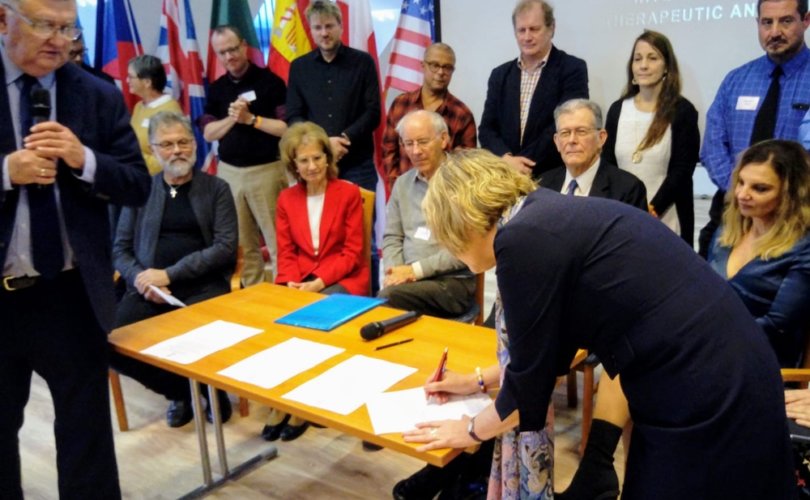 BUDAPEST, Hungary, November 22, 2019 (LifeSiteNews) – The International Federation for Therapeutic and Counselling Choice (IFTCC) has just released its 2019 Declaration, stating that, “everyone should have the freedom and right to walk away from sexual experiences and practices they find unfulfilling, and have support to do so.”

The IFTCC supports dedicated providers of services to individuals seeking to change their unwanted relational and sexual behavior, attractions and patterns, including unwanted same-sex attraction.

Because of this courageous stance – as well as an approach to their discipline, based on a Judeo-Christian understanding of the body, marriage and the family – the IFTCC has often faced hostility from LGBT activists and governments which have bought into LGBT ideology of fluidity in sexuality.

The 2019 IFTCC Declaration was just issued last Sunday at their conference hosted in Western Hungary, where hundreds of therapists, doctors, clergy, activists, and interested citizens, from 23 nations, met to discuss the topic, “In Search for Identity as Man and Woman”. The subtitle of the conference was, “How Can We Offer Help to Those Who Struggle?”

LifeSiteNews’ staff member Scott Schittl was able to be present at this year’s conference, to listen to, and learn from, the many expert speakers who gave presentations and workshops over the three-day weekend. Several interviews, like the one with Dr. Mike Davidson, Chairman of the IFTCC, were also recorded.

One of the main themes, emerging from both the conference and the Declaration, was the pre-eminence of client choice. That is, the IFTCC believes that people should be free to leave and disavow the homosexual lifestyle.

The Declaration states that the IFTCC objects to, “ongoing discrimination against persons formerly gay-or-transgender-identified, who have, or will in the future seek professional counselling or pastoral help to assist their transition from unwanted behaviors and feelings.”

Again, the IFTCC supports the freedom of people who are experiencing unwanted same-sex attraction, to seek counselling to help transition away from those attractions.

The conference’s wide range of talks, discussions and practical workshops gave attendees (and, those struggling with unwanted same-sex attraction and gender identity problems) a primer into professionally sound and ethically grounded ways to approach these sensitive issues.

All conferees were agreed when it came to dispelling the notion that sensible and ethically-sound change-allowing therapies could, in any way, be conflated with so-called “conversion therapy”.

The authors of the IFTCC 2019 Declaration gave special attention to this point.

“Consistent attempts by LGBT activists in governments and elsewhere to conflate the fake term ‘conversion therapy’, including electro-shock and morally reprehensible aversion techniques – all administered by the world’s medical fraternities – with standard, predominantly psychodynamic, evidence-based talking-therapy explorations of fluid sexual attractions, is disingenuous,” states the declaration.

“This is an unacceptable political strategy.  It continues to damage those now forced to live with homosexual or transgender identities as professionals are denied the opportunity to support client-choice to leave unwanted homosexual and transgender practices…”

Those who are experiencing unwanted same-sex attraction, or who are seeking more information about de-transitioning, but haven’t been able to find the required resources, are invited to visit the IFTCC website for more information.