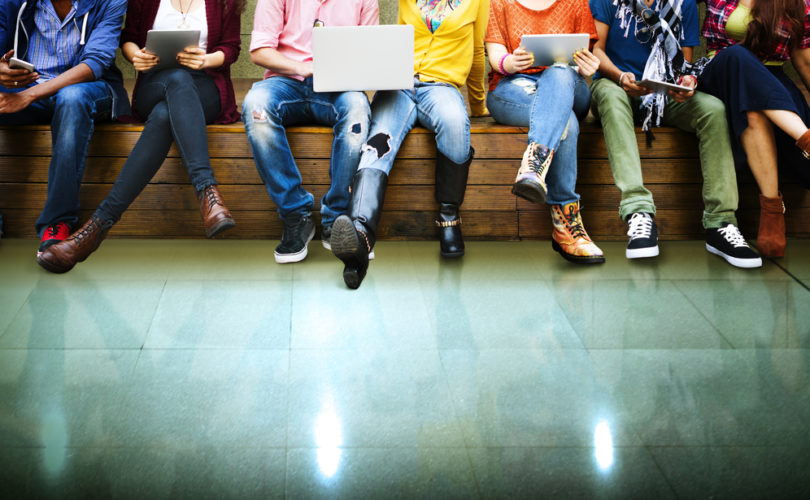 WASHINGTON, D.C., March 17, 2016 (LifeSiteNews) — A new poll that alleges teenagers are gender-fluid is getting panned by pro-life researchers, a media expert, and a polling professor.

Last week, The Innovation Group, part of the international trend forecasting and data analytical group J. Walter Thompson Company, released a study of Millennials and “Generation Z” Americans that they claimed shows teenage Americans were more gender-fluid in self-identity, and in their choice of clothing and other product purchases.

“We did a survey of Gen Z for a report released in May 2015 and found that 81 percent said that gender doesn't define a person as much as it used to,” Shepherd Laughlin, the director of trendspotting at J. Walter Thompson, told Broadly. The new study's findings were presented in Austin, Texas at a panel entitled “Generation Z and Gender: Beyond Binaries.”

Laughlin told Broadly that while fewer than one thousand people responded to the poll, he was “90 percent” confident that the survey was accurate. “We're even more confident about this for this particular survey because we see clear patterns across the different questions that show that Gen Z has a more complex and less binary approach to gender than millennials.”

The study found that only 48 percent of Generation Z respondents — aged 13 to 20 — identified as exclusively heterosexual, compared to 65 percent of older Millennials. It also found greater awareness of abnormal and unnatural gender identities, purchases of clothing designed for the opposite sex, and other related changes in how teenagers view sexuality compared to people in their twenties.

Several experts in sexuality, gender, and public image slammed the study and its findings in comments to LifeSiteNews.

“The findings reported in the article contradict the best evidence we have,” said priest, social science researcher, and Catholic University of America professor Dr. Paul Sullins. “This would be from the National Survey of Family Growth, as reported by the CDC in 2011. That report finds that in 2006-8 94% of women and 96% of men identified as exclusively heterosexual. Note that both proportions *increased* from 2002 to 2006-8, when 90% of both women and men so identified.”

“Kinsey, in 1948, also reported that 'only' about 90% of young Americans were exclusively heterosexual, almost exactly the same as these numbers from 2011 (based on data through 2008).  These numbers have been stable for 60 years.  The idea that they are rapidly changing, based on a small marketing survey, is not convincing.”

While Sullins said that “Walter Thompson is a reputable marketing survey firm, so I would tend to think it is well done,” he noted that “the standards for marketing research are generally looser than for academic research.”

Family Research Council Senior Fellow Peter Sprigg likewise used the CDC's research to push back against the gender binary survey. “I think there is no question that adolescents and young adults today are probably experiencing greater 'fluidity' in terms of their gender and sexuality than their older peers, and greater than in past generations,” said Sprigg. “However, I am skeptical of some of the specific numbers cited, such as the claim that 'only 48 percent of Gen Zs identify as exclusively heterosexual, compared to 65 percent of millennials aged 21 to 34.' This conflicts with recent findings released by the federal government and based on the National Survey of Family Growth.”

“I don't find the questions in this survey particularly relevant to the national discussion,” Robert Morris University Associate Dean Philip Harold, Ph.D., told LifeSiteNews. “The reason is the questions they chose to ask just aren't relevant.”

“A number of them are based on hearsay. The group is not asked for their opinions or beliefs, but what they believe other people think. For example, 'Gender doesn't define a person as much as it used to' is an interesting wording choice, given that they are only polling young people under 35. What is the basis of comparison?  For someone who could remember the 1960s and 1970s, unisex clothes were all the rage. No pink toddler clothing was allowed during a period in the 1970s in the Sears Roebuck catalog, but nobody young knows that.”

“Same goes for the question, 'People are exploring their gender identity/sexuality more than in the past.' An accurate answer would be from older people, since they are the ones who remember it — people under 20 don't really have a clue about what things were like in the past, so they're just guessing. Interestingly, the survey does not ask respondents if they use certain words, or if their friends do, but only if they 'have seen or heard them before.' So hearing something once in a media report would count.”

“There's not many conclusions that can be drawn from these questions,” Harold concluded.

“Note also that about twice as many young women experiment with alternate sexual identities as do young men,” said Sullins, who like Harold declined to comment on the full methodological procedures used in the survey, which are behind a $1,000 pay wall. “[Looking at the age breakdowns] about ten percent of women under age 25 reported being not exclusively straight, compared to only under 5 percent of men the same age. … So it would be important to know the results of such claims by sex (or gender, whatever we're supposed to call it now), which the article does not report.”

“You could say that the sex differences in early experimentation in identity reinforce the sexual binary.  Otherwise, there would not be such a huge difference between boys and girls on this,” continued Sullins.

Sullins also noted that “'Sexual identity' is the least precise way to measure the sexual binary. The CDC also measures 'sexual attraction.'  99% of young persons, both men and women, report that they are attracted exclusively to members of the opposite sex; a proportion that changes little throughout life.”

“The sampling procedures and other methodology for this survey are not clear to me from the reports available to date,” said Sprigg. “If the data is based on an online survey, for example, there is every possibility that the respondents were not representative of the general population. I am inclined to give more credence to a well-established survey such as the federal government’s National Survey of Family Growth, which did not show such dramatic deviations from the norm.”

“I would attribute the greater fluidity that does exist to experimentation that is glorified within the educational establishment and in the media, including online and social media,” said Sprigg. “I therefore disagree with the argument that these identities always existed, but are now simply easier to name.”

“Personally I wouldn't be surprised if younger teens reported more confusion regarding sexual identity, given the current PC climate of most middle and high schools, and the lack of clear signals about sexual roles and identity in today's culture,” said Sullins. “But this will have little effect on the basic fact that almost all persons are interiorly attracted to persons of the opposite, not the same, sex.”

“First of all, what people tell a survey and how they really live their lives are different,” said Media Research Center's Dan Gainor. “Tons of media people tell us Bruce Jenner became a woman. How many straight men would ask Jenner for a date? Not many I’d guess.”

“Next, certainly young people have been bombarded by propaganda to convince them to be gender confused or gender trendy. Gallup polls indicate more than half the nation thinks the gay population is at least 20%. Turns out they are almost 10 times higher than reality. That’s thanks to the media.”

“Academia teaches kids to be different, to embrace bogus pronouns instead of real ones,” continued Gainor. “Instead of encouraging kids to act normal, we have an entire media/academia enterprise geared to push them to be alternative. We’ve got media outlets profiling brave families encouraging transgenderism in young kids. If a young child tells a parent he wants to be a unicorn, will we have to let that happen as well? Let’s cut off a 4 year old child’s hands and replace them with hooves because today he wants to play unicorn. Insanity.”

How should social conservatives respond?

“Social cons need to be worried and take this seriously,” urged Gainor. “Parents need to enforce their morality and not let schools dictate it. If possible, get your kids the heck out of public school. Next, watch their media with them and educate them about how Hollywood is spinning news and entertainment in ways that undermine faith and values. Lastly, conservatives need to push back hard demanding positive media role models of traditional beliefs and working to generate their own in new media.”

“I think marriage and natural sex identity proponents should react to this report with a great deal of skepticism, and ask for more proof,” said Sullins. “As Mark Twain said, 'The reports of my death are highly exaggerated.'  Here the report of the death of male/female complementarity is highly exaggerated.”

“I find it somewhat ironic that it is often the same people who insist on eating only ‘natural’ food raised using 'organic' methods who will then turn around and celebrate the wholesale construction of completely artificial identities in the area of gender and sexuality,” noted Sprigg. “We need to remind people that our sex and sexuality are essentially dictated by our biology, which in almost all cases is unambiguously and immutably male or female at birth. We should encourage people to embrace this 'natural, organic' view of human sexuality.”