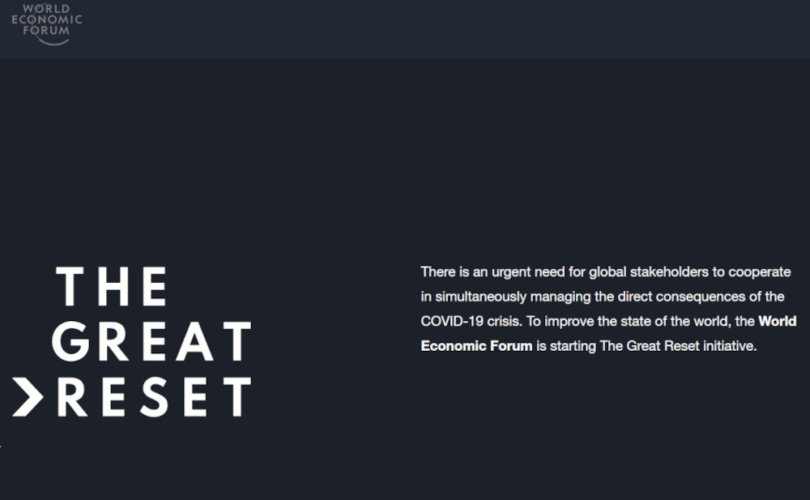 November 10, 2020 (LifeSiteNews) — An increasing number of whistleblower doctors, lawyers and academics are speaking out and organizing globally to fight the ongoing unjustified and “criminal” coronavirus lockdowns, according to speakers at the recent Truth Over Fear Summit on COVID-19.

All speakers at the summit in October agreed that the lockdowns are causing far more harm than COVID-19 itself, and many believe the pandemic is tied to the plans of global elites to implement a worldwide socialist surveillance state through the “Great Reset,” which was recently featured on the cover of Time Magazine.

“There are safe and effective treatments (for COVID-19) which should be made available, and everything else is about trying to control how many people (are) in your house, whether you can practice your religion, whether you have freedom to travel, whether you can assemble at rallies and not be threatened to be arrested by the police,” she said.

“This is really what it’s about. It’s actually not about the virus. It probably never was,” added Cahill, who in June was asked to resign from the European Union’s Scientific Committee of the Innovative Medicines Initiative over her views on the coronavirus.

Moreover, people around the world are increasingly pushing back against the lockdowns, said lawyer Reiner Fuellmich, a member of the private German Corona Investigative Committee.

“More and more people are changing their attitudes from being fearful and afraid to becoming actually angry, especially those people who are losing their livelihoods,” Fuellmich said.

“All the people … whose economic existences are being destroyed right now, they’re changing their attitude from, ‘Whoa, I think we’re going to have to wait a while,’ to, ‘No, this is it. I don’t believe in this anymore. And I want to find a way out of this.’”

Fuellmich and Cahill were two of 25 speakers from seven countries who took part in the virtual Truth Over Fear Summit, organized by California-based Catholic broadcaster, speaker and author Patrick Coffin.

A number of summit speakers are members of America’s Frontline Doctors, and summit presenters echoed that group’s concerns: ongoing lockdowns are unjustified and doing far more harm than good, and, along with mask mandate and social distancing requirements, are unconstitutional limits on individual liberty; proven treatments of the virus, notably hydroxychloroquine (HCQ), are being ignored or suppressed; those who speak out against the mainstream narrative are censored and punished; media are colluding with government to keep populations in a state of fear that is entirely out of proportion with the risks to health COVID-19 presents.

Cahill and Fuellmich are taking different roads to fight the pandemic “oligarchs,” as Coffin frequently referred to them.

Cahill is organizing on the international level and is president of the newly formed World Freedom Alliance, which is represented by 35 countries.

One of their goals is to bring to justice those individuals whose policies are directly responsible for what Cahill says were entirely preventable COVID-19 deaths, given that “this is a 100 percent treatable disease.”

“There was no known moral, ethical, legal, scientific or medical basis” for the World Health Organization (WHO) to declare a pandemic on March 11, 2020, at which point the number of COVID-19 deaths was one percent of the annual influenza deaths, she told Coffin in an online Q&A session.

Moreover, while the drug hydroxychloroquine has been known since 2003 to be an effective treatment against SARS-Cov-1, in many countries its use was suppressed, and Australia is threatening jail for doctors who prescribe it, Cahill said.

“So, therefore, the issue now is, why didn’t the doctors make the treatment available and why didn’t the politicians … and the legal system and the police” ensure this, she said.

“A lot of the newspapers, the media in the countries are not making this information available. And also, people that are speaking out, like doctors and scientists and lawyers, are being fired from their jobs. So, this is a fundamental breakdown of society,” added Cahill.

The World Freedom Alliance (WFA) is planning to bring legal actions against those individuals in government and health care who are “personally responsible for the harm that they’re causing,” because if people “don’t get treatment, it’s criminal manslaughter, and there is a lot of criminal activity going on,” she said.

“So therefore, we are setting up a new international regulatory body where the doctors would be required to give you full informed consent and they can be held to account.”

The World Freedom Alliance will also be “working with the international Tribunal of Natural Justice and the People’s Court,” Cahill said.

Citizens pay taxes to their governments for services, and if those governments “are actually not providing the services and they’re making claims of curtailing our lives based on false information, then we really need now to strategically look at these countries” to set up alternative political parties and take legal action, Cahill added.

Fuellmich and a group of international lawyers are suing the WHO and others over damages caused by coronavirus lockdowns.

They allege that PCR tests were misused to falsely inflate COVID-19 infection numbers, which were then used by governments to justify lockdowns and other restrictions.

“And it turns out this is a big, big lie,” Fuellmich told Coffin in a Q&A session.

“Attorneys are trying to catch on to what’s really going on and to understand that the PCR tests are at the core of this. If you destroy the PCR test in a court of law, then this whole house of cards is going to come crashing down,” he said.

Fuellmich agreed with Coffin’s statement that deaths resulting from the lockdown measures are “wrongful deaths,” and he said “the cure is far, far worse than the disease could ever have been.”

“What we’re dealing with is not negligence,” said Fuellmich, whose video “Global Crime of the Century” was viewed millions of times on YouTube.

“If you rely on just one person and you do not want to see the other side … even though it’s out there, then that makes it intentional when you kill people, because that’s what’s happening.”

In Germany, that one person is virologist Christian Drosten, who first developed the PCR test that is used to test for COVID-19, and “invented this whole scheme,” Fuellmich said.

But while Drosten is a key figure, “of course, somebody else is pulling the strings.”

Those are “the people who make the decisions,” such as German Chancellor Angela Merkel and Klaus Schwab of the World Economic Forum, who is pushing the Great Reset along with other members of the global elite such as billionaire Bill Gates, who in turn is pushing mandatory COVID-19 vaccines.

However, his lawyers are concentrating on class action lawsuits that name Drosten, the WHO, and Lothar Wieler, head of the German Robert Koch-Institut (roughly equivalent to the U.S. Centers for Disease Control and Prevention), and not the elites – yet, Fuellmich said.

“We don’t have enough on them, but we do believe that if we keep following the facts by suing these people, the facts will ultimately lead us right to where we think we need to go. And that’s to Bill Gates, Klaus Schwab and all the others,” he told Coffin.

His group of lawyers, which number about 30 in Germany, are launching class action lawsuits mainly in Germany and the United States, Fuellmich said.

About 10 of the German attorneys work for large law firms, which fear losing major clients if it were known their lawyers are working on COVID-19 cases. “And the attorneys, of course, are afraid that they’re going to lose their jobs if they come out into the open.”

His group has been bombarded with emails seeking information, Fuellmich added, with many requests from lawyers.

“They just want the factual information, the facts that we gathered as the Investigative Committee. And they’re not afraid. They just … don’t know.”

‘We are part of the fight back and we will win’

Fuellmich advised those who want to push back against COVID-19-related government overreach to “try and ask as many questions as possible.”

“Don’t despair and get as many lawyers as possible into the game. And if they don’t know how the game is played, just get them to contact us … or our colleagues in the United States, because those two countries are probably at the forefront right now, Germany and the United States, and maybe Ireland because of Dolores Cahill. She’s doing great work there,” he said.

Cahill told Coffin that she and others have been aware for 20 years of the plan of globalists to undermine “the fabric of society” by taking control of international banking, health, politics, and the media.

“It’s all there in a lot of the strategy documents from the World Economic Forum and from the United Nations Agenda 21, as well as, you know, the cover of Time Magazine now,” she said.

“They do not have our consent. We are going to build alternatives to their media system and their banking system,” Cahill said.

“This World Freedom Alliance that we’re building, we have bankers, innovators, lawyers, doctors and scientists and farmers and people around the world. And we are in touch with a lot of very wealthy individuals all around the world who now want to support innovative initiatives that can actually address this problem,” she told Coffin.

“I would say, game on to the globalists who are trying to curtail our rights. We are part of the fight back, and we will win.”

Lawyers prepare to sue over damages inflicted by COVID-19 lockdowns