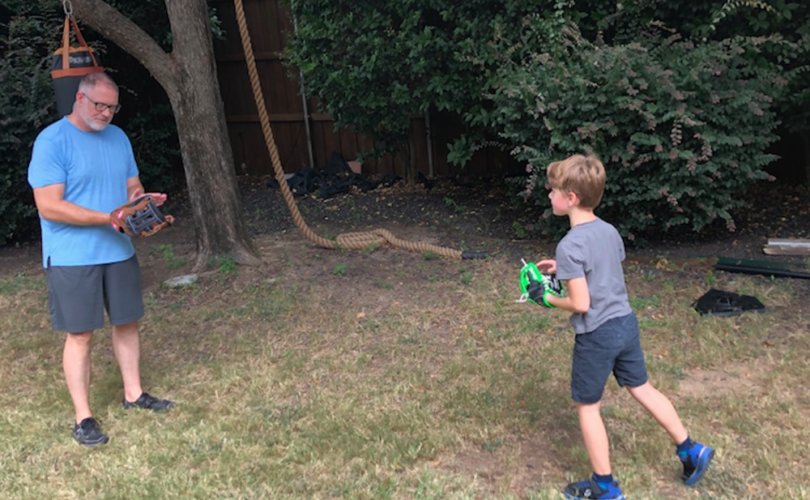 TEXAS, October 18, 2019 (LifeSiteNews) – In court yesterday, expert witnesses warned against administering puberty blockers or cross-sex hormone therapy to children as Jeffrey Younger fights to save his seven-year-old son from being “transitioned” into a girl.

Mr. Younger and his ex-wife, Dr. Anne Georgulas, are fighting over custody arrangements and decision-making authority for their twin boys, James and Jude. Dr. Georgulas enrolled James in kindergarten as “Luna.” Mr. Younger is fighting to prevent James from being given puberty blockers or any other form of medical gender “transition.”

Mr. Younger’s attorney, Mr. Odeneal, questioned Dr. Stephen Levine, a renowned psychiatrist known for his work on human sexuality, and Dr. Paul Hruz, a pediatric endocrinologist. Dr. Levine was not one of the first to study gender theory, but he was one of the earlier practitioners in the field. Dr. Hruz is a professor of pediatrics and cellular biology at Washington University School of Medicine in Saint Louis.

Dr. Levine testified about the over-politicization of the field of “gender.” He explained that this caused him to leave the World Professional Association for Transgender Health, an organization he was closely involved with earlier in his career.

Dr. Levine testified to the four elements that play a role in creating gender confusion: biology, interpersonal forces, psychological forces, and social forces. He highlighted the important role proper parental nurturing – or lack thereof – plays in the development of gender dysphoria: “there is a disruption in the maternal or paternal bonding process somewhere along the way.”

Dr. Levine encouraged parents to make decisions for their kids now that will help them in the future.

“An ideal outcome of trans youth is to desist” back to the child’s real sex, he said, due to the psychological and social difficulties faced by transgender individuals. Dr. Levine stated that with children who present as transgender before puberty, it is “well known that the vast majority of [these] children desist.”

He cautioned that there is a correlation between affirming children in gender confusion early on and the confusion persisting.

“There seems to be an accumulation of evidence that children who are affirmed have a much lower rate of desistance.”

He also stated that it is important to find a proper medical practitioner who can understand the long-term impacts of “transitioning.”

“The responsible, knowledgeable professional needs to understand what is known about transgender teens and adults…so it is a long-term perspective that is on everyone’s mind.”

Dr. Levine continued, “There are some people who are passionately advocating early transition …The affirmation is intended to make the child happier now. The irony is, the happier now may predispose the child to misery later.”

Dr. Levine outlined the three main negative side effects of a hormonal “transition”: infertility, impairment of adult sex function, and a shortened life expectancy. He also told the court that the medical community considers the transgender population a vulnerable, at-risk group.

“If we can avoid these problems, why in the world wouldn’t we?” Dr. Levine asked. Citing scientific data, he continued, “The life of transsexuals is not a happily ever after phenomenon.”

He also explained that affirming someone in his or her gender confusion does not reduce the risk of suicide. There is no scientific evidence to suggest otherwise, he said.

When pressed by Dr. Georgulas’ lawyers, Dr. Levine reiterated his support for a “wait and see” approach and considering what is best for the child long-term.

Dr. Paul Hruz admonished the jury against the use of puberty blockers and cross-sex hormonal therapy. Dr. Hruz does not prescribe puberty blockers due to their serious side effects. He does not see how the possible benefits outweigh the significant and serious risks.

Puberty blockers shut down the function of the ovaries and testes. The long-term impact of using the drugs has not been studied. They are FDA-approved for precocious puberty, but not for use in treating gender “dysphoria.”

Dr. Hruz testified that the risks of cross-sex hormone therapy include increased risk of stroke and heart attack and other serious health problems. The health impacts are cumulative over time, he said.

“Data that has been mentioned about the vast majority of individuals having spontaneous desistance is in the setting where social affirmation was not provided,” Dr. Hruz continued. “Children who are affirmed [in gender confusion] are more likely to start puberty blockers and cross-sex hormones.” They then “need to be dependent upon the medical establishment for the rest of their life.”

He encouraged people to get an opinion from a well-educated provider who will work to understand the “psychological factors that contributed to the underlying identity.”

Dr. Hruz refuted the statements Dr. Daniel Schumer made the day before. Schumer claimed that cross-sex hormones are treated essentially the same in the body regardless of biological sex. The “response to these [cross-sex] hormones will be very different when you expose them to a biological female versus a male,” explained Dr. Hruz.

“I would say the whole field of all of the interventions that we are doing with gender dysphoria is experimental,” Dr. Hruz told the court. He reiterated that the long-term effects of these interventions are unknown. “We need to acknowledge that what we are doing have many proven risks with unknown benefits with substantial harm.”