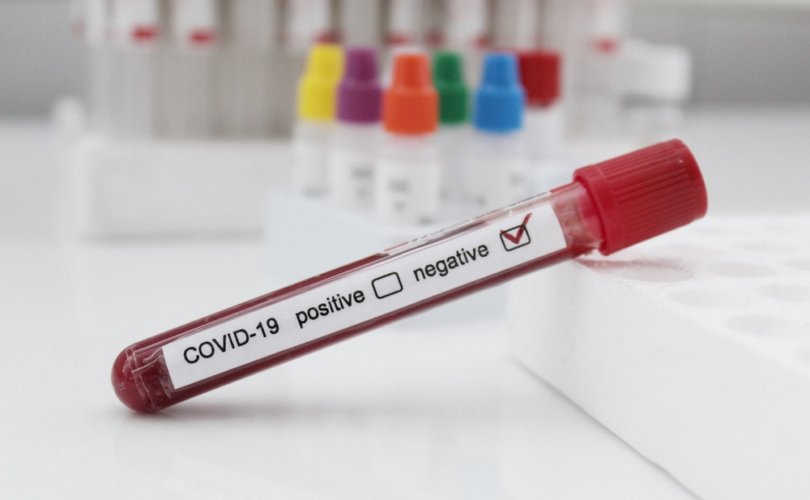 The Western Journal reports that Liberty University “says it finished its semester without any coronavirus cases despite receiving sharp criticism over its president’s decision to keep the campus open for students.”

“Liberty University president Jerry Falwell Jr. was widely condemned for his decision to reopen his campus to students who had nowhere else to go in March,” the outlet explained. Falwell said 1,200 students “came back to stay in the dorms for seven weeks and they were students who either didn’t have high-speed internet, had elderly relatives living at home or were international students.”

June 12, 2020, 11:06 a.m. EST: The conferencing app Zoom, which has been used all around the world to connect people during the coronavirus lockdowns, has admitted to helping the Chinese communist government by suspending the accounts of human rights activists who were virtually commemorating the Tiananmen Square massacre or discussing the Hong Kong freedom protests.

The priests are part of the Society of St. Pius X.

“Has the coronavirus increased the U.S. abortion rate?” New asked. “Certainly the economic slowdown and the sharp increase in the U.S. unemployment rate have led to widespread economic hardship. Additionally, research has steadily indicated that a significant percentage of women seeking abortions do so for financial reasons.”

New explored the anecdotal and self-reported data about abortion during the pandemic, as well as the “only hard data” available, which comes from Florida. Abortions in the Sunshine State during the coronavirus have increased by about 3.5 percent.

Medical effectiveness is irrelevant. Severe indoctrination begins: Your face must be covered. To decline to wear the Mask means that you don’t care about anyone but yourself. You are selfish. Next thing you know, someone will declare it a hate crime.

Listen, they say with forked tongue. It’s a little thing to wear the Mask–a small act of charity, an expression of kindness. You could wear a bandana or a lace scarf or a surgical mask. No problem. It’s the symbol that counts, the badge of caring.

In preparation for this final unification, something that can only be described as a cult is emerging among the people. Shall we call it the Cult of the Mask? It would fit. In the same way that we reveal our Catholic Faith by wearing crosses or medals, by twining a rosary around our wrist, or wearing a mantilla, so the Mask-wearers signal their belonging to the new consensus by covering their faces. Some don’t like it; others relish it. Most of them don’t even think about it—sort of like fastening your seatbelt. It’ll keep them safe

It would be bad enough if the Maskians just kept to themselves and left the rest of us alone. But they don’t. Mask-wearing has become a pathological obsession. The freedom of the open-faced is seen as a threat to their safety and, more significantly, to their sense of commitment to a great cause. They fight the phantom danger.

For now, most of their weapons are psychological—shame, ostracism, calumny. But there are other, more serious attacks on the rise. Calls to the police, video postings on social media, foul-mouthed confrontations…

The Archdiocese of Toronto has released a timeline and guidelines for the re-opening of its churches. They state:

Upon the strong recommendation of medical authorities, Holy Communion is received only in the hand at this time. (Since each communicant has the right to receive communion either on the tongue or in the hand, the traditional practice of the option of receiving on the tongue will be restored as soon as the public health situation allows for that). Communicants are instructed to remove their masks, using the straps and without touching the front of their masks, while the person ahead of them is receiving Holy Communion.

June 10, 2020 (LifeSiteNews) – Immunity to the coronavirus could be “a new class system,” warns an article in The Guardian.

“Experts predict that if [coronavirus] survivors are found to be immune, they could perform a range of jobs and services – such as volunteering in hospitals and nursing homes, caring for coronavirus patients and working in shops and food processing plants – risk-free,” Miranda Bryant wrote. “And, depending on how authorities, business and society at large respond, they could also be entitled to greater freedoms.”

Bryant pointed to Chile issuing “release certificates” to people who “complete quarantine after testing positive” for the coronavirus and comments from Dr. Anthony Fauci and Dr. Ezekiel J Emanuel supporting the idea of immunity “certificates” or “passports.”

Emanuel is advising former Vice President and 2020 candidate Joe Biden. Fauci has been director of the National Institute of Allergy and Infectious Diseases for decades and is one of the top people leading President Donald Trump’s coronavirus response.

Fauci said Tuesday that the coronavirus is his “worst nightmare.”

“We’re still at the beginning of it,” said Fauci, who has faded from frontpage headlines as the country focuses on protests and civil unrest over the killing of George Floyd.

Fauci’s remarks come as the World Health Organization once again flip-flopped its position on whether the coronavirus can be spread through asymptomatic people.

A study by researchers from Harvard medical school, Boston University of Public Health, and Boston Children’s Hospital suggests “coronavirus may have been present and spreading in Wuhan as early as August last year,” The Guardian reported yesterday. The study analyzed satellite imagery of parking lots outside major hospitals and search engine data.

“In the past few weeks, state officials across the country have blatantly violated the free exercise and free speech rights of religious Americans,” Senator Josh Hawley, R-MO, wrote to Attorney General Bill Barr in a June 9 letter.

Hawley urged Barr to “launch a full civil rights investigation” about the violation of Americans’ First Amendment rights to freedom of assembly and religion under the coronavirus.

“As our Constitution allows, Americans have the right to peaceably protest. Millions of people are rightly angry about the death of George Floyd, and they should be able to protest peacefully,” Hawley wrote (emphasis added). “Now, after two weeks of nationwide protests, no uncertainty remains. Many jurisdictions across the nation are imposing extraordinarily strict caps on religious gatherings—such as restricting religious gatherings to 10 or fewer people—even as those jurisdictions allow thousands of people to gather closely in protests. States cannot allow one but prohibit the other.”

“Hawley’s request to Barr follows a controversial 5–4 Supreme Court decision on May 29 in which the majority upheld California’s restrictions on church gatherings as long as they were equally applied to other “non-essential” entities,” the Epoch Times explained. “Chief Justice John Roberts wrote for the majority in defending broad state authority in public health matters.”

“Mayor Curtatone’s restrictions on churches would prevent even Jesus and the twelve disciples from lawfully gathering in Somerville,” commented Jeremy Dys, Special Counsel for Litigation and Communications for First Liberty Institute. “If thousands of people can peacefully protest in the streets under the First Amendment, certainly churches are able to safely resume in-person religious gatherings.”

In a win for pro-life activists, the New York Times reports:

Connecticut’s top health official on Tuesday ordered hospitals that were barring visitors because of the coronavirus to make exceptions for patients with disabilities, after a complaint that the policy violated the civil rights of people who were unable to obtain adequate care for themselves.

A family member or care provider, the order says, may now accompany a patient who has a mental, intellectual or physical impairment and requires special assistance.

The change came after disability groups filed a complaint with the federal Office for Civil Rights, part of the Department of Health and Human Services, saying that the lack of visitation rights deprived some patients “of their right to make informed decisions and provide informed consent,” and subjected others “to the unnecessary use of physical and chemical restraints.”