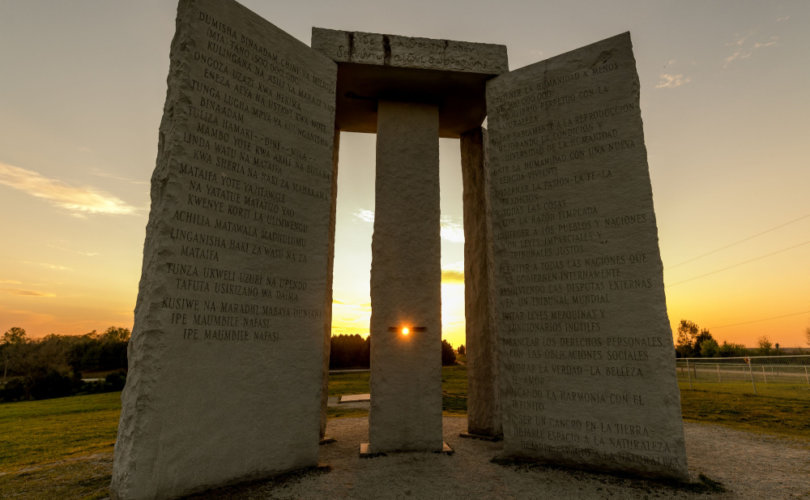 UPDATE: The Georgia Bureau of Investigation announced after publication of this article that the monument was “completely demolished” for “safety reasons” on the evening of July 6.

ELBERTON, Georgia (LifeSiteNews) — The “Georgia Guidestones” monument, which has drawn criticism for its anti-life inscriptions about population control and references to humans being a “cancer on the Earth,” was partially destroyed by an explosion on Wednesday.

“Investigators said unknown people detonated an explosive device at around 4 a.m.,” reported Fox 5 Atlanta, adding that no one was injured in the incident.

Footage of the aftermath shows rubble surrounding the now-battered monument, with one of the four pillars of the structure completely missing.

Christopher Kubas, executive vice president of the Elberton Granite Association whose organization is in part tasked with the preservation of the controversial monument, told Fox 5 Atlanta that the Guidestones have long been the target of vandals due to the messages inscribed on the stones that many deem “offensive.”

Included in the inscriptions are: a call for the creation of a “world court;” a demand that humans “be not a cancer on the Earth;” a command to “guide reproduction wisely;” the imposition of a form of governance that “balance[s] personal rights with social duties;” as well as a dictate advocating for keeping the human population “under 500 million.”

The monument was first erected in Elberton in 1980 on behalf of a “small group of loyal Americans” whose identities have never been confirmed, which has only added to the controversy.

Despite the anonymity of the backers and the mystery surrounding the structure’s origin, there is a long-standing rumor that CNN founder and notorious population-control advocate Ted Turner is one of the central figures involved in the creation of the monument.

In addition to the phrases,- which are written in a series of languages, the monument also features a sundial and a “capstone on top” that is “astronomically aligned with the north star.”

Due to the monument’s propensity for attracting vandals, since 2014 the Georgia Guidestones have been under 24/7 video surveillance.