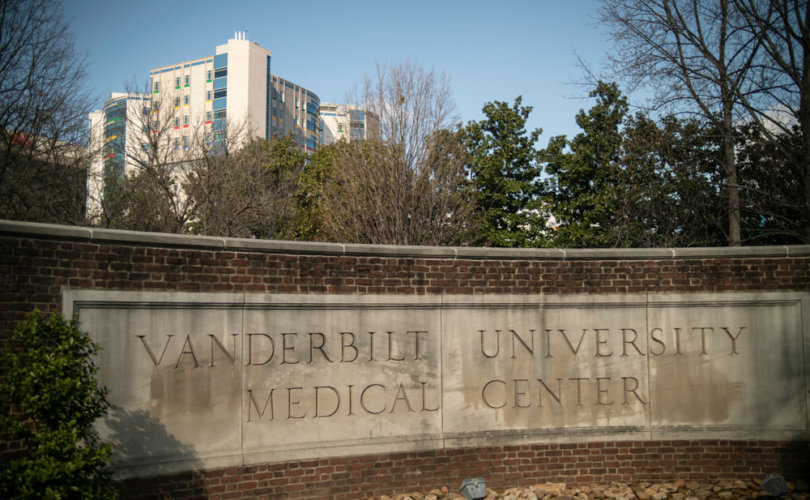 NASHVILLE (LifeSiteNews) – Vanderbilt University Medical Center promoted mutilating “gender transitions” for minors as a “huge money maker” and saw moral objections to participating in the practice as a problem to be punished, according to explosive video uncovered by The Daily Wire’s Matt Walsh.

On Tuesday, Walsh published a Twitter thread highlighting his findings about Vanderbilt’s transgender clinic in Nashville that has seen children as young as 13, the details of which were then compiled and elaborated upon in a Daily Wire report.

BREAKING: My team and I have been investigating the transgender clinic at Vanderbilt here in Nashville. Vanderbilt drugs, chemically castrates, and performs double mastectomies on minors. But it gets worse. Here is what we found. Let's start at the beginning.

Vanderbilt was apparently concerned that not all of its staff would be on board. Dr. Ellen Clayton warned that "conscientious objections" are "problematic." Anyone who decides not to be involved in transition surgeries due to "religious beliefs" will face "consequences" pic.twitter.com/CgNicrG4Mg

After they have drugged and sterilized the kids, Vanderbilt — as explained in this video presentation by plastic surgeon Julien Winocour and Physician’s Assistant Shalyn Vanderbloemen — will happily perform double mastectomies on adolescent girls. pic.twitter.com/SRvtytflsk

They now castrate, sterilize, and mutilate minors as well as adults, while apparently taking steps to hide this activity from the public view.

This is what "health care" has become in modern America.

The thread starts with a video of Dr. Shayne Sebold Taylor, a physician with VUMC’s Clinic for Transgender Health, promoting male-to-female and female-to-male surgical procedures as hugely lucrative for hospitals.

“These surgeries make a lot of money,” she said, noting that “chest reconstruction” can mean $40,000 per patient, and vaginoplasties well over $20,000. “These surgeries are labor intensive, there are a lot of follow-ups, they require a lot of our time, and they make money.”

In another video, Vanderbilt Law School professor of pediatrics, law, and health policy Ellen Wright Clayton bemoaning health professionals’ aversion to such practices, and that they should be unwelcome at the university.

“If you are going to assert conscientious objection, you have to realize that that is problematic,” she said. “You are doing something to another person, and you are not paying the cost for your belief. I think that is a […] real issue.”

In an apparent effort to dissuade and intimidate dissension, Vanderbilt instituted a program called “Trans Buddies,” under which a “buddy” would sit in on appointments to ensure physicians were sufficiently deferential to gender-fluid orthodoxy such as respecting “preferred pronouns,” all in the name of safety.

Following the report, VMUC deleted the transgender clinic’s website (though Walsh assured readers that his team preserved the relevant material), and issued a statement claiming the report “misrepresent[s] facts” and stressing that all procedures were done with parental consent and insisting employees’ conscience rights are respected, but not refuting any of the specific details of the report.

Don’t worry, we knew this would happen and have spent the past week saving videos and screenshots. We have it all. They can’t hide it now.

Vanderbilt has issued a statement in response to our investigation. They do not specifically deny anything in my report. Their only defense for drugging and mutilating kids is that their parents allegedly consent to it. That’s all the confirmation you need.

A Vanderbilt spokesperson also told The Daily Signal that VMUC and the university have been separate legal entities since 2016, and as such the school “has no role in medical decisions and patient care.”

The Wire’s exposure of VMUC’s activities has been met with an explosion of outrage from left-wing defenders of “transitioning” minors, who have responded with the now-familiar tactic of claiming that to report on controversial left-wing activities is inherently dangerous:

Matt Walsh is off the rails and he is behaving dangerously. I reviewed his posts just from today and he is going to get people hurt and/or killed.

I reported the posts, but that hardly feels like enough. @FBI https://t.co/ePNlsGucup

Vanderbilt medical center has had to shift medical appointments for its trans clinic to virtual telehealth appointments as a result of threats being made. Matt Walsh is inciting a terror campaign against a hospital and disrupting care. He will get people hurt or killed.

“The ‘pediatric transgender clinic’ at Vanderbilt University Medical Center raises serious moral, ethical and legal concerns,” Tennessee’s Republican Gov. Bill Lee told The Daily Wire in response to the news. “We should not allow permanent, life-altering decisions that hurt children or policies that suppress religious liberties, all for the purpose of financial gain. We have to protect Tennessee children, and this warrants a thorough investigation.”