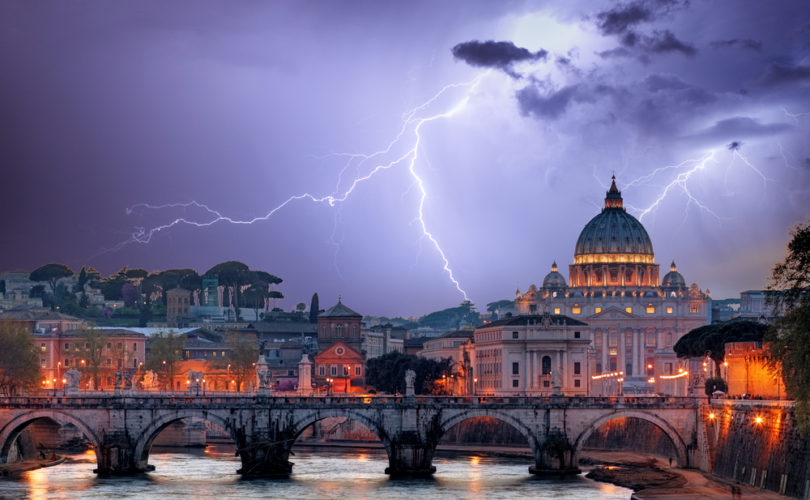 September 10, 2015 (LifeSiteNews) — The first hard-hitting words by orthodox cardinals and archbishops about the “current crisis” in the Catholic Church have been sounded. Previous comments by Vatican Cardinal Raymond Burke have been more guarded but as the Synod nears, the reality of a looming schism in the Church has pushed him and other Church leaders to a painful willingness to be frank in publicly warning about the seriousness of what is facing the Church.

Speaking to the idea proposed in the mid-term report of the 2014 Extraordinary Synod on the Family and repeated by various bishops’ conferences, he says, “It is heresy to teach that homosexual relations are not disordinate or are not disordered or have positive elements.”

The comments come in a newly released video by the Polish publication Polonia Christiana called Crisis in the Church. In addition to Cardinal Burke, the video features Archbishop Jan Pawel Lenga, who takes aim at Cardinal Reinhard Marx, president of the German bishops conference and one of Pope Francis’ Council of Nine advisors. Speaking of Marx’s acceptance of communion for remarried divorcees and his statement that the Church in Germany “is not a subsidiary of Rome,” Archbishop Lenga said, “There was Marx, Karl Marx. And if present Marx says similar things, then there is no real difference.”

Lenga, the emeritus archbishop of Karaganda, Kazakhstan, added that if the Church in Germany thinks they are so superior, “it’s some kind of Phantom, we should chase it away by the sign of the Cross.”

“The Pope during the Synod will show whose side he is on,” said Archbishop Lenga. “If he accepts the statement of those who want to distribute Holy Communion to the divorced, there would be a heresy in the Church, and if he does not accept, there could be a schism in the Church.”

Lenga concluded, “Either we are on the side of Christ, or on the side of the devil. There is no third option. The common people are sometimes closer to Christ than priests.”

Athanasius Schneider, auxiliary bishop of Astana, Kazakhstan, who has been a spokesman for orthodoxy during the Synod crisis like few others in the hierarchy, says we are “already living in the time of schism” and points directly at Cardinal Walter Kasper as one of the main culprits. “These false words will be revealed,” he says. “Christ said all that is hidden will be revealed and these strategies of Cardinal Kasper and his group will be revealed as a lie, a strategy that is against the spirit of Christ and the apostles.”

Cardinal Burke concurs that “we’re in a time of crisis within the church,” suggesting that “we may have to give our all (including our very lives) to safeguard and promote the truth of the faith not only for ourselves and our own generation but also for those to come.”

Burke is blunt about the current state of the Church confronting heretical positions coming from those high up in its leadership. “If this means that Cardinals will be opposed to Cardinals then we simply have to accept the fact that that's the situation in which we find ourselves,” he said. “Certainly for my part I don’t look for this kind of conflict but in defending the truth of the faith I end up in a disagreement or conflict with another conflict. What has to be primary to me is the truth of the faith.”