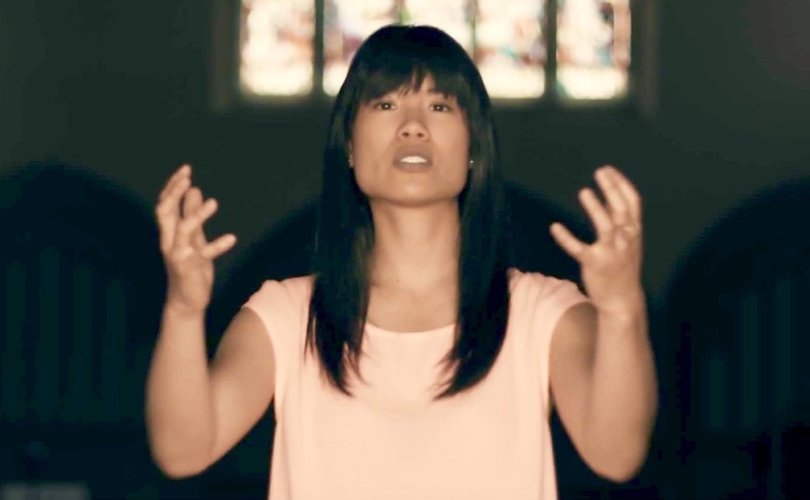 'Gay and christian' activist Jenna Tenn-Yuk in a screen grab from a word poetry film.

TORONTO, July 8, 2016 (LifeSiteNews) — A woman who describes herself as “gay and Christian” and who says that the Catholic Church is a place of “entrenched homophobia” has been giving keynote addresses in Toronto Catholic schools. Her message: LGBTQ individuals need to “live their truths,” same-sex activity is “love,” and Jesus likely hung out with “lots of queers and gays.”

Homosexual activist Jenna Tenn-Yuk writes on her blog that she has been working within Toronto’s Catholic board for quite some time. Last May, she gave the keynote presentation during a “Health and Wellness Day” held at the all-girls Loretto College School. Tenn-Yuk wrote on her blog how she almost “couldn’t believe” how welcoming the Catholic school was, adding that such welcome could only help Catholic girls who “identify on the LGBTQ+ spectrum” and who are thinking about coming “out.”

Tenn-Yuk wrote on her blog that she shared with about 500 girls during her presentation some of her own spoken word poetry on the topic of “coming out” as gay.

In one poem called “I Don’t Hate the Sinner, I Hate the Sin” Tenn-Yuk speaks about it being a “shame that same-sex love is somehow reduced to a lifestyle and not simply love.”

At one point in the poem, she mentions how she often fought against those who argued about the “Bible being against homosexuality, or marriage is for a man and a woman.”

“Jesus never measured sin. Never mentioned being gay, hanging out with the most marginalized people in his day, probably, including, lots of queers and gays,” she says at one point.

During the same school event, Tenn-Yuk told students that “GSAs are so crucial to help LGBTQ+ students know it’s possible to live their truths.” The event concluded with students being asked to sign a rainbow flag to show solidarity with classmates who say they are LGBTQ.

Wonderful to see support for #LGBTQ+ students at @LCSMadness! Some reflections on last week: https://t.co/dXGuTHEjqw pic.twitter.com/M7gxeS4Uyh

The Catholic Church holds that God created humans as male and female and called them to join together in marriage to create new life for the Kingdom of God. The Church teaches that homosexual acts are “intrinsically disordered” and acts of “grave depravity” since they “close the sexual act to the gift of life.”

“They do not proceed from a genuine affectivity and sexual complementarity. Under no circumstances can they be approved,” states the Catechism of the Catholic Church, adding that men and women who have deep-seated homosexual tendencies are to be “accepted with respect, compassion, and sensitivity,” the Church teaches.

Jeff Gunnarson, vice president of Campaign Life Coalition, told LifeSiteNews that Catholic children who hear the activist's message could be set up for a “life of misery and bondage.”

“This gay activist could be responsible for the potential moral and spiritual breakdown of numerous Catholic children within the Toronto Board. It is easy to discover from those who have lived and rejected the homosexual lifestyle just how devastating physically and spiritually it is to those who engage in it. And now Catholic children are being lied to about these dangers and are potentially being set up for a life of misery and bondage.”

“This is more than sad. It is unacceptable intentional sabotage,” he said.

Tanya Granic Allen, president of Parents As First Educators, told LifeSiteNews that the Toronto Catholic District School Board (TCDSB) must “immediately suspend” the activist from giving presentations in Catholic schools.

“Catholic parents will be scandalized when they find out that their children are being subjected to ideological propaganda that runs counter to Catholic teaching. Parents make a conscious choice to send their children to Catholic schools to receive Catholic education — which is constitutionally protected — intending that they will be taught genuine Catholic faith, morals, and values.”

“It is duplicitous behavior towards parents for the board to allow such a speaker, for parents believe their children receive authentic Catholic execution when they send them to Catholic schools,” she said.

Tenn-Yuk makes no efforts to hide from the public eye what she actually thinks about the Catholic Church.

In a 2014 Huffington Post article Tenn-Yuk called the Catholic Church a place of “entrenched homophobia” that offers “shame and self-hatred” to LGBTQ students in Catholic boards. In a blog post from the same year she wrote that she hopes for change in “the church” regarding the LGBTQ issue, adding that she “couldn’t do this work if I didn’t have hope” for change.

In a 2012 entry on her blog she mentions how she attended a homosexual “wedding,” stating that after the two men were announced as “husbands” she “fought back tears.”

Tenn-Yuk, who is also a champion of all-gender bathrooms, change rooms, and sports teams, says that she does “a lot of work with Catholic schools in Toronto” and enjoys being able to “talk about the complexities and nuances of how it’s not black and white—there is so much gray.”

Tenn-Yuk did not respond to LifeSiteNews’ numerous requests for an interview.

When LifeSiteNews contacted the Archdiocese of Toronto to ask about its policy on speakers in Catholic schools who address the topics of homosexuality and LGTBQ issues, communications director Neil MacCarthy declined to comment and instead suggested contacting the School Board. LifeSiteNews contacted the Toronto Catholic District School Board for comment, but did not receive a reply.

But Granic Allen called it “abhorrent” for the TCDSB to invite and promote Tenn-Yuk “with her ideology that smacks in the face of Catholic teaching.”

“What on earth is a Catholic board doing having someone like this come and form young Catholics?” she said.

LifeSiteNews encourages readers to ensure communications are respectful, out of charity and for full effectiveness.