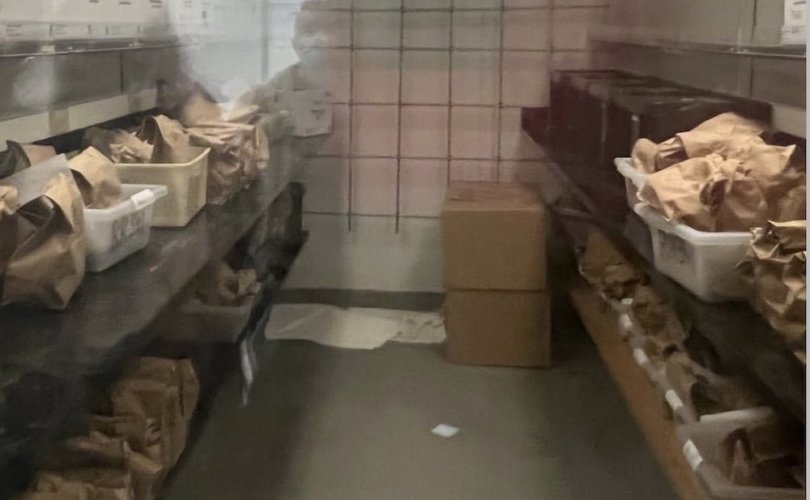 SEATTLE (LifeSiteNews) – A coalition of pro-life organizations located and photographed a freezer containing the remains of aborted babies at the University of Washington, shedding additional light on the university’s ongoing sale of and experimentation on fetal tissue derived from abortions.

Progressive Anti-Abortion Uprising (PAAU) issued a press release Wednesday detailing how it, Survivors of the Abortion Holocaust, Pro-Life San Francisco, and Rehumanize International located the freezer at the university’s Seattle campus “by examining invoices previously exposed via public records requests by Indiana Right to Life.” The photo shows rows of bags containing aborted fetal bodies and body parts, according to the press release.

most active fetal organ bank in the nation located at the University of Washington in Seattle.

This photograph of the freezer, taken on March 9th, shows the rows of bodies and parts labeled and kept in bags.

Just an hour before this photo was taken, these same activists pic.twitter.com/JEV9Ohm0u5

While UW continues to distribute and traffic the body parts and whole cadavers of unborn children at a rate that surpasses any other known institution in the United States, activists were able to locate the freezer, pic.twitter.com/lOGciVx48n

As previously covered by LifeSiteNews, the University of Washington has for years fought in court to keep the details of its fetal tissue activities out of the public eye.

The legal battle began when investigative journalist David Daleiden requested documents from the school’s taxpayer-funded Birth Defects Research Laboratory about trafficking in aborted fetal parts and organs. The public information request was met with a lawsuit from staff of Planned Parenthood and other abortion centers, along with researchers and others, to force heavy redaction of these government documents.

“The reality that fetal organ harvesting is happening here in Seattle is heinous,” said Seattle-based PAAU organizer Kristin Monahan. “These are our fellow community members whose body parts are being trafficked when they are much too young to understand what is happening. These practices have a depressing effect on the adult family members and our community as a whole. I want better for my friends and peers, and their children alike.”

“Despite how their traffickers choose to price their body parts, we know that these children’s worth is infinite and inherent,” added Herb Geraghty, executive director of Rehumanize International. “They should not be killed so that researchers can receive more taxpayer funding for their experiments and private companies like Advanced Bioscience Resources can endlessly profit from the cruelty. It is only by exposing these unethical practices to the public and the media that we can hope to end them.”

The sale of aborted fetal remains for research and experimentation first came to the political forefront in 2015, when Daleiden’s group Center for Medical Progress (CMP) began releasing undercover videos of meetings with Planned Parenthood and National Abortion Federation personnel detailing the practice, which set off a firestorm of controversy and a string of revelations about the abortion industry breaking multiple federal laws against profiting off human tissue, altering abortion procedures for the sake of procuring better tissue samples, and potentially even committing partial-birth abortions or infanticide; as well as video examples of abortion workers displaying callousness toward the humanity of the children their work killed.

The story first broke late in the second term of pro-abortion former President Barack Obama, meaning the abortion industry didn’t have to worry about a federal investigation. Late in 2017, the Justice Department under pro-life former President Donald Trump requested documents from the U.S. Senate Judiciary Committee’s review of the case, which led many pro-lifers to hope Planned Parenthood would finally face justice. But no charges were ever brought, despite 67 members of Congress writing to the Trump administration in June 2019, demanding to know why no publicly-known actions had been taken since 2017.