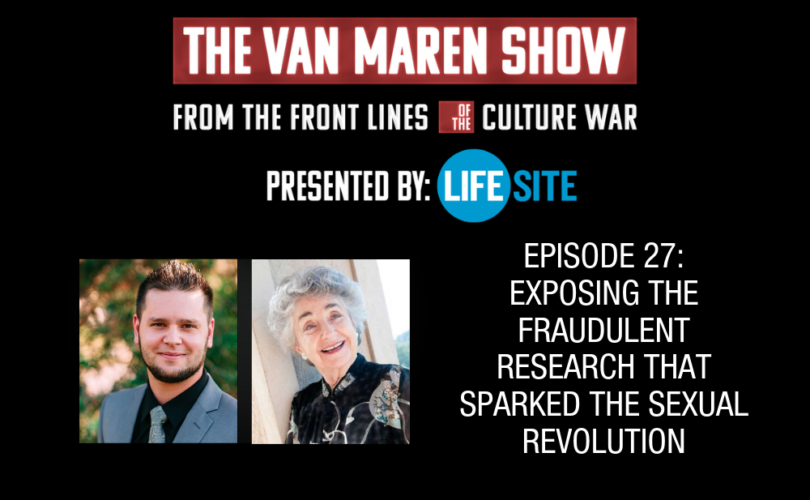 July 24, 2019 (LifeSiteNews) – In this week’s episode of The Van Maren Show, Jonathon Van Maren speaks with Dr. Judith Reisman, a research professor at Liberty University School of Law and Director of the Child Protection Institute. Dr. Reisman is a giant in the science and sexology community with many accolades and accomplishments. Today, he speaks with Reisman about her pioneering work in exposing the fraudulent sex ‘research’ work of Dr. Alfred Kinsey.

For those unfamiliar, Dr. Kinsley’s science played a role in bringing the sexual revolution to America, in modern LGBT laws, inflated LGBT propaganda statistics, and in a way responsible for the overall acceptance of the LGBT movement. You can read more about Dr. Kinsey by searching for him in the LifeSiteNews.com search bar.

Dr. Reisman got into this work in an effort to gain understanding after her own daughter was sexually abused by the boy upstairs. In her journey, she dove into the link between pornography and child sexualization, something most people don’t realize are related. As airbrushing of pornography increased, the images being created resembled the features of a teenager and a grown woman combined. This ‘idealized’ image and the prevenlance of pseudo children pornography blurred the boundaries between adult and child bodies.

As they continue with the interview, Van Maren and Reisman dive into the research and impacts of Dr. Alfred Kinsey. Dr. Kinsey wrote two wildly popular books, Sexual Behavior in the Human Male and Sexual Behavior in the Human Female. At the time, these books were marketed as the behind the scenes look at what everyone was doing sexually, but no one wanted to talk about. The claim was that no one was actually following Judeo-Christian standards; that 10% of the population was homoseuxal, that 69% of men used prostitutes, and that 84% of single women aborted their children. These books effectively normalized for all of society the behavior of the abnormal sexual deviant and sparked the sexual revolution.

Many accepted Kinsey’s bunk research and saw it as liberty to pursue such behaviors and to change laws. Dr. Reisman speaks about the fallacies and biases in Kinsey’s research, including his own twisted personal background and behavior. She also delves into the political motives and movements that supported the spread of Kinsey’s research. There were many changes to moral penal code made based on Kinsey’s research that allowed for the spread of deviant sexual behavior.

Dr. Reisman also discussed the pushback she has received in publishing and publicizing her findings on Kinsey’s research. The Kinsey Foundation threatened to sue CNN for allowing Reisman to speak about her findings and she is rarely invited to speak, even at anti-pornorgraphy conferences and universities. The political power that supported Kinsey and the rapid spread of the sexual revolution lives on even today.

You won’t want to miss this episode, it is jam packed with little known, but very important information on the rise of the sexual revolution.