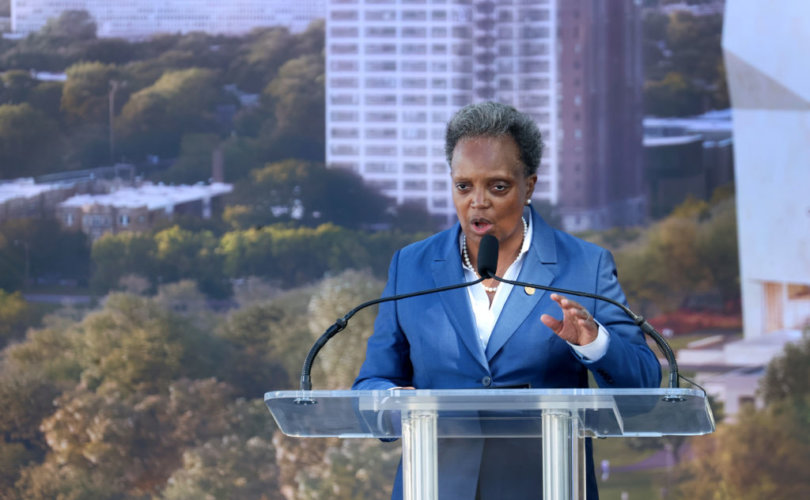 Lightfoot made the comments while blasting the U.S. Supreme Court’s Friday decision in Dobbs v. Jackson Women’s Health Organization, in which the Court upheld Mississippi’s right to limit abortion by overruling both Roe v. Wade (1973) and Planned Parenthood v. Casey (1992).

The Court ruled 6-3 to uphold Mississippi’s right to regulate abortion, and 5-4 to overturn Roe and Casey. Roe v. Wade had established a federal “right to abortion” throughout all 50 states. The rollback of Roe has once again returned the authority to regulate abortion back to elected representatives within individual states.

In a concurring opinion, Justice Thomas argued that in addition to overturning the “constitutional right to abortion” established in Roe v. Wade, the Court should also reconsider “all of this Court’s substantive due process precedents, including Griswold, Lawrence, and Obergefell.”

The decisions cited by Thomas had decreed that the U.S. Constitution provides protections for contraception, prevents criminal punishment for sodomy, and permits legal homosexual “marriage.”

At a Chicago LGBT “pride” event over the weekend, Lightfoot, a lesbian, attacked Thomas for advocating the overhaul of precedents which many conservatives believe have had a deleterious impact on the social fabric of the U.S.

“If you read Clarence Thomas’ concurrence …  f*** Clarence Thomas,” Lightfoot said. “If he thinks we are going to stand idly by while they take our rights…”

The lesbian mayor also argued that “we will not live in a world” in which abortion “rights” are “rolled back.”

Chicago’s mayor is not alone among Democratic politicians in expressing rage and defiance in response to the Supreme Court’s crucial pro-life ruling, which has already enabled myriad Republican-led states to enact full or partial abortion bans within their borders.

Speaker of the House Nancy Pelosi, a self-professed Catholic, asserted that “the radical Supreme Court is eviscerating Americans’ rights and endangering their health and safety.”

According to Pelosi, by securing protections for the unborn through returning regulation of abortion to the states, conservatives have “achieved their dark, extreme goal of ripping away a woman’s right to make their own reproductive health decisions.”

READ: Pelosi: Supreme Court is ‘ripping away a woman’s right to make her own reproductive health decision’

In contrast, former Republican President Donald Trump told Fox News that the decision in Dobbs “brings everything back to the states where it has always belonged.”

“This is following the Constitution, and giving rights back when they should have been given long ago,” Trump said, arguing that ultimately, “God made the decision.”