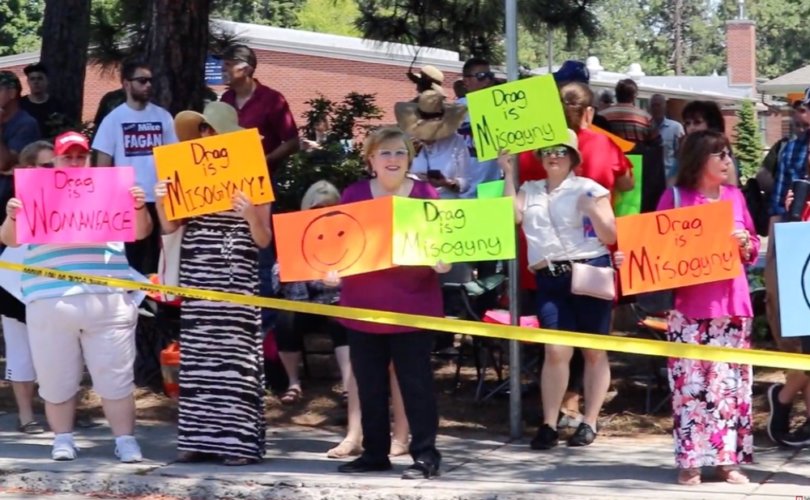 SPOKANE, Washington, June 3, 2020 (LifeSiteNews) ― A Facebook group started by a woman dedicated to ending Drag Queen Story Hour was kicked off Facebook this week for the third time.

Anna Hall Bohach, founder of 500 Mom Strong, told LifeSiteNews yesterday that the grassroots group’s Facebook page was removed on Monday, June 1 because it was deemed “transphobic,” just like the other 500 Mom Strong pages Facebook had previously removed. The first page, also called 500 Mom Strong, disappeared last July 19. The second, 500 Mom Stronger, was taken down this February.

“The pages were very effective at getting our message out,” Bohach said.

“We had a large reach with a lot of traffic on our pages.”

The first page had over 2000 followers and 1000 likes. The second and third pages had about the same number of followers, Bohach said, only with 750 and then 440 likes.

The pages received many comments and shares, she added. The organizer said that most comments were positive, but that there were also trolls who would leave negative comments.

[DQSH]  is misogyny,” she wrote. “Drag queens are very offensive to women. They are grotesque hypersexualized caricatures of women. They mock women and debase our womanhood and femininity. A drag queen is no different than a racist donning black face.”

Since then, Bohach reports, the group has had a fruitful year, receiving news coverage, thanks even to their fiercest critics.

“The drag queens we protested hosted a Drag Show fundraiser and slave style auction for Planned Parenthood using effigies of [me], the pastor who was arrested at the Drag Queen Story Hour, Afshin Yaghtin, and Pastor Ken Peters who leads The Church at Planned Parenthood,” she told LifeSiteNews.

“[The Church] pray and sing outside Planned Parenthood to end abortion, and [they] also support 500 Mom Strong.”

500 Mom Strong has also helped other groups in different states and in Canada to organize protests against Drag Queen Story Hours. This, however, has also been censored by the social media giant.

“We did a book review video of the books being read to kids at the libraries for DQSH,” Bohach recalled. “That had over 24,000 shares, but it too was removed by Facebook.”

The group has also been campaigning against the sex education program created by Planned Parenthood that is being taught in public schools across the USA.

A company spokesperson for Facebook told LifeSiteNews yesterday that the third 500 Mom Strong page was “taken down for violating our Community Standards.”

Facebook indicated that it has policies to deal with people who repeatedly violate its standards and that there are a number of activities that it looks out for to identify habitual violators.

Bohach told LifeSiteNews that she thought it was hypocritical for Facebook to remove 500 Mom Strong’s page while allowing copycat group 500 Drag Queen Strong to post support for Antifa.

Antifa has been implicated in sparking riots across the United States under cover of protests about the death of an African American man at the hands of a Minneapolis police officer. In response, American president Donald Trump announced over another social media platform, Twitter, that the United States would be “designating Antifa as a terrorist organization.”