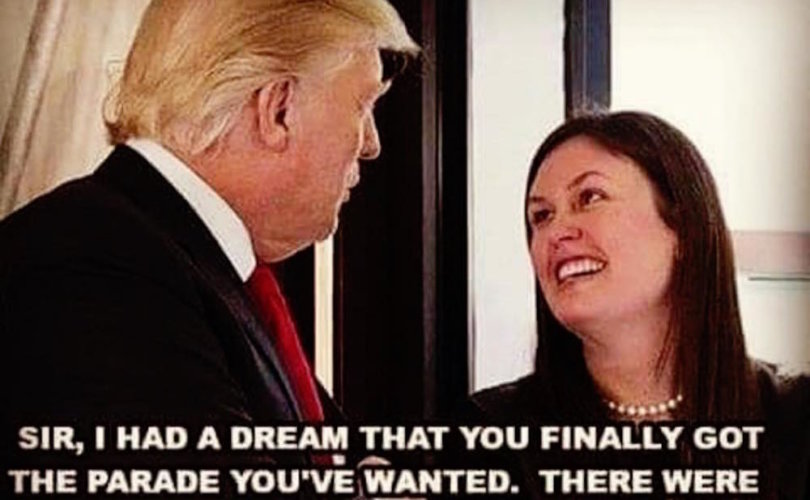 May 3, 2019 (LifeSiteNews) – Almost every week brings a new case of Facebook restricting center-right content on false charges of “hate” or “fake news,” but a prominent left-wing page recently got away with posting a “joke” that fantasizes about President Donald Trump being dead.

On April 28, the left-wing Facebook group Occupy Democrats posted a joke in which Press Secretary Sarah Huckabee Sanders tells the president she “had a dream that you finally got the parade you’ve wanted,” complete with “millions of people lining the streets waving and cheering as you passed by in a large, black limo.”

“Was I smiling, Sarah?” Trump asks, to which Huckabee Sanders answers, “I don’t know, sir, the lid on the casket was closed.”

Occupy Democrats is a filth based leftist propaganda site that @facebook rewards with tens of millions of engagements.

Here is one of their top posts of the week where they celebrate the hypothetical death of President Trump.

Why are conservatives being banned for far less? pic.twitter.com/QcQPgPHlC3

The post is still up as of May 3, having amassed approximately 37,000 likes and 17,000 shares. Numerous commenters made the presidential death fantasy even more overt. “Cremation is to [sic] good for him,” one said. “Just leave him on the ground ….then again the worms wouldn't eat him.” Another called it a “wonderful dream,” while a third imagined, “his head must've exploded,hence the closed casket [sic]. Hope they caught it on film. Would love to see that.”

Breitbart notes that one of the president’s sons, Donald Trump Jr., responded by calling the “joke’s” posters and fans “truly sick people,” and that Trump Jr. is the subject of another recent example demonstrating the social media giant’s double-standards.

Trump Jr. says that last month, the Facebook-owned Instagram deleted a post of Army veteran Omar Avila posing with him for a photo, for an unspecified violation of the site’s “standards.”

“I opened up my stuff, I was looking at my account and I noticed it had been taken down and I got that little screenshot you get that says that your post violated Instagram guidelines,” Avila said. “Again, I don’t know why, it had nothing on it that was political or that said anything derogatory.”

The incident is only the latest in the ongoing controversy over Facebook’s inconsistent treatment of political content. The social network recently came under fire for blocking objective informational links about abortion from the American Pregnancy Association’s website and criticism of a Canadian coin to celebrate homosexuality, as well as flagging accurate reporting about a controversial history textbook as false. In March, a Project Veritas investigation detailed how Facebook “deboosts” traffic to several mainstream conservative sites.