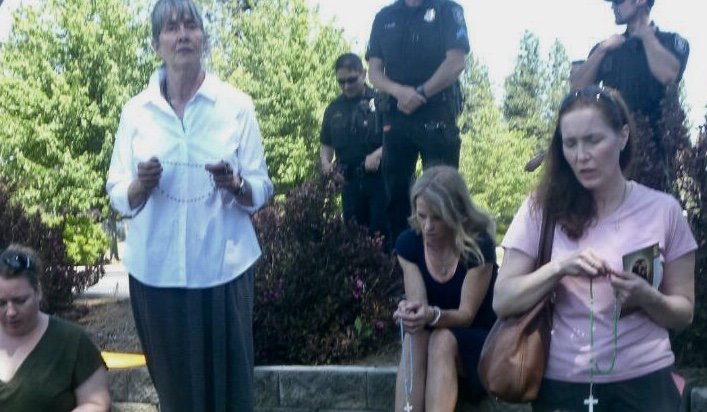 500 Strong Moms pray the rosary while police stand guard behind them outside a Drag Queen Story Hour.Facebook

Anna Hall Bohach, founder of 500 Mom Strong, told LifeSiteNews over the phone that the group’s Facebook page was removed on Sunday after she received a final warning.

Bohach’s offending posts included a placard saying “women don’t have to be polite to someone who makes them feel uncomfortable” and a message expressing sympathy with Andy Ngo, the conservative reporter hospitalized after being attacked by members of the far-left anarchist group Antifa.

The mother of four also expressed her disgust with a man who complained that his wife breastfeeds better than he can and posted that the word for “a woman who cut off her breasts and got pregnant by a man who had breast implants” was “insanity.” In addition, Bohach addressed a man who identifies as a woman as “a freaking pervert” near the end of a post explaining that womanhood is more than liking to “wear dresses and make-up.”

This is strong stuff, but Bohach says Facebook has not taken down hate-filled posts against her, including a fake Facebook account that was founded in the name “Annie Bohach Hall” and describes her as “a rage-filled bigot … desperately trying to keep myself relevant.”

Bohach told LifeSiteNews that her opponents have also been sending “pornography” to her archdiocese and her parish church.

“I don’t know how they found out it was my parish,” she said.

The 500 Mom Strong founder has fought back by establishing a new Facebook page, this one called “500 Mom Stronger.” She has also founded a website, 500momstrong.org, as a resource for those who want to protest the appearance of Drag Queen Story Hours at their own local public libraries and also counter the transgender movement.

“We’re working with about 20 groups now,” she said.

Bohach added that she will be meeting with Congresswoman Cathy McMorris Rodgers in Spokane on Friday about her Facebook adventures. McMorris Rodgers questioned Facebook CEO Mark Zuckerburg about its anti-conservative bias at Congressional hearings in April.

500 Mom Strong made headlines in June when it held its first rally protesting a Drag Queen Story Hour (DQSH) in Spokane. Bohach and her supporters were greeted by screaming men dressed as women and a strong police presence, including snipers. A second rally outside another Spokane DQSH was met with similar opposition, including the District Marshal, Bohach told LifeSiteNews.