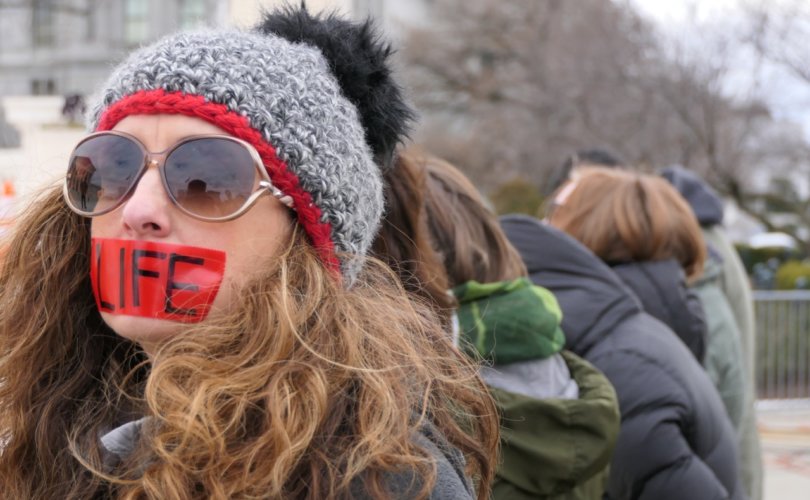 January 18, 2018 (LifeSiteNews) – Exceptional talent from the worlds of Hollywood and pro-life activism have joined forces with the goal of producing a film chronicling the little-known true story behind the 1973 U.S. abortion ruling Roe v Wade.

“We need your support now more than ever. Facebook has banned us from inviting friends to 'Like' our page and from 'Sharing' our PAID ads,” the film's creators' state.

Princeton Professor Robert George reacted in a FaceBook posting, saying, “Given Facebook's claims to be a neutral, open forum for the discussion of important issues, I regard this as scandalous and I call on Facebook to cease and desist.”

Roe v Wade the Movie aims to tell “the real untold story of how people lied; how the media lied; and how the courts were manipulated to pass a law that has since killed over 60 million Americans,” according to the film’s fundraising website. “Many documentaries have been made, but no one has had the courage to make an actual feature film, a theatrical movie about the true story.”

“We are launching this campaign for the most important pro-life movie in history,” continues the website.  “This will be the first movie ever about the true story of ROE v. WADE, the most famous court case in America that legalized Abortion.”

Alveda King, in a promotional video about the movie, explains, “This big screen movie is the real untold story of how mountains of lies led to an injustice that has deprived millions of people of human dignity and human rights.”

Loeb and others are exploring legal recourse to the Facebook blockade, which is preventing fundraising during the crucial first days after the movie has been announced.

Roe v Wade the Movie begins with founder of Planned Parenthood, Margaret Sanger delivering a speech to the KKK, stating her intention to reduce the growth of the African American population.

The movie shows how abortionist Dr. Bernard Nathanson and feminist Betty Friedan were enlisted in the effort, and how a poor girl with a 10th-grade education, Norma McCorvey, aka, Jane Roe, was manipulated as a pawn for the purposes of the abortion movement.

Roe v Wade the Movie details how fake polls and fake statistics were fed to the media, and how Hollywood joined in the effort by producing movies and TV shows with pro-abortion themes.

The film’s protagonist is Mildred Jefferson, the first African American woman to graduate from Harvard Medical School.  “She believed that she became a doctor to protect life, not destroy it,” explains the movie’s website.  “Not only was she trying to save lives, she was trying to save her race.”

Most people don’t know that “the very people who spent their lives fighting to legalize abortion, were faced with the harsh consequences soon after,” states the website.  “At the end of the movie Bernard, through the help of new sonogram technology, realizes he is killing babies, confesses to all the lies and becomes a leading activist in the pro life movement. Even Norma, our Jane Roe, realizes she was manipulated and becomes a leading activist to protect life.”

Co-producer Nick Loeb may seem as a surprise driving force behind this project, due to his long-standing court battle to protect two frozen embryos he created with former fiancée, actress Sofía Vergara, star of the popular Modern Family TV show.

“As I’ve read the history of the abortion movement — more than 40 books — and educated myself on how it works and seen all the pictures … all have made me more adamant to protect life.”

“This has been a real journey for me and now I hope I can educate others,” continued Loeb.  “Some who have been pro-choice have read my screenplay and have changed their minds on the topic … especially when they read the part about Dr. Bernard Nathanson.  Some who had always thought what was in the womb was just a glob of cells now understand that this is a human life.”

Loeb went on to say, “I’ve been in the room when a woman has had her first sonogram … and you can hear that heartbeat.  I don’t understand how anyone can think that is not a human life.”

When LifeSiteNews asked if his attitudes toward surrogacy process have changed, Loeb said, “I don’t think we should be freezing embryos…but if you do, you should be required by law to bring them to term or give up for adoption.”

Regarding the problematic aspects of surrogacy, freezing embryos and the so far stalled attempts to bring his daughters to term, Loeb expressed regret but not despair or defeat.  Speaking of his own experience, Loeb said, “Hindsight is 20/20. But now that the mistake has been made, it’s time to rectify.”

Roe v Wade the Movie is Loeb’s attempt to bring about a culture of life, where all unborn children, including his daughters, are born.

“The biggest impact you can have today is thru the pop culture,” Loeb told LifeSiteNews.

“If you want to move the needle,” engaging the public through pop culture is the very best means, especially through “a movie, a feature film that will win hearts and change minds.”

“One thousand movie screens have already been committed,” explains Loeb. “We have a distributor on board.”

Loeb suggested that if everyone who attends the March for Life in Washington, DC this week donates just $5, the project would be fully funded and production could proceed.

“No one has ever made this movie, told this side of the story,” says Loeb. “We need the pro-life community to get together and address the country.”