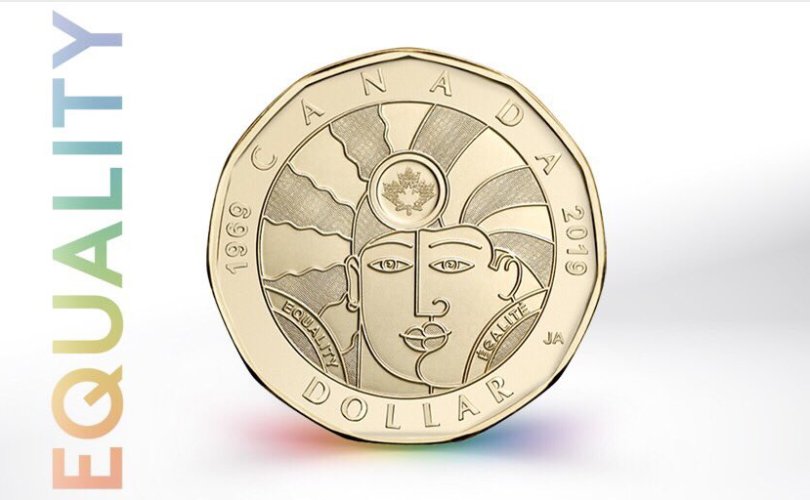 WOODSTOCK, Canada, April 30, 2019 (LifeSiteNews) ― Facebook has banned a post by a Christian citizens’ group protesting the imposition of a coin celebrating homosexuality.

CitizenGO Canada sponsored a petition asking the Royal Canadian Mint not to produce a dollar coin celebrating 2019 as the 50th anniversary of the decriminalization of private homosexual acts in Canada. The design of the “gay loonie,” as it is known, was granted last year by Justin Trudeau’s Liberal government.

After the coin was released into circulation on April 24, Facebook banned the petition on the grounds that it is “hate speech.”

The petition reads as follows:

Canadian Coins Should Not Promote Division

I am very upset over the planned release of a pro-homosexual one dollar coin later this year. I do not want a “gay” loonie.

When Prime Minister Pierre Elliott Trudeau decriminalized homosexual acts in 1969, he famously said, “there's no place for the state in the bedrooms of the nation.” In other words, people's private sexual practices should stay private, and the government should keep out. If that is the case, then why are you promoting certain sexual practices on Canada's official coinage? It is like the government is opening up the doors of certain bedrooms and inviting everyone in to watch. This is unacceptable and un-Canadian.

The fact is that many religious Canadians consider homosexual acts to be sinful – a serious offence to God. Also, numerous non-religious Canadians feel homosexual acts are unnatural or unhealthy – at odds with normal human biological and reproductive functions. Many will feel uncomfortable using or carrying these coins. Some will believe they must reject them entirely. This is sure to widen the current rift in Canadian society and may promote discrimination against traditionally-minded people.

Therefore, I am asking you not to mint a “gay” loonie in 2019. The government must withdraw its plans for any design that celebrates homosexual acts. I do not want homosexuality forced upon me and my country.

On April 24, CitizenGo Canada shared a photograph on its blog of the new design, which shows two masculine faces kissing, and asserted that the coin was “highly offensive to many Canadians, particularly those who are Christian.”

“This is nothing less than an attack on our faith and an affront to our God.”

CitizenGO Canada then encouraged readers to sign the petition, to refuse the coin when offered it, and to use special “Not on my $” stickers they can purchase at a nominal fee from the group.

But then Facebook threw a spanner into the works.

“Apparently it is ‘hate speech’ to disagree with the new design of our one dollar coin on religious grounds. Many Christians (including we here at CitizenGO) are deeply and genuinely offended, and sincerely believe the new design is an attack against God,” the spokesman continued.

“We are not saying anyone should hate, harm, or harass any particular person or group of people. In fact, we advocate ‘speaking the truth in love’ to one and all,” he stressed, quoting St. Paul (Ephesians 4:15).

“However, we are saying it is wrong for the Canadian government (led by Mr. Trudeau) to push and promote the LGBT lifestyle on everyone else, especially in a sexuality-themed coin design that every Canadian will be forced to handle.”

A spokesman for CitizenGO told LifeSiteNews over social media that Facebook is “playing politics.”

“To label our legitimate concerns over the politicization of our money as ‘hate speech’ is beyond belief,” he added.

“This just goes to show that free speech is dead on Facebook. The only hatred I see is in the muzzling of socially conservative voices.”

A Canadian pro-life blog waxed indignant on CitizenGo’s behalf, saying the Facebook ban was an affront to democratic values.

“What is ‘hateful’ with the above statement?” the anonymous Everyday for Life Canada blogger demanded.

“It merely advances an opposing point of view about the coin. (C)ensoring alternative positions from the public square is to control what people think and do. This is a violation of democratic values,” the blogger continued.

The blogger said Everyday for Life Canada’s authors believe that Facebook has made “a terrible mistake” and by taking sides on the issue has shut down debate.

This is not the function of social media,” the blogger asserted.

“It's through debate and elections that Canadians should decide public policies and laws, not Facebook. We ask that Facebook immediately reconsider its horrible decision to ban the CitizenGo post and stop acting as public censor.”

On April 12, CitizenGO held a peaceful rally outside the Royal Canadian Mint to protest the proposed coin and reported that it attracted about a dozen supporters.