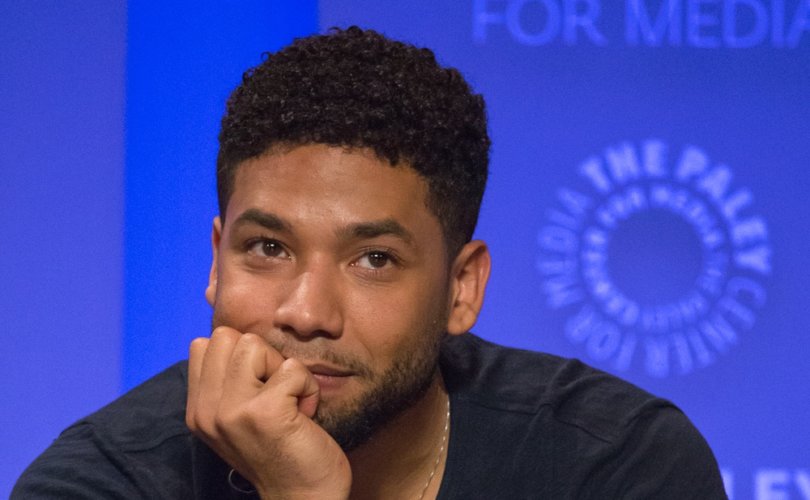 CHICAGO, February 18, 2019 (LifeSiteNews) – As more and more observers arrive at the conclusion that Empire actor Jussie Smollett likely staged an assault against himself to blame on bigoted Trump supporters, Facebook temporarily blocked a post by The Benedict Option author Rod Dreher labeling the incident a “hate hoax.”

The 36-year-old, openly-homosexual actor says he was assaulted in Chicago on January 29, with two masked men allegedly shouting racial and homophobic epithets, beating him to the point of fracturing a rib, putting a rope around his neck, and pouring bleach on him. “This is MAGA country,” they allegedly yelled while leaving, a reference to President Donald Trump’s “Make America Great Again” slogan.

Numerous Democrats, liberal media figures, and Smollett himself aggressively pushed the narrative that the incident was part of a wave of hate for which the president was ultimately to blame. But critics immediately questioned the likelihood of violent Trump supporters roaming around the streets of strongly-Democratic Chicago.

Those suspicions intensified after police failed to find video of the attack among hundreds of hours of footage from cameras near where the actor says it happened, and Smollett only gave police “limited and redacted” phone records they say aren’t enough for a criminal investigation.

On Saturday, The American Conservative published a post by Dreher citing a CNN report that “Chicago Police believe Jussie Smollett paid two men to orchestrate the assault,” then discussing the Left’s rush to judgment. “At this point, you’d have to be an idiot to believe any of these claims until and unless there is clear proof,” he wrote.

The next day, Dreher shared a screenshot revealing Facebook had on at least one occasion blocked a link to his post on the grounds that it “goes against our Community Standards”:

You are not allowed to say on Facebook that Jussie Smollett carried out a hate hoax. pic.twitter.com/jnFx7aQFbS

In a follow-up post, Dreher relayed a message from a friend who found his attempt to share the piece blocked. After finding the normal post blocked, the friend tried again with a TinyURL of the link, which was also blocked.

“The type of soft totalitarianism that this company employs in order to silence dissent runs counter to the underlying purpose of communication: to speak and learn the truth,” the friend wrote. “That, of course, means that we may stumble once and a while, which is what I have done on occasion. However, as long as we welcome correction and issue it with charity to others, we all benefit. FB, by short-circuiting that process in the name of protecting a particular ‘narrative,’ harms us all.”

Dreher added that he has deactivated his Facebook account in protest of the incident, and while Facebook has since lifted the block he has no intention of coming back.

Dreher surmised that his post was claimed to have violated Facebook’s “hate speech” language against “Mocking the concept, events or victims of hate crimes,” but noted that he did no such thing. “[T]he entire reason for the post is new evidence indicating that Jussie Smollett was NOT a victim of a hate crime, but rather faked a hate crime,” he wrote.

This is the latest in a long series of instances of Facebook suppressing content that dissents from left-wing orthodoxy. Last month, the social media giant blocked an ad for an upcoming film that takes a critical look at Roe v. Wade, and temporarily suspended the daughter of novelist Marion Zimmer Bradley for sharing a story about a former homosexual’s conversion story.