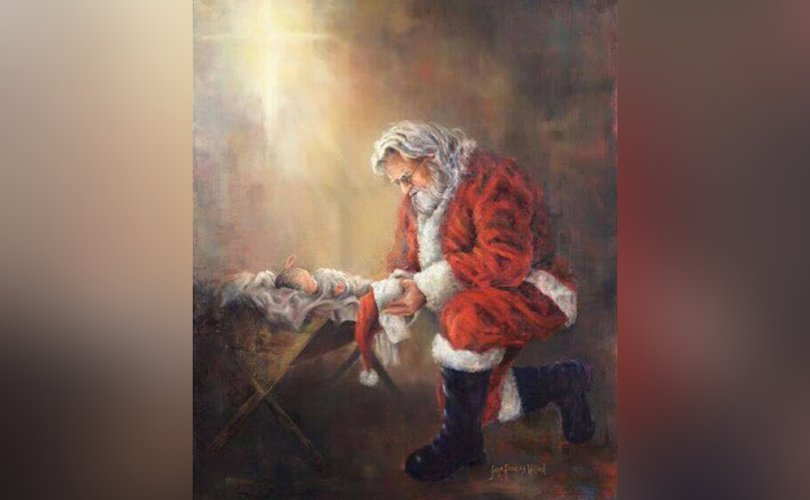 December 5, 2018 (LifeSiteNews) – Facebook has covered over a posting of a picture of Santa Claus kneeling before the Baby Jesus, warning viewers that the photo “may show violent or graphic content.”

A second warning beneath the obscured image of Santa on bended knee, reverentially adoring the Christ Child states, “This photo was automatically covered so you can decide if you want to see it.”

Users can click on a button to uncover the photo.

“We err on the side of allowing content, even when some find it objectionable,” declares Facebook’s community standards, saying it does so in order to maintain a “safe environment” for its “Facebook community.”

It remains unclear why the image of Baby Jesus and Santa was deemed by Facebook to be “violent and graphic content.”

On December 25, Christians around the world celebrate the birth of Jesus Christ that happened 2,018 years ago. Christians believe that Jesus is the Son of God who came into the world to save mankind from sin and to open the way to heaven. Christians consider God becoming man the greatest historical event to have ever taken place.

The image in question — of the Savior of the World as an infant and a popularized version of a saint — was originally posted on December 1, 2015, with this accompanying poem explaining the touching illustration:

My dear precious Jesus, I did not mean to take your place,
I only bring toys and things and you bring love and grace.
People give me lists of wishes and hope that they came true;
But you hear prayers of the heart and promise your will to do.
Children try to be good and not to cry when I am coming to town;
But you love them unconditionally and that love will abound.
I leave only a bag of toys and temporary joy for a season;
But you leave a heart of love, full of purpose and reasons.
I have a lot of believers and what one might call fame;
But I never healed the blind or tried to help the lame.
I have rosy cheeks and a voice full of laughter;
But no nail—scarred hands or a promise of the hereafter.
You may find several of me in town or at a mall;
But there is only one omnipotent you, to answer a sinner’s call.
And so, my dear precious Jesus, I kneel here to pray;
To worship and adore you on this, your holy birthday.

Facebook has a long history of censoring faith-based organizations and individuals.  The social media giant has been forced to apologize for numerous instances of improperly flagging conservative or Christian content as “hateful” or otherwise inappropriate. It has also come under fire for letting left-wing organizations like PolitiFact and the Southern Poverty Law Center influence its “fact-checking” and “hate speech” policies.

Facebook has censored a Christian theology professor after he criticized a video selling LGBT “pride” to children. It has suspended the account of Elizabeth Johnson, a Christian who goes by the name of Activist Mommy, after she called gender confusion a mental illness. The social media giant has also blocked ads for the movie Gosnell: The Trial of America's Biggest Serial Killer, labeling the film about the serial killer abortionist ‘political speech.’

The social networking giant has also banned many LifeSiteNews’ pro-life ads, deeming them too “political” because they showed pictures of pregnant mothers, ultrasounds, preborn babies, and the tiny feet of an infant child held in her mother’s hands.