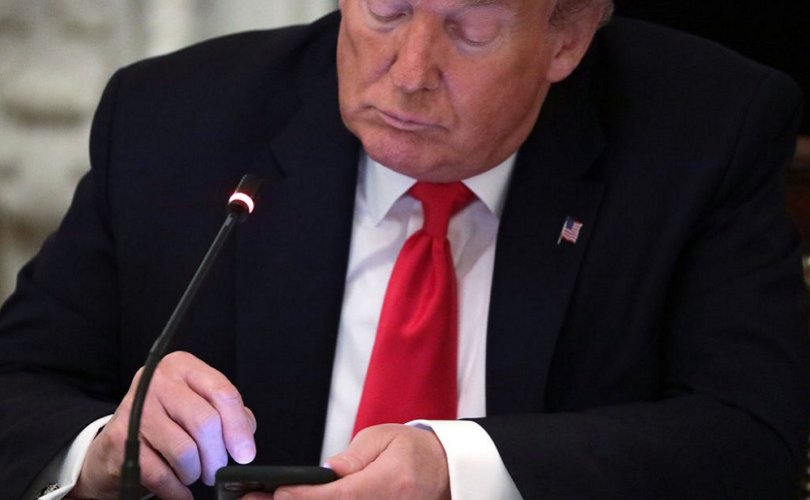 UNITED STATES, June 19, 2020 (LifeSiteNews) — Facebook has censored a post by the Trump campaign that criticized Antifa and its involvement in violent riots around the U.S., with the social media giant claiming that the post violated their policy against organized hate.

The post by the Trump campaign accused “mobs of far-left groups” of destroying American cities and causing mayhem and included an image widely used to represent the group, but which liberal “fact-checkers” identified as a Nazi symbol.

“Dangerous MOBS of far-left groups are running through our streets and causing absolute mayhem. They are DESTROYING our cities and rioting – it’s absolute madness,” the post stated.

“It’s important that EVERY American comes together at a time like this to send a united message that we will not stand for their radical actions any longer. We’re calling on YOU to make a public statement and add your name to stand with President Trump against ANTIFA.”

The image used in the post is regularly used by groups linking themselves to Antifa, but Media Matters, a liberal “fact-checking” organization “dedicated to comprehensively monitoring, analyzing, and correcting conservative misinformation in the U.S. media,” attacked Facebook for initially allowing the ad to run while including an “infamous Nazi symbol.”

The Trump campaign responded, pointing out that the ad is “widely used by Antifa.”

It's also a symbol widely used by Antifa. It was used in an ad about Antifa.

It is not in the ADL's Hate Symbols Database. pic.twitter.com/V4fK8QWHKD

“We removed these posts and ads for violating our policy against organized hate,” a Facebook spokesman told the New York Daily News.

“Our policy prohibits using a banned hate group’s symbol to identify political prisoners without the context that condemns or discusses the symbol,” the spokesman added.

Earlier this month, Facebook promised to “protect political speech, even when we strongly disagree with it” after presidential candidate Joe Biden called for the social media giant to essentially censor Donald Trump’s re-election campaign.

“The inverted red triangle is a symbol used by Antifa, so it was included in an ad about Antifa,” Trump campaign director of communications Tim Murtaugh told Breitbart News.

“We would note that Facebook still has an inverted red triangle emoji in use, which looks exactly the same, so it’s curious that they would target only this ad. The image is also not included in the Anti-Defamation League’s database of symbols of hate. But it is ironic that it took a Trump ad to force the media to implicitly concede that Antifa is a hate group,” he continued.

Trump announced last month that he will declare Antifa a terrorist organization, with the group believed to have played a key role in the wave of violent riots following the death of George Floyd.